Hello one and all. I know that you are still awaiting the next installment of the Dux Brit campaign from weeks ago, plus my last WAB Age of Arthur game, but I have been exceptionally busy and have had no time for blogging until today. And this is really rather special, so I thought it should take priority!

I have recently signed up to be a playtester for a set of Fantasy rules called 'Ride To Ruin'. They are based on Dux Britanniarum and are designed to be a nicely 'generic' Fantasy set that will enable anyone with Fantasy minis to play without being constrained by whether they have GW figures or not, or by the demands of certain rule sets that mean you need zillions of models or big monster things. For me it represents a great opportunity to dust off my old 90s WFB 4th and 5th edition High Elves, as the force I have is not suited to Warhammer Fantasy Battle version 8 and anyway, judging by what I hear about it, I have no desire to immerse myself in that particular GW malarky just at the moment, thank you very much!

So it was with great anticipation that I set up a game against Paul D from the club, a man who loves his Fantasy gaming but is also a little disenchanted with current WFB (though not as much as me!) He's also a superb painter whose Skaven army really is marvellous to behold!

Now, Paul has never played Dux Brit, so this would be an interesting evening! You see, Ride To Ruin (RTR for short, from this point on!) is based on Dux Brit, but has a goodly number of subtle (and indeed not so subtle) differences from the parent rules, so I was kept on my toes all evening remembering what was what!

Still, never one to shirk a challenge I had read and re-read the beta rules and had scribbled all over them to both remind me of differences and to remind me to ask the author a question after the game!

Paul and I used the lists from the rulebook, which has no Skaven list in it...so we used the Goblins, as that seemed close enough. So we had a classic 'crap horde versus small elite' force thing going on! We also used points values... "BOO.,..HISS!!!," I hear you cry! Well, yes, ok...but we hoped that we'd guarantee some balance that way and thus it did eventually prove.

The 'AC' refers to armour class and the higher the number, the better the armour! Yes..this is an addition to the parent rules and influences how easy it is to hit an opponent in shooting and melee.

We chose to play 'The Orb', a scenario from the book, which involves nicking a magical orb-thingy from some ruins. Seemed like a good fun one to try!

To see who is attacker and defender, you work out who out-scouts the other and the winner of this is the attacker. It's based, as you might expect on how many cavalry, skirmisher models, etc, that you have. Unsurprisingly, Paul was the attacker!!!

We rolled for terrain as per Dux Brit and got a bloody river!! Which we didn't want in this scenario as it would completely bugger it up for one side or the other, so we re-rolled and got a far more respectable table. We then deployed our battlehosts for the fight!

The winner of the outscouting thingy can also choose to deploy ambushers or flank marchers so Paul opted for this. We actually made an error in this, as the scenario said no flank marchers on before turn 5, but we let them on in turn 3...Good job, really, as they had a massive impact on the game doing it the way we did and helped us to actually play rear attack rules, more of which later!

We also did a house rule where the Skaven, being used to tunneling around and climbing over stuff, could pass through ruins without penalty (this was to counter the fact that Elves ignore woods, although, note to self, I must ask the author whether he means all woods, as there atre 3 levels of woodland/forest and surely the pointy-eared ones can't just stroll through all of it like it isn't there??!!

Play works exactly as per Dux Brit, with an activation deck and a fate deck. There are subtle differences like the 'Seize the Ring' cards that we pretty much ignored as we simply forgot how to use them in the heat of the game (they add one initiative to a hero using them) and the fact that players can play a number of fate cards at any time up to the level of the hero playing them. Nice touch that works well - do I play them now or save them??

The first part of the game was, as you'd expect, all about getting troops moving...or not in the case of my warrior archers who steadfastly refused to do bugger all for most of the game!!

Soon, we got close enough to do some shooting!! Hurrah...except it was Skaven bows shooting at my valiant spearmen...WHAT??? That wasn't meant to happen!!


Meanwhile, in the centre, Paul launched his first assault...2 groups, one of warriors and one of rabble, into my 3 elite units...


Even though we did this combat wrong, I still kicked mighty Skaven ass, forcing the vile Ratmen to retreat, although the lack of routing or excess shock meant that I couldn't follow up...
Comabt is very similar to Dux Brit, except that certain races get to throw extra dice per group just cos they can (I forgot my Elves could do this all game!!) and of course, the armour class thing means that you are hitting on better or worse than a 4+ depending on how good or bad enemy armour is. You also have to allocate attacks before dicing if facing mixed formations (e.g. warriors and rabble...a fact we steadfastly forgot all night! Never mind...'twas our first game!)

At that moment, the Flank March was revealed. The troops' entry point is governed by a dice throw, so of course, the bloody Skaven arrived right where I least wanted them to...right up my a*se and delivered a rear attack...BANG!

This meant that the Elf right flank became the focus of the battle for the next turns, as the Skaven gradually ground down my formation. Rear attacks are different to Dux Brit too, in that you don't get formations busted, but you lose loadsa attack dice if you can't turn to face...I couldn't, needless to say!!!

Here's a few pics of the titanic struggle... 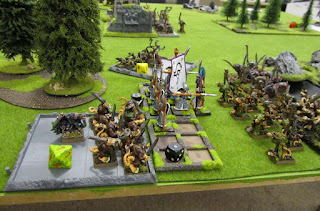 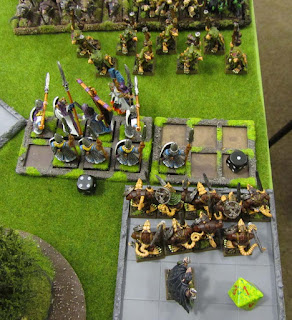 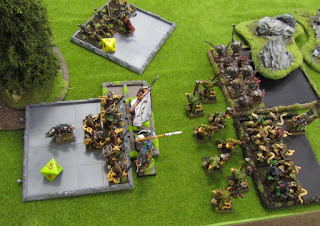 My chaps held on until that mass of Skaven to their front activated and then it was all over. I lost 5 of my 10 morale points from this combat!!

While it was going on though, my Elites claimed the Orb and began a steady withdrawal. At this point, though, it was time to pack away, so we called it a draw. The Elves held the Orb, but getting it back to their base camp was going to be a tricky task...

So, did it play well? Yes it did. VERY well! We got a few bits wrong and I have since clarified a few 'headscratchy' things with the author and a new draft of the rules will result from this playtest (well, a revision was coming anyway, but this game will contribute to it.) but overall, a sound revision to the parent rules that did work nicely! I also think that, ignoring magic, etc, and using human army lists, you could do a rather decent Wars Of The Roses/Hundred Years War type Medieval game with them too!!

Next time, I may add cavalry and a flyer. And then of course, there's magic...we haven't touched that yet. Great set of rules and I'm so pleased to be part of it. More to come, you can rest assured of that!!

From one table over, it looked like a real blast.

Sometime, I am so going to get a nice sized undead force from Mantic...

I would be rather interested to have a go, looks rather snazzy!

Thanks or this, Andy. very interesting. I think this set of rules might be the incentive I need to dust off all my GW LOTR figures, I shall be tracking this for sure.

Looks like something I might be able to play with my son. I look forward to seeing the finished rules.

hmm, interesting - lardy rules with a fantasy flavour is a must own

So what happened to these rules/adaptations? they sound very interesting,and I was thinking of buying Dux Brit for this purpose.

What happened to this adaptation? very interested as I was thinking of buying Dux for this purpose.