Just a final reminder that Hereward Wargame show is at the Cresset in Peterborough, UK on Sunday 1st November and that Andy MacTaggart and I will be putting on a demo-participation game of The Men Who Would Be Kings. We'll run at least two games on the day and can take 4 players each time for derring-do on the Northwest Frontier. We still hope that author Dan Mersey may be able to join us and we hope that Osprey will send us a few pics of the official cover. What you'll definitely see is over a hundred and twenty Pathan and about 60 Anglo-Indian models (including a mountain gun and Bengal Lancers...oh yes!!) and some cool looking scenery (including the lovely Pathan watchtower that James from Oshiro Model Terrain made for me) in a challenging and fun scenario loosely based on an incident from the relief of Chitral.

We [i]really[/i] hope to see some of you there! If you are a follower of this blog, do make yourself known to us if you pop over to play or to watch... :D
Posted by GuitarheroAndy at 16:54 2 comments:

The Men Who Would Be Kings at Hereward Wargame Show, 1.11.15

Peterborough Wargames Club are pleased to announce that we will be running a demo/participation game of the upcoming Osprey Publications Colonial Ruleset 'The Men Who Would be Kings', by Dan Mersey at the first ever Hereward Wargame Show at The Cresset in Peterborough on Sunday 1st November.

This game is fully endorsed by Osprey and as far as we know is the first public outing for the rules anywhere. We are also very much hoping that author Dan Mersey will join us for the day!

The game is set on the NW Frontier and pits and Anglo-Indian field force against a large Pathan force. It's a tricky scenario for both sides!

We will be able to accommodate up to 6 players on the day and people are welcome to pop in and out of the games as they want, so there's no commitment to playing the game all the way to conclusion if you don't want to.

We very much hope that some of the readers of this blog will be able to pop over and see us. Andy MacTaggart and I will be running the game and we can promise a good game! We ran our first play test tonight at my house and will be running another at the club on Monday. The first test game went really well, which is a good omen!

Here's a pic to whet the appetite... Apologies for poor lighting and for some unfinished models, but we are still finishing a few bits and pieces off!! 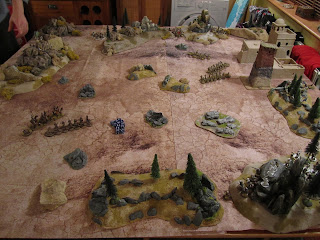 Posted by GuitarheroAndy at 15:59 3 comments: