As I am out later gigging with my current bunch of ageing rockers known as Sidewynder, I thought I'd post quickly now, as I'll be in no fit state tomorrow.

2014 has been an interesting year. I have suffered major problems with my painting mojo this year and have actually achieved very little. On the plus side, I have made decent inroads into my Colonial collection and the LoTR forces continue to grow at snail's pace. Aside from that, very little. This is a shame as I have a lot of French Indian war/AWI skirmish stuff I want to start gaming and I had hoped too have got somewhere with that, but to no avail.

On the plus side, 2014 has seen a major new gaming interest: Rob Broom's War & Conquest. This has pretty much replaced WAB as my ancients/dark ages game of choice, although I still enjoy Dux Britanniarum and Dux Bellorum. I also enjoyed trying out Lion Rampant and hope to play more of that in 2015.

1. Continue to expand the NW Frontier collection. I need to finish highlighting & basing 12 Gurkhas in the short term, then move onto a Mountain gun and about 60 more tribesmen, of which 30 have been started. I do have a couple of chaps at the club keen to do a bit of gaming with these.

2. Continue with the LoTR collection. I have decided that my recent 'scour EBAY for painted Orcs to tidy up' is the best way to build up the evil forces. It's not cheap, but it might mean that I get a few games in this side of 2020!!! The Elves, well, we'll keep on with those as and when. I do want to get 12 more and a hero done in the short term, as that'll give me enough for a few LoTR SBG games with son and heir.

3. Finish the Saxon characters I am painting for Andy M at the club...he asked me to do these in September and I have thus far got them undercoated!! Good job he ain't desperate for 'em!!!

4. THE BIG ONE!!!! Complete the late Roman/Arthurian/Early Byzantine/5th-6th century barbarian army lists I am drafting for War & Conquest. I have submitted Romano-British, Early Saxon and Patrician Late Roman (Aetius, et al) to Rob already and am in the middle of Belisarian Byzantines. This latter list is important because Andy MacTaggart and I have plans to do a demo game at our club's planned wargame show in November based on a battle during the Ostrogothic Siege of Rome during Belisarius' Gothic wars in the 6th Century. I will be the Byzantines and Andy the Goths. I therefore need to paint 3 more cavalry units for this (regular Roman horse archers, Roman Bucellarii and Hun mercenaries) and finish the army lists. This could be quite an exciting project and I am about to order the final 12 models from Footsore Miniatures who have taken over the Musketeer miniature ranges. The rest of my army will be composed from my current huge force of late Roman/Arthurian models as they are more than adequate for the army of Belisarius in Italy in the 6th century. This will be a tall order, as 36 cavalry is a lot to paint! To be fair, I can get away with doing 24 and leaving the Huns, so we'll see... Also, 'dip & highlight' is a much more speedy method, so it's not an impossible task. I also have to design the scenario and write a Goth army list. I can see lots of play tests for this taking up most of my gaming time this year...

5. Paint enough models for a Songs of Drums and Tomahawks war band. I have enough Indians for half a war band already but want to paint some AWI American riflemen to go with them. The latter are undercoated and the faces are base coated, so they are under way. You only need 10 models or so, so it's not impossible. They would make a good break from the Byzantines!!

I realise there's a lot to do there. I probably won't get anywhere near most of it, although I am slowly coming out of my painting slump. My New Year resolution is to spend less time on the laptop in the evenings trawling the internet and more time painting and list writing (and playing guitar, as I have a reunion with my old band 9 Lives coming up in Spring/Summer.) If I can manage to use my time more effectively, most of the projects above might get at least some progress in 2015.

Whatever you plan to do in 2015, I hope that it's a very happy, healthy and prosperous year for you.
Please keep looking back at my blog, as I will try to get updates going a little more regularly next year, especially as I get more models painted.

Posted by GuitarheroAndy at 06:51 3 comments:

Hi folks. I hope that you are all enjoying your Christmas celebrations and that Santa brought you some cool gifts.

I have been busy over the past few weeks painting Lord of the Rings models, having been inspired by the latest Hobbit film. I know lots of people think the movie is a steaming pile of dingo kidneys, but I loved it! Anyway, I have been busy with completing some High Elf spearmen converted from Guards of the Galadhrim Court. They have been painted in my current 'dip & highlight' style. I like them - they aren't the best GW sculpts, but I think my paint job and the addition of shields has made them look pretty cool... 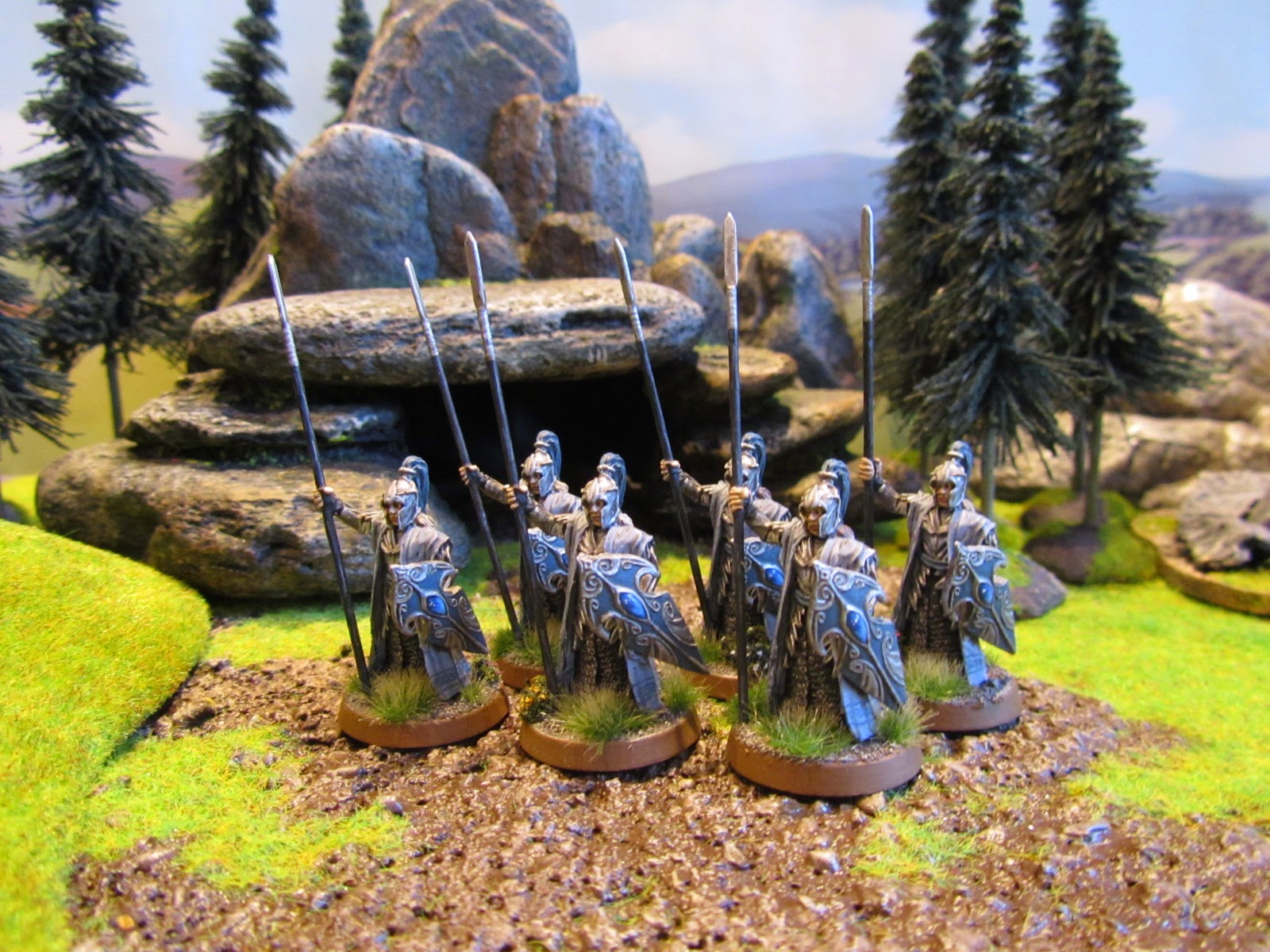 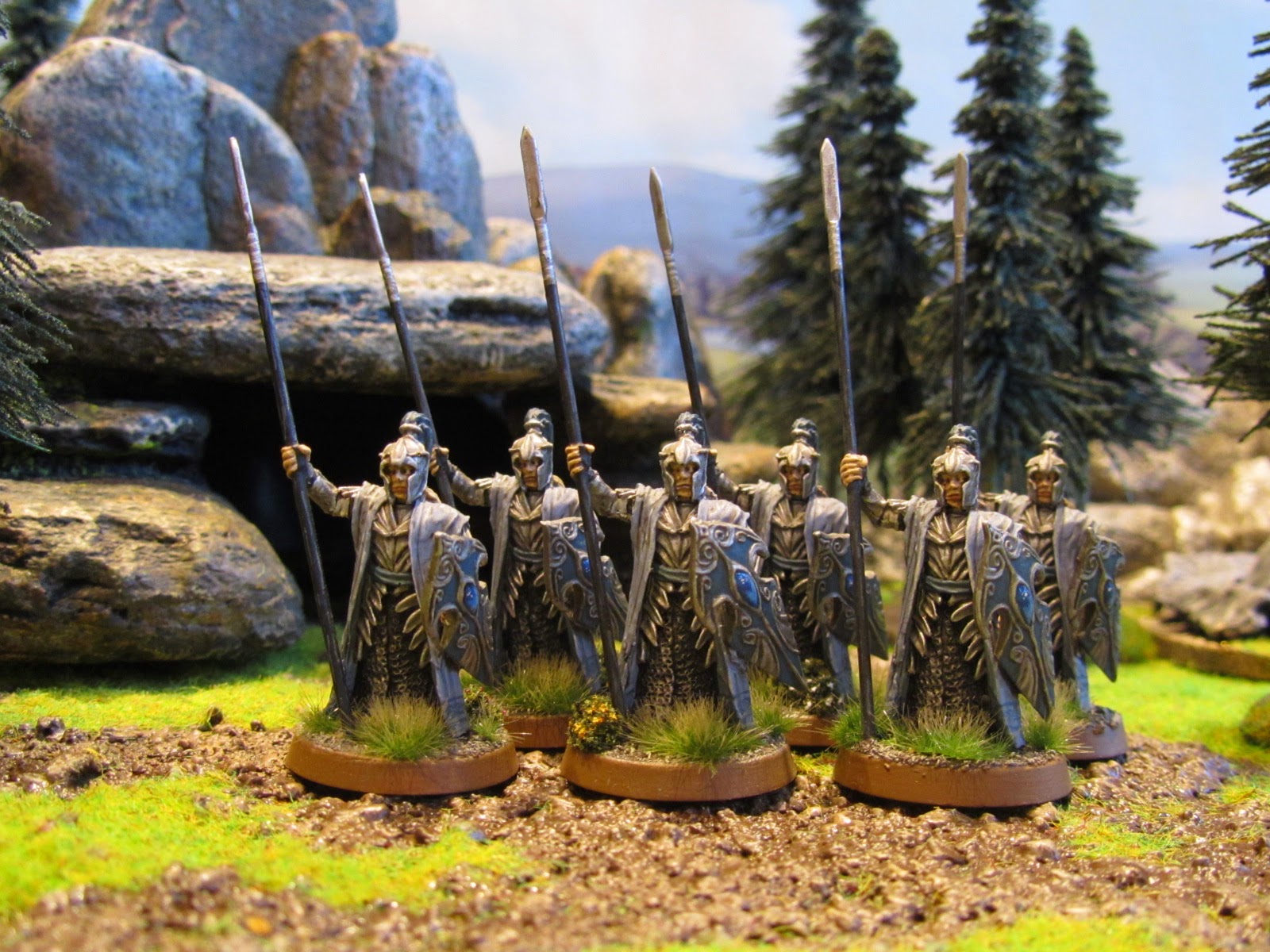 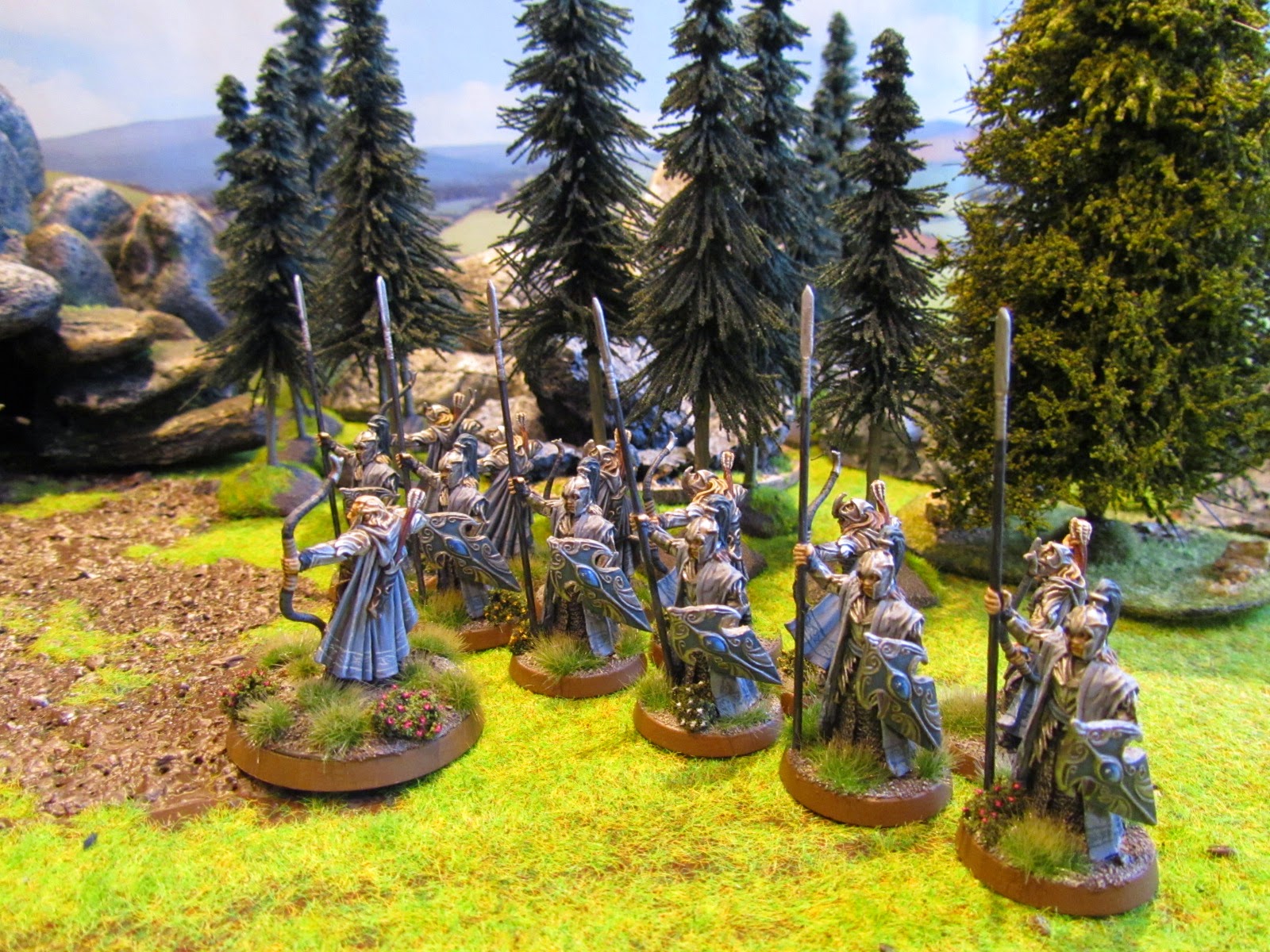 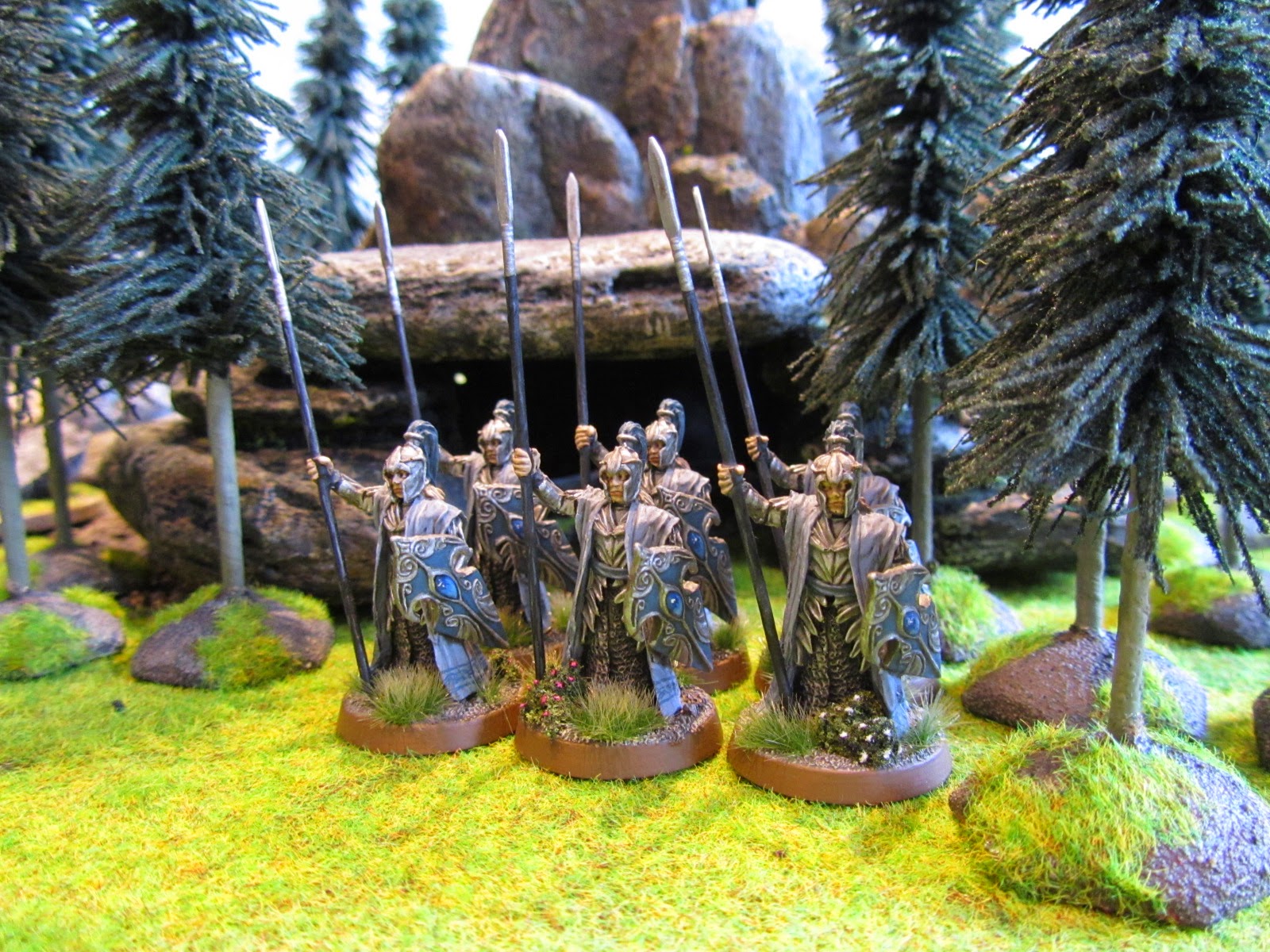 I have also been working on my evil forces as well, prompted by a chance encounter on EBAY. I had been worrying for a while about the amount of time it is going to take to get enough LoTR models on the table for a game when, quite by chance, I came upon 24 painted Morannon Orcs. They were not cheap, but had been painted in a fairly neat base coat, ink wash and dry brush style. Anyway, I took the chance and clicked 'Buy it Now.'

This is what they looked like when they arrived... 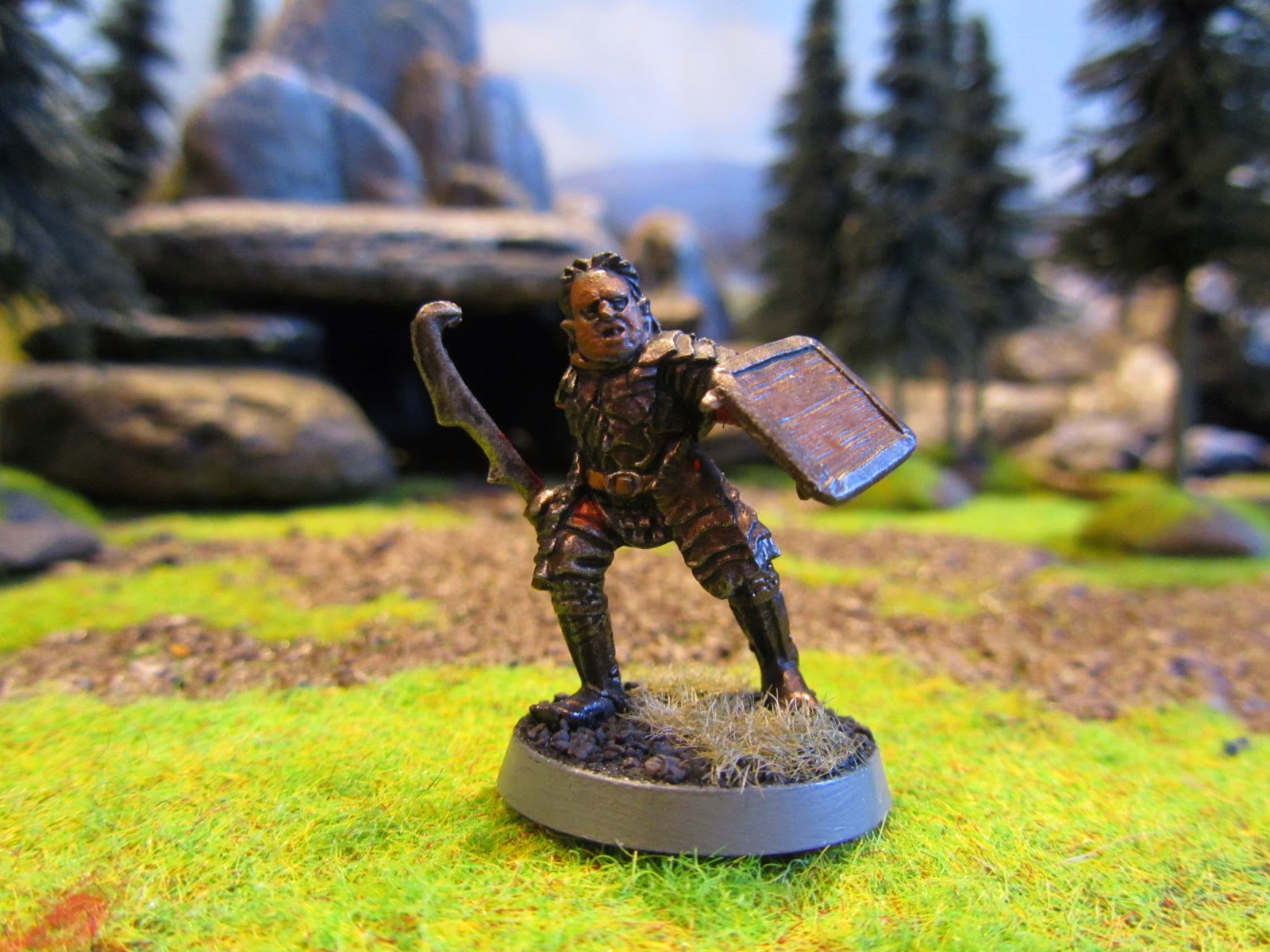 So, I set to work adding proper highlights and tidying up areas where the dry brushing was dodgy. I also repainted the shields black, Dullcoted and rebased to match the Orcs I had already done. Here are a couple of close-ups after the surgery was completed... 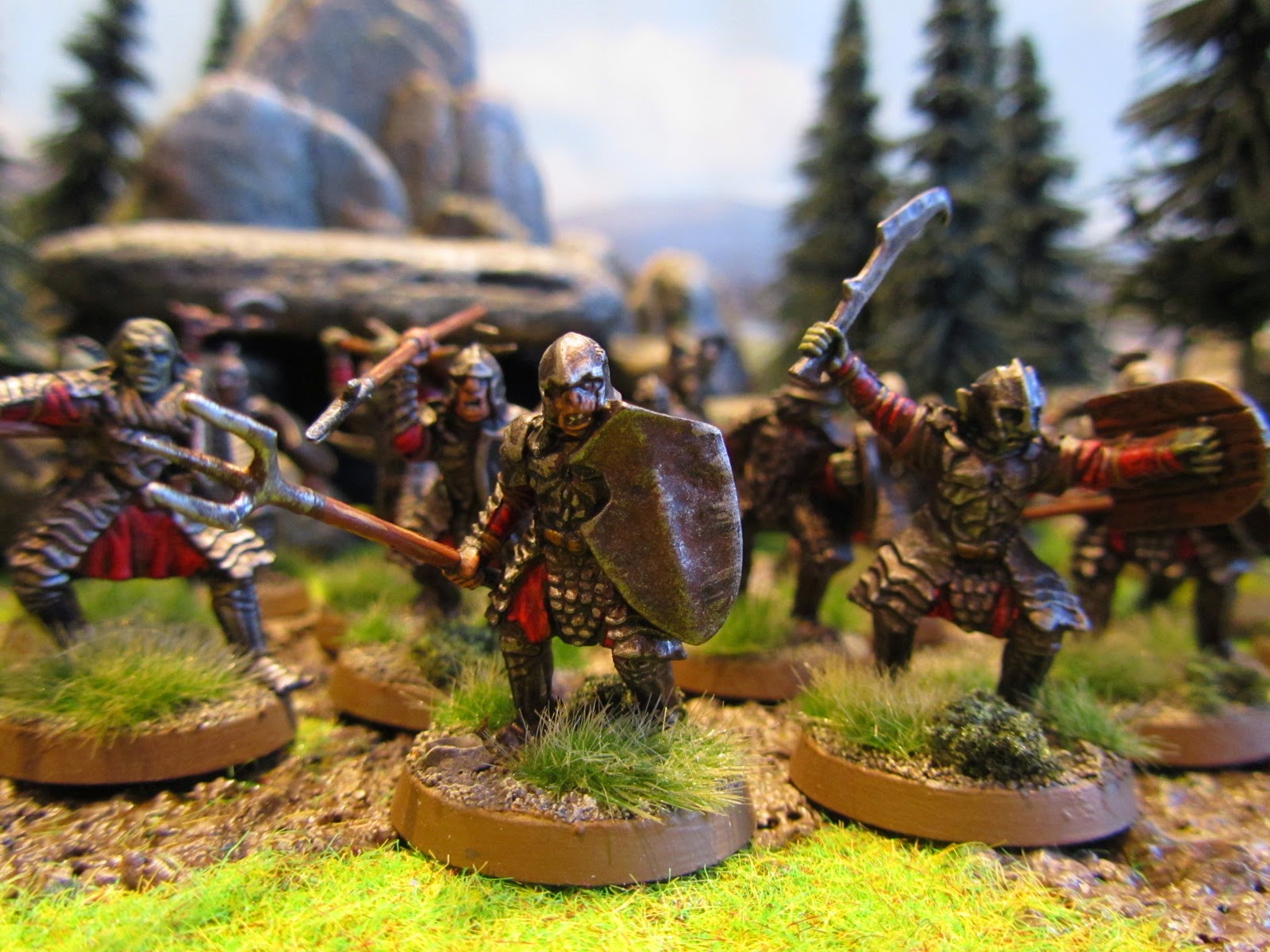 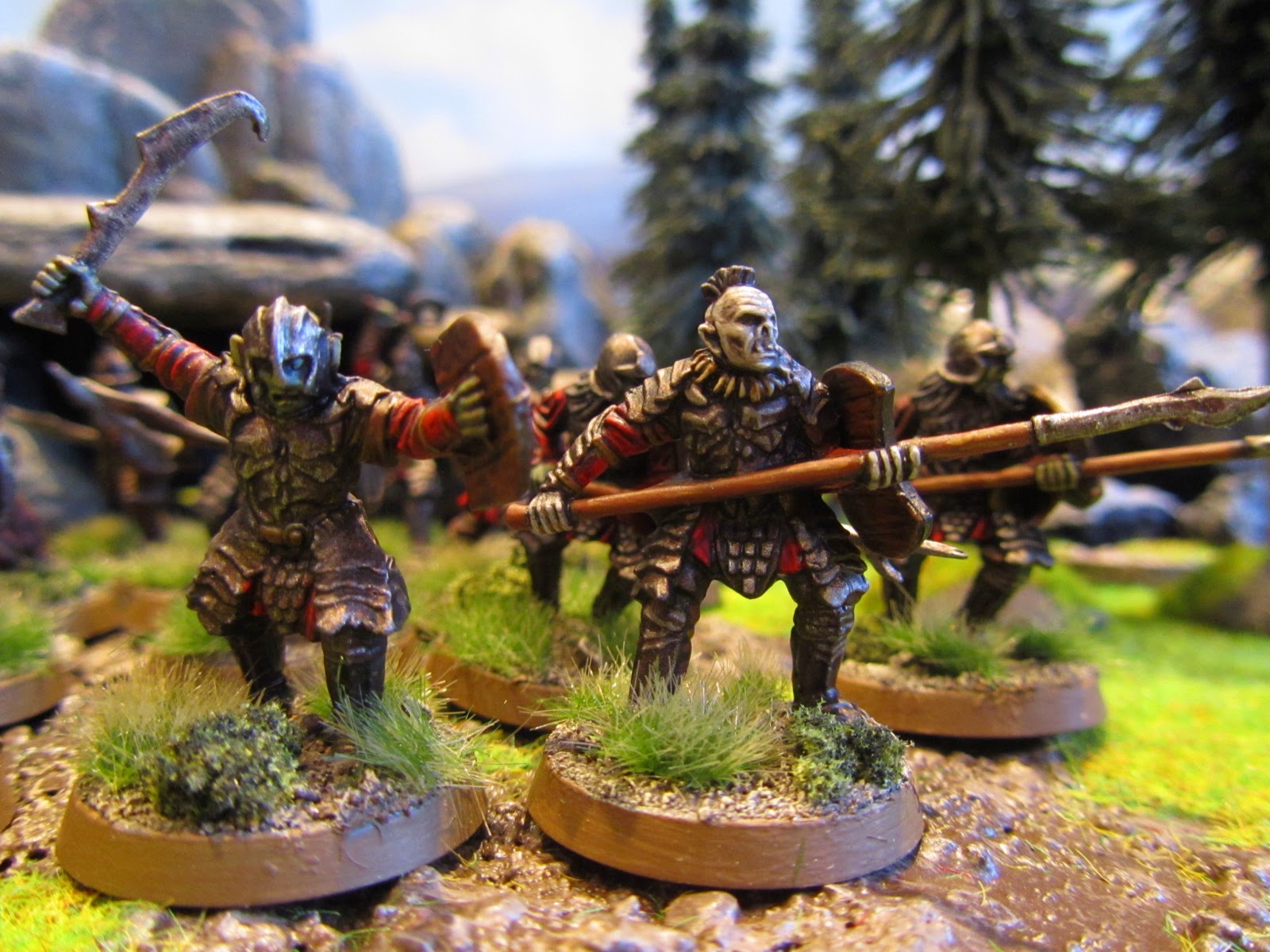 Not too shabby, I think you'll agree!! I have 8 more to do by which time my Orc force will have quadrupled in about 4 evenings painting time...result!!!!

Here are a few 'action shots' of the entire LoTR collection thus far... 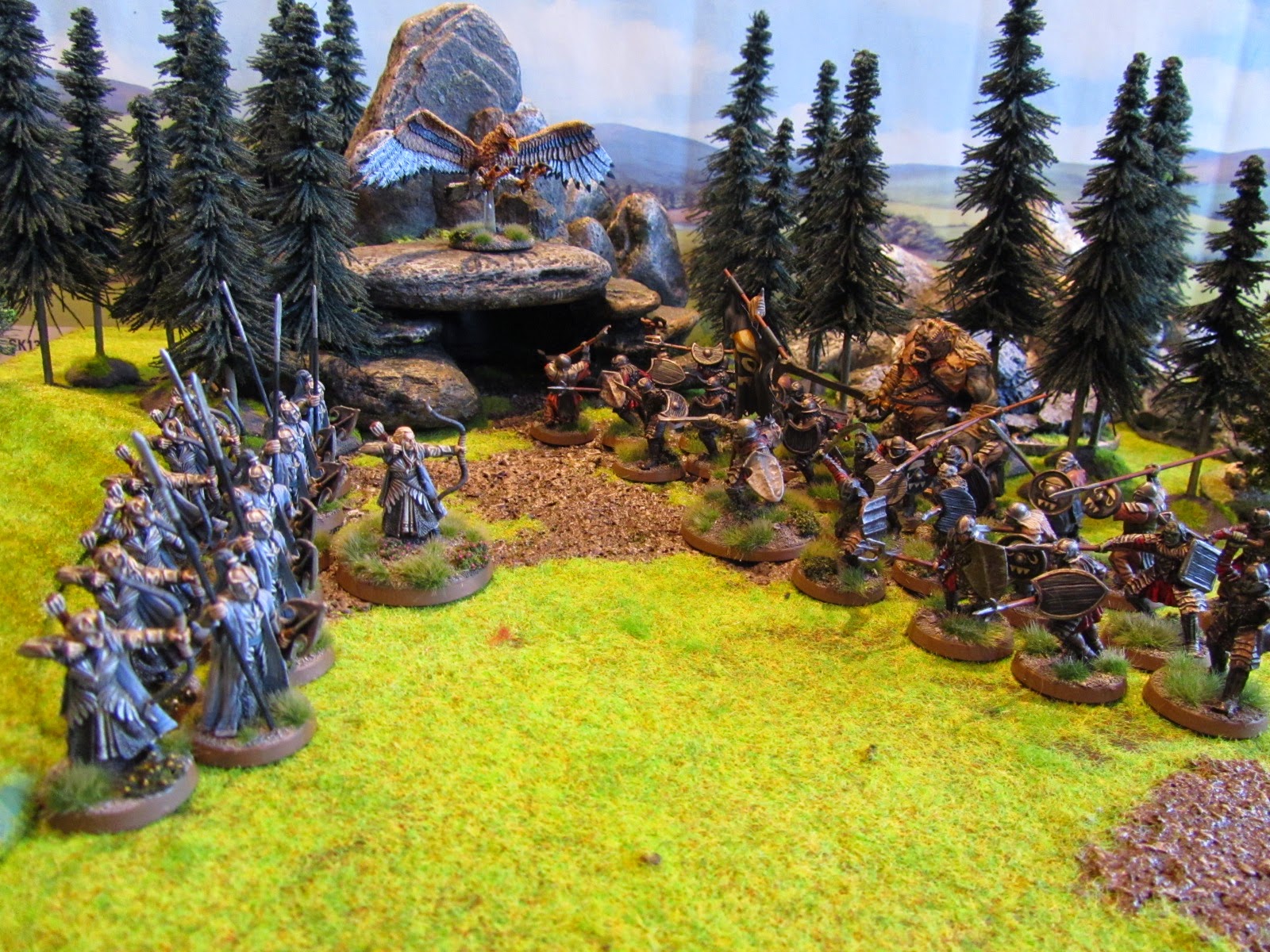 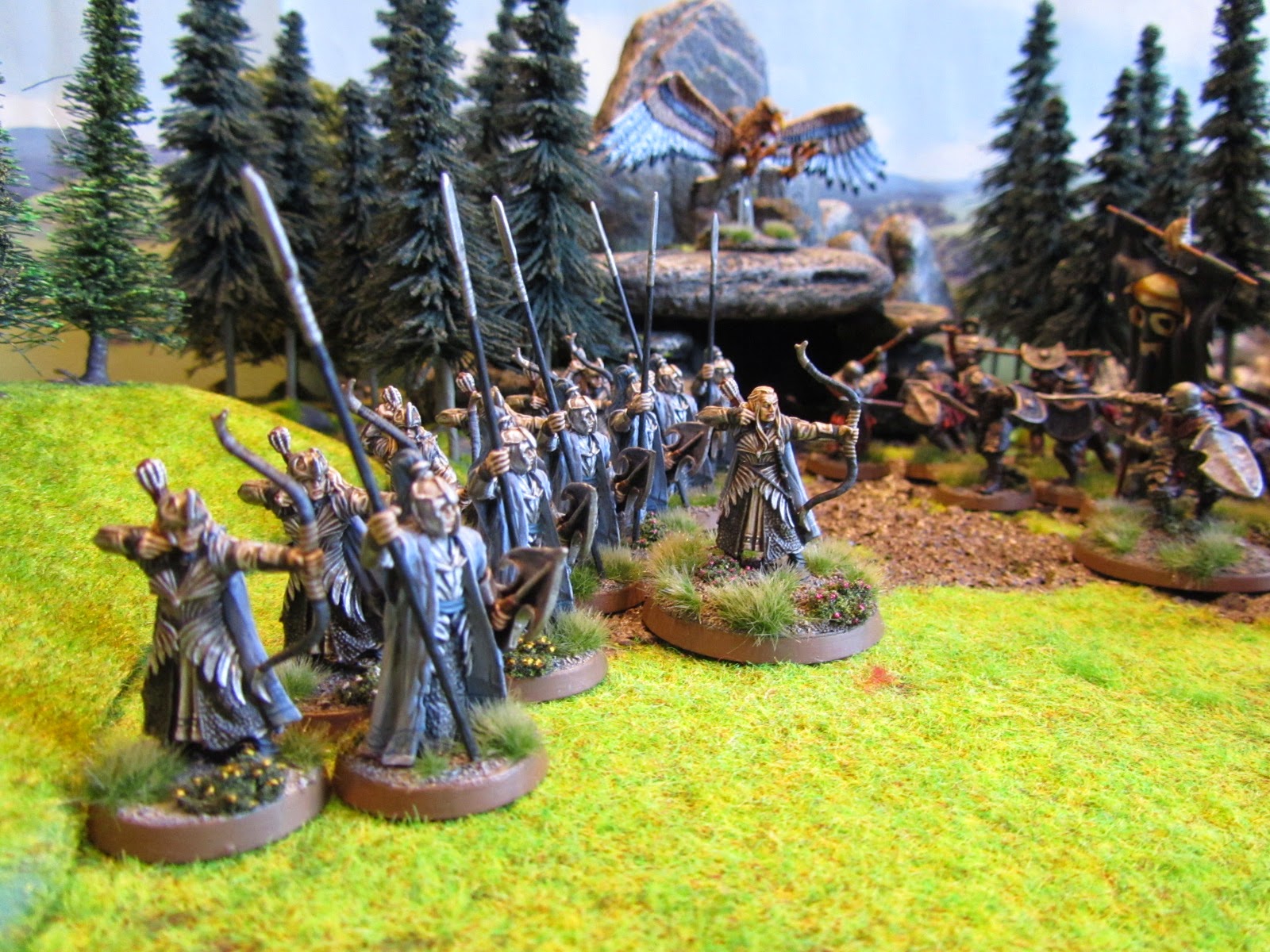 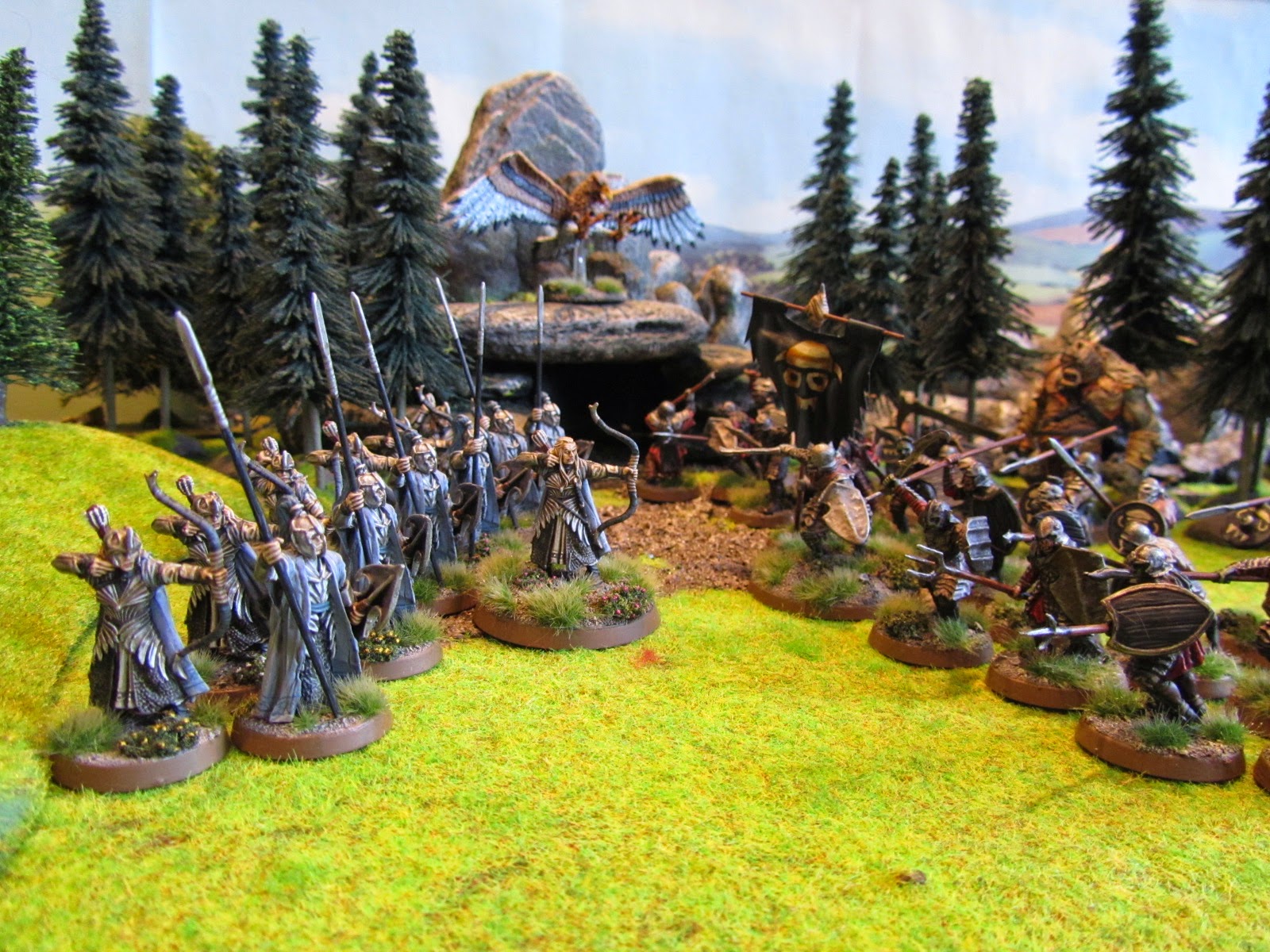 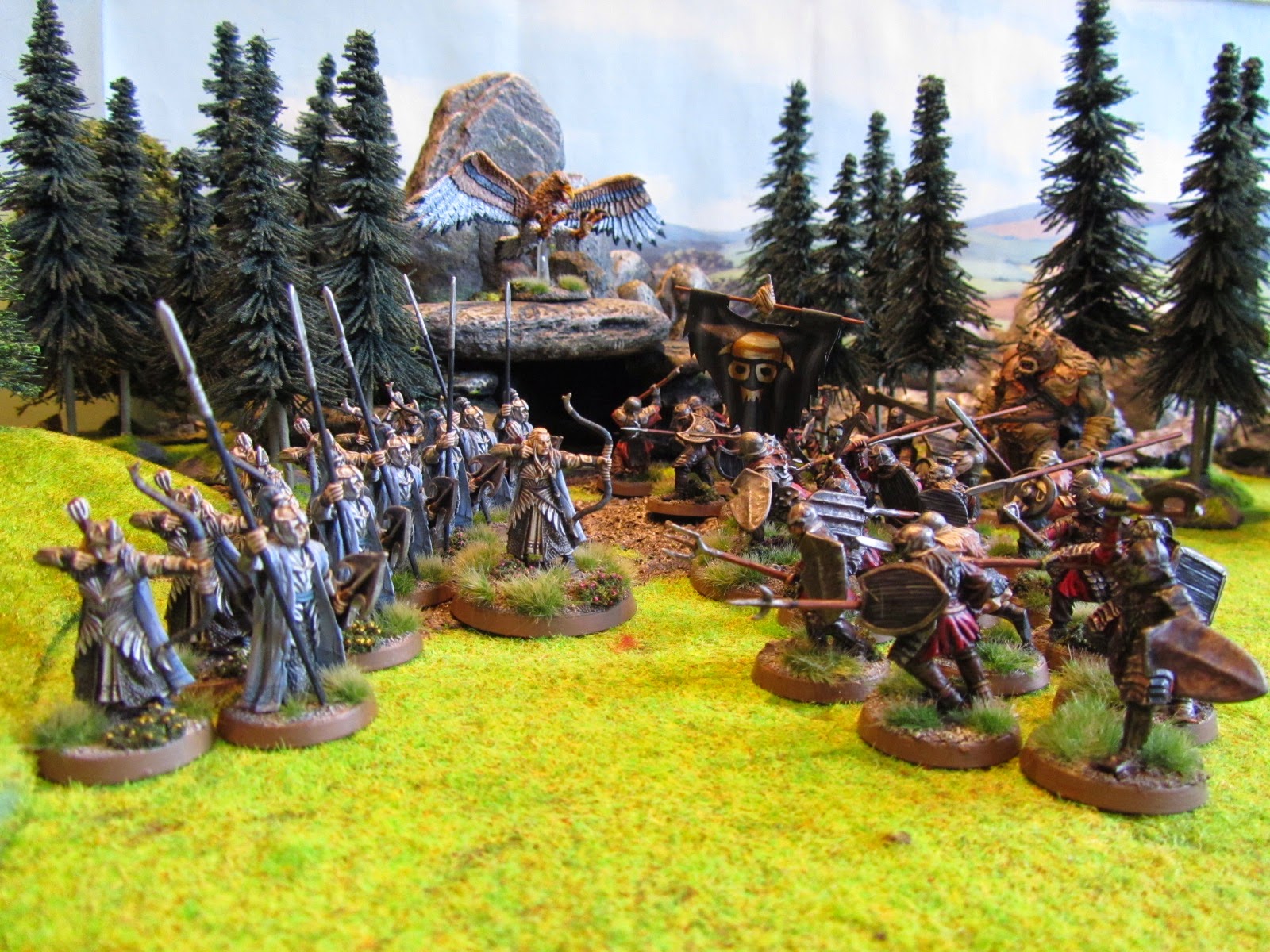 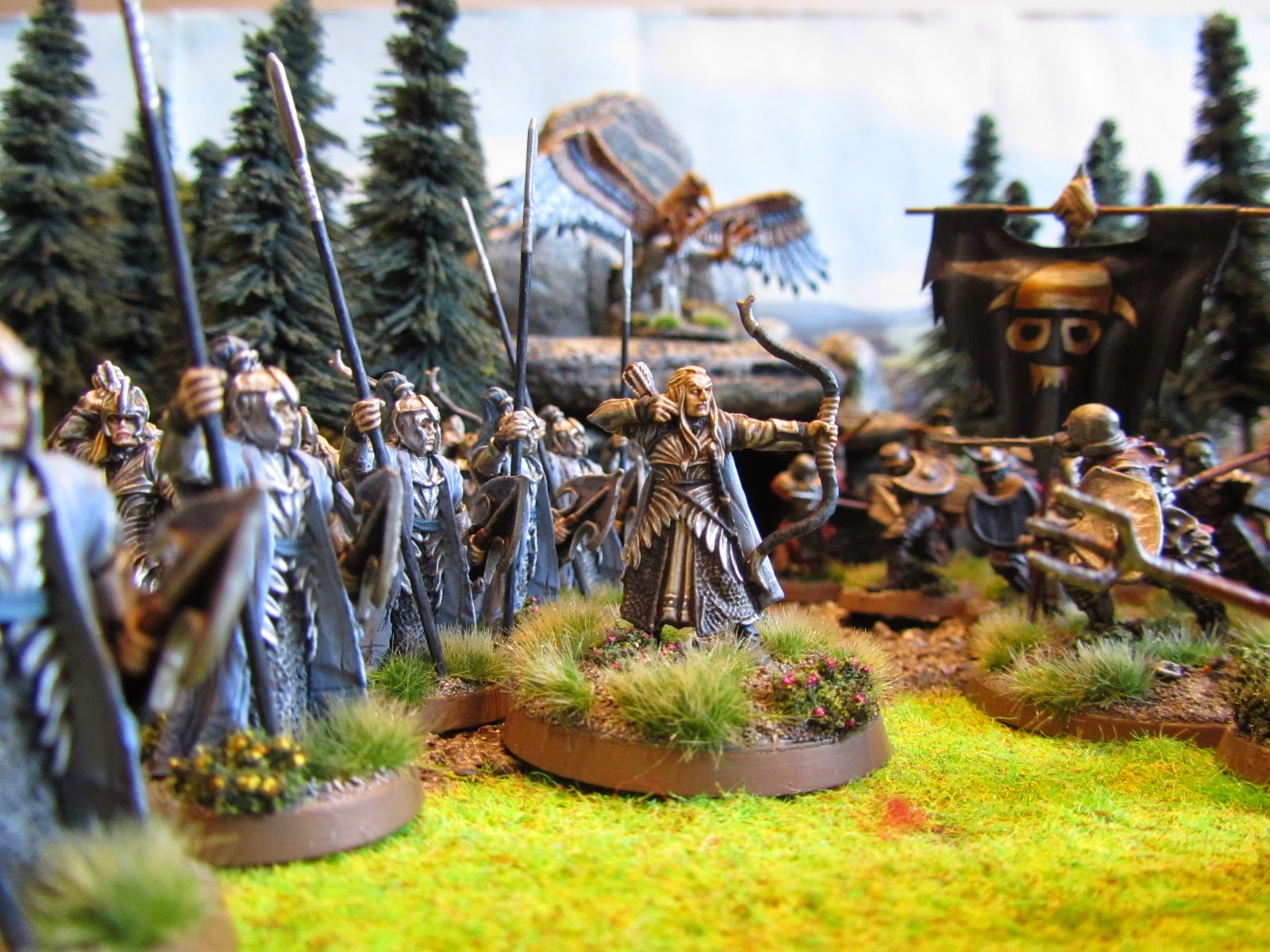 Finally for today, just before Christmas, Andy Mac and I reconvened for another play test of the War & Conquest Romano-British and Early Saxon army lists. This time we took 2500pt armies which gave me the chance to try armoured milites and Frankish allies. The game was, as always, a cracker. However, it did expose the fact that well armoured Romano-Brits are pretty well certain to grind out a win against the Saxon Duguth simply by virtue of better saving throws and by being close order infantry. This means they need to be limited in Romano-Brit lists. in fact, I am toying with the idea of forcing the Romano-Brit player to field at least one unit of Pedyt in any army list above 1500pts. The Franks were, predictably, slaughtered when facing foot Gedriht. The KA4 of the Gedriht means that they are invincible in a straight fight (although Welsh Teulu will be their equal when I write their list) and in this game, Andy's unit strolled through the Franks and one unarmoured milites unit. His mounted Gedriht came off distinctly worse against the mounted Romano-Brit Commanipulares, helped by the Equites, whose flank charge was a joy!!

Overall, we had to stop due to running out of time. Andy had killed 2 of my combat units, but I had killed more. However, he achieved his objective whereas I did not. Next, we will use different forces - Andy will try some Geoguth in his army and I will field a Vortigern list with Saxon mercenaries and Pedyt...


I hope you enjoyed the update. Next up, more Elves and orcs, plus news of 2015's big War & Conquest project!
Posted by GuitarheroAndy at 03:12 3 comments: