Second Foray onto the NW Frontier

So, last Sunday, Cameron and I played a second NW Frontier game using my 'cobbled together on the spot' rules - one of these days I must re-read LoTOW properly and actually use the rules properly with this period, as, with a few weapon tweaks (why do breechloader rifles have to take the same amount of time to reload as a musket???!!!) it'll work jolly fine for Colonial bashes!

So the scenario this time was a 'retreat from Maiwand' scenario, with the Brits being the remnants of an army that had been trashed, trying to get to safety.

We had great fun once again, but this time, the resurrected Sgt Cameron did not heed Daddy's wise advice! I advised him to, in effect, do a 'covering-fire and move' thing where half his men shot and the rest ran - he did that for a turn...then just decided to shoot me up...and had some really (uncharacteristically) bad dice which meant that I got up close and personal too quickly and chewed him up, wiping out his gallant command at the very wall of the village.

Again, apologies for poor pics. I was still using the phone!!


The evening of this game, I finally applied a highlight to all the Pathans. I dipped them AGES ago - my first dipped models and literally did dip them! They look a lot better with the highlights, I can assure you! Once I have based the 4 Sikhs, dipped and highlighted the remaining 8, have finished a (layered painted to match his unit) British infantry officer and have dipped and highlighted the 25 Pathans that are being basecoated as we speak, I'll post some new proper pics.

Am also doing some NW Frontier terrain, specifically loads of rocky hills, so I'll post some pics of those when they are done. I basically intend to be able to take this all to the club to run some (initially) skirmish games using modified LoTOW, working up to decent size games of T&T by March/April next year. The basic painting of troops is going well and is quite quick - I also have 12 Ghurkas ready to dip. There are then 2 units of 12 Castaway Arts Sikh Infantry, a unit of 12 Foundry Guides Infantry, a unit of 12 Pontoonier Brits, a unit of 12 Perry Highlanders, a Perry Mountain Gun and  a Foundry 9pdr gun, plus 2 units of 6 Bengal Lancers (half Castaway Arts, half Perry), a Foundry Maxim gun plus a mountain of Pathans. This doesn't include 2 units of 12 regular Afghan infantry, 1 unit of Afghan regular cavalry, 2 guns and a unit of Pathan cavalry up in the loft!

The priorities after the current crop will be a unit of 20 Pathan Ghazis and a Mullah, then the Mountain gun, a British Colonel, a British mule-train and 6 Bengal lancers, plus a unit of 12 Pathan sharpshooters and a unit of 20 warriors and we'll see where we are. If I can get them done by March, we will be on track. Of course, my interest levels will wane as the new Hobbit movie propels me back to my LoTR stuff, so we'll see how we get on...
Posted by GuitarheroAndy at 02:40 1 comment:

First Foray Onto The NW Frontier

So, it's Saturday and the missus has toddled off to her school reunion wot she has organised via Facebook, so me and Cameron were left at home on a cold day with nowt special planned.

Now, he's been watching with interest as I paint my NW Frontier models and today was asking about them, so I dragged out the old Kenneth Moore movie classic 'NW Frontier' to watch after lunch. Obviously, as he's 5 with the attention span of a gnat, I fast-forwarded the dialogue-heavy bits and focused on the action and he LOVED it.

So, when I asked if he'd like a game using my NW Frontier models after we'd dashed to Sainsburys, he was well up for it!

So, we got back, I left him in the lounge with a snack and set up the table... Apologies for photo quality, as I'm using my old Nokia (the missus has the camera) The table is covered with a piece of upholstery vinyl I picked up from the market. Truth to tell, it's a bit too dark and a bit too 'yellowy-brown', but it's still cheaper, easier to store  (and quicker to do) than making 8x4 foot of sand-covered MDF. I may see if I can sponge print it with some lighter colours, as I think the material would take paint and still roll up. I will test the edges (I actually bought 3 metres length) and see. But it did fine today as it was. 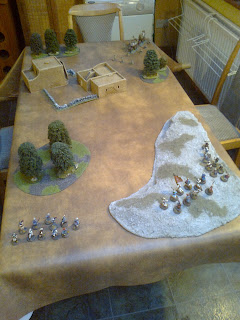 The Imperial forces consisted of 10 British infantry (incl Sergeant Cameron as force leader) accompanied by 4 Sikhs (including a Havildar - the Indian Army equivalent of Sergeant, for those for whom Colonial gaming is a mystery) who had to secure the safety of two supply wagons in their care and drive off any Pathans who attempted to molest them.

They were opposed by 26 Pathans, of whom 8 were 'marksmen' and 10 were sword-armed Ghazis, with the balance being rifle/sword armed warriors. Their job was to loot the wagons and kill all the British/Indian troops.

I used a 'make it up as you go along' ruleset based mainly on Legends of the Old West, with some Warhammer-isms thrown in. I made the British troops uber-good with shooting, as this was supposed to be 1897 and they would have had Lee Metford magazine rifles, whose range and rate of fire blew anything the Pathans had out of the water! They were therefore allowed to move and fire and did not need to reload. The Sikhs were not allowed to move and fire but did not need to reload, as they were armed with Martini Henrys.

The Pathans were not allowed to move and fire and they did have to reload, as I treated them as having Enfields or Jezails. This meant that, in the first few turns, once the Brits reached the village and began defensive fire, they killed tribesmen like there was no tomorrow. The Pathans could do little in return, although I had bad dice on a few turns of shooting.

However, once the Tribesmen reached the wall, it became a different tale and the vicious hand-to-hand fighting went the tribesmen's way...


Sergeant Cameron died bravely, surrounded on all sides by 4 enemy warriors (who he actually beat off in one round of combat!) and will receive the Victoria Cross for his heroism!!

I obviously helped Cameron with tactical advice ("Just go into the village...if you don't, your force will be dead in 3 turns!" and  "Line the walls and shoot with as many men as possible" - to be fair, he decided for himself to get men on the roof!)
It was a lovely way to pass an hour on a dull, cold Saturday. Cameron really enjoyed himself and we are going to have another game tomorrow morning!
Posted by GuitarheroAndy at 13:20 8 comments: