So, last night was campaign night! My 3rd game (second in the campaign) of Kings of War. As my Arthurians are being repaired, I dragged out the El Cid models for the evening. I also decided to, err, 'customise' myself a hero on a 'winged beast', so up into the loft I went to drag out the old 4th edition WFB High Elf dragon ( long since missing its Prince Imrik rider) and onto this I blu-tacked (yeah...I know!) a Foundry Norman knight I'd painted years ago for an 11th century Saga Welsh force that got abandoned. I painted him a shield in the El Cid colour scheme and 'Bob was the proverbial uncle'. At least, it would do as a temporary measure... I do quite fancy painting an Arthurian hero to place atop the beastie as the Dragon imagery in my Arthurian banners would go well with an enormous red dragon model!!

Anyway, the army I took was different this week. As well as the winged beastie, I took a mtd hero with Diadem of Dragons giving him a breath attack and 2 wizards. I took 3 regiments of knights, one with a terrain negating item, one with 'nimble' so it behaves like light horse and one with 'The Fog' so the impact of enemy shooting against is reduced. They were supported by 2 troops of light horse, a phalanx horde and an archer horde and, of course, my war mammoth!

I ended up in a 3-way game against Mike W and his Kingdom of Men force and Grahame who was fielding a Kingdom of Dust (or something like that) undead army - basically WFB Tomb Kings. We set up on a 8 x 6 table and off we went with a 'kill 'em all' scenario.

After last week's humiliation, this was very different - unpleasant though it was, the hefty defeat had taught me lot about KoW. I had read up on flyers (and how to deal with them, though that wasn't necessary in this game.)

We didn't get many turns in as 3-way games take a while, but it was essentially a drawn game, with none of us scoring over 10% of the army total difference over each other, although I can closest, being 10pts short of beating Grahame. Highlights included my mammoth facing down the undead Behemoth (essentially a skeleton Triceratops). The mammoth got flanked by skeleton light horse which saw its demise, but I was then able to frontally charge the Behemoth with knights, while flanking it with the general on winged beast...cue dead Behemoth!! On the other flank, Mike managed to sandwich the undead chariot horde with his own chariot horde, a knight horde and 2 units of guard infantry!! Cue about 135 attacks on the undead! We proceeded straight to the nerve test!!

Overall, a more balanced game. It was quite fun and I'm learning much more about how the troops move and how to get things working. I still suspect that in a game against the more experienced players, I'll get proper mullared but at least I'll have more idea of what I'm doing. Still not sure my army is that well balanced the way I picked it tonight, although it felt better than the last twice I have played.

Here's a couple of pics from the game last night. 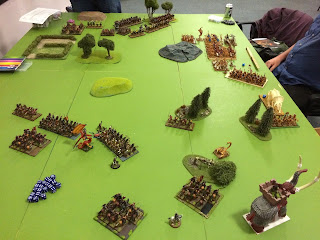 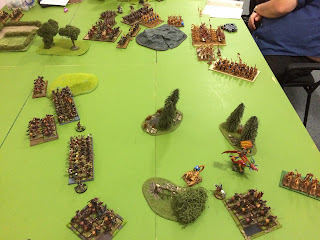 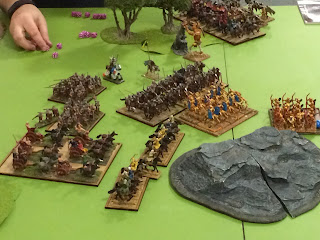 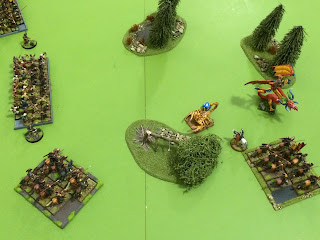 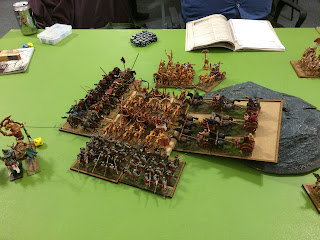 
Yes, all the models from last Monday's 'unfortunate incident' now have spears replaced and the job of going over them to 'black out' the chipped parts (and undercoat the new spears) has begun! This is a shame as it has deflected my attention from the unit of Elves I was about to do for my Dragon Rampant Wood Elf force and, more importantly, the start of my big Indian Mutiny project that I am really looking forward to doing.

Still, I need the Arthurian models for a War & Conquest event in September and they are doing double duty as my Kings of War army (although El Cid knights will be called up for duty for tomorrow's campaign game) so I need to bite the bullet and get the done.

Speaking of Kings of War, there'll be more on that shortly. I lost an entire 2000pt army in 4 turns last week in possibly the least enjoyable wargame I have ever had. The fact that this was largely down to being beaten by the rules and army selection worries me, although unfamiliarity with rules mechanisms doesn't help. Still, the chap I played did tell me that, of the 3 games he'd played, I was the only person thus far to destroy even one of his units, so that was a tiny bonus (and he's a lovely chap too, so it wasn't like being gloated over by some tournament crazed buffoon, far from it.)  He played with The Brotherhood, essentially Brettonians... It was rather like the battle of the Somme, as I advanced into the teeth of 60 arrow shots per turn (all armour piercing as well). The archers also count as a phalanx because of the 'stakes' they deploy, so negate knights' charges. Ok...fair enough on first turn of combat, but these guys always count as phalanx, so even if they've been pushed back (and away from their stakes, of course) they STILL negate your knights' 'Thunderous Charge' in subsequent turns...very silly!!! Anyway, he had 2 hordes of these, 2 siege catapults and 2 regiments of kick-ass knights. But the worst thing was the 2 heroes on pegasus that aren't 'individual' heroes  but count as Monstrous cavalry (so they can happily fly into the rear and they then get triple attacks on you!) AND he had taken a horde unit of the same sort of thing as well. I could do nothing but watch as I was systematically taken apart, unit by unit. Even when I did get into combat, my knights were so shot up that the enemy archers routed them in a counter charge (my own charge being weakened by the bloody phalanx rule!) Ignominious defeat...

Still, it was fun fielding the new (partly painted...another thing I can't finish cos of the repair project) giant War Mammoth... It kills things fairly adequately and looks IMMENSE. Pictures when it's done, I promise!!

Anyway, campaign game 2 tomorrow. No doubt I'll be the target of various pre-battle political things so that could end up being interesting!! I suspect that using an historical army in this campaign will prove my undoing as it lacks enough nasty stuff (especially flyers) to enable me to deal with the horrible things in my opponents' armies. I also suspect that the lack of archer models I possess will be a downfall as well, as shooting seems to be a key thing in these rules - possibly far too important given that it's based on typical Fantasy warfare...

Well, that's enough rambling on for a Sunday morning. I plan to sort out the terrain boxes today - bought some new trees and new stone walls at Partizan last week and need to cull the damaged old stock from my collection and repackage it for easy storage...
Posted by GuitarheroAndy at 00:41 2 comments:

Thank you for your many sympathetic comments!! My misery has now been replaced with embarrassment at being such a clumsy muppet!!

Having stayed up into the wee small hours I can confirm that all is not so bad. Only 3 models are virtually beyond repair and that's a combination of weakened horse limbs and the fact that the horses were painted so long ago that I no longer remember what shade of brown I used and anyway, GW don't make those shades any more! I do have spare unpainted horses, though ...

So, it could have been MUCH worse!!
Posted by GuitarheroAndy at 04:28 5 comments:

Just dropped my box of Romano-British cavalry models onto the road...it had no lid on it!!!

28 beautifully painted cavalry models in major disrepair... Spears and shields broken, paint chipped everywhere... Horses legs snapped off bases so may have to be chucked...

I am devastated...5 years of painting on and off, just shot to hell. Goodness knows when or indeed if I'll be able to get them repaired...

To quote Captain Darling from Blackadder...

"I put in note in my diary this morning Blackadder...It simply said 'Bugger'..."