The usual round of poetry after the battles:

“Shield brother fought brother for the bridge.
Rushing to gain first glory
Geoguth stand atop it.
Throw spears to keep the foe back.
The horse of the Romans rush forward across the ford
Their regret is great as they flee straight back
Jeered by our own brave Britons who chase them back.
The river runs with blood as warriors wade in
Hacking with axe and sword.
One brave Decurion holds, fights on
Horseman against horseman – to kill the enemy General.
Saxons flee – ashamed to fight, their leader will not stand.
Rash Geoguth fall back – too rash to hold
To be replaced by measured fighting men.
The bridge is held, the ford cleared
The river runs bloody.
Roman Christmen, sword brothers did not shame us.
But our Saxon brothers shame we Anglians.”(Carl Fisher, whose Angles, allied with Romano-British fought off a Romano-British/Saxon alliance on the River Glein)

The Annals of Connacht :

The enemy camp was looted and their warriors lay strewn across the hillside. It was a hard fight but Conn'Ann had caught them off guard in the mists of early morn. Many were the heroes made that that day and many were laid low. The enemy had trusted his Welsh allies to his cost - when things started to go awry they had turned and vanished into the mist like the cowardly curs they were. The enemy hearth troop were cut down as they stood and Niall the bard will sing long after of their bravery - we salute a gallant foe. The Saxon warlord fled across the hillside but was hunted down and dispatched as he ran. Of all our host who fought so well that day there is one who shall be sung about in our halls above the rest - Black Fang - Conn'Ann's favourite warhound. Many times did the enemy try to slay him but such was his skill and ferocity that none could touch him. He will sleep at his master’s feet and have his fame known throughout Eire.(Grahame Middleton, whose Scots/Irish, allied with Saxons, achieved a mighty, but bloody victory in the Dawn Attack against a Saxon/Welsh alliance. The hound, Black Fang, survived being in combat with about 10 Welsh combrogi, who resloutely managed to not hit or wound him at all!!!!!!)


Of The Fight At Durobrivae

Tidings have come from the Civitas of Durobrivae,
Where Picti and Cymbri of Gwynedd did stand in mighty alliance,
Of killing by heroes in great ferocity of strife.
Where Einar, king of Mercians, did fall in mighty tumult of war,
Roman allies availed him not.
Now ravens glut on his warriors’ bones.

Uthr, Blackheart of Gwynedd,
Arrayed in gleaming iron in the front rank,
Wearing the brooch of his people,
Threw back armed uprising of Roman and Saxon.
The Heathen are departed,
Driven back toward the briny sea
Before the great champions of the Cymri.

A man called Ceredig, a noble youth,
Fearless in the fight at the village,
Cut down in his glory by Saxon Lord.
Cymri warriors cry ‘vengeance.’
Though lacking bright mail-coats,
Death-dealing with blade and spear
And hatred most strong, they drive the Barbarians to flee.
Now black-beaked ravens glut on Saxon bones.

Artorius Castus, Roman Lord
Lines arrayed in gleaming iron
On high ground shieldwall forming.
They dare not come to the fight.
Like women, craven curs, they stand at bay
Arrow storm no match for Cymri spear-song.
Now the bards sing of their misery.

Hail to Uthr the Victorious,
Mighty Lord of Cymri,
Protector of land and cattle,
His name is known across the land,
His praises sing through the mountains.
(Andy Hawes, after the Welsh/Pict alliance carried the day in Land Grab - the original name of the scenario that won the ‘best scenario’ competition on the WHW website recently)

The 'Land Grab' scenario worked really well again. The Romano-Brits took the high ground on the right flank opposite the watchtower, while the saxons took the left opposite the village. The Welsh/Pict alliance mixed and matched its units, deploying the combrogi with 'hatred' in skirmish formation to rush the village in turn one. The Pict noble and Welsh Teulu formed a solid battle line in the open ground centre, flanked by Pictish warriors. The remaining combrogi deployed in skirmish formation on the extreme left, tasked with destroying the Romano-Brit archers.

The Pict hunters and welsh Pagenses used 'concealment' to deploy next to the watchtower and in the woods to the very right of the Romanoi-Brit deployment.

The battle was decided by three things:
1. The 'hatred' combrogi taking the village and destroying the saxon skirmishers (also with 'hatred' ) who attacked them AND the Geoguth who followed them up! This was helped by Ady (Saxon commander) throwing the worst 'wound' dice I have seen in ages two rounds in succession, allowing skirmishing Welsh to win a combat against the formed Geoguth, chasing them off the table!
2. The solid wall of Pict nobles and Welsh Teulu, who finally tempted the Gedriht to charge. The Gedriht contained a pagan priest, as did the Pict nobles, so Phil (Pict commander) having lost several men, and knowing that he was certain to lose the combat (but with his own priest allowing him to be stubborn) , decided to kill the Saxon priest, so the unit were no longer stubborn, allowing the Welsh teulu flank charge that was looming for the next turn its chance of succeeding. So he targeted the priest with everything in base contact and killed him. Saxons no longer stubborn...Welsh flank charge next turn DEVASTATED the Gedriht, who were chased down and slaughtered. Dead Saxon king, centre won!!
3. The Romano-Brits staying on the hill too long. They did eventually come down, but only at the point where the Gedriht charged, meaning that the Welsh Teulu to their front could ignore them and flank charge the Gedriht. In the final turn, the Romano-Brit Commanipulares could reach the palisade, but hadn't enough movement to cross it and contest the objective.

All in all, a great fun round.
Posted by GuitarheroAndy at 08:48 1 comment:

Not great quality and few close-ups (cos they all came out blurred...bah!!!!!), but a few shots from our round 3 games last night. You'll all be pleased to hear that the Welsh/Pict alliance managed to secure a mighty victory after a hard slog. I think, to be fair, we only managed it because the Romano-British player in the alliance facing us delayed his assault by one or two turns..had he come off the hill a turn or two earlier, the Pict Nobles and Welsh Teulu would not have been able to gang up on the Saxon Gedriht and it would have been a very different story! Anyway, full report (including poetry) to come later. For now, some pics...

First, two views down the tables. There were three multi-player games, each with 2 against 2. We played 'Dawn Attack', 'Land Grab' (my own scenario) and 'River Glein'.. 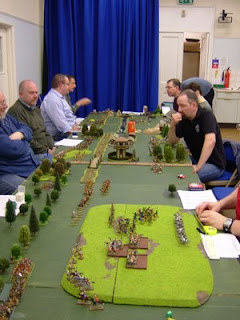 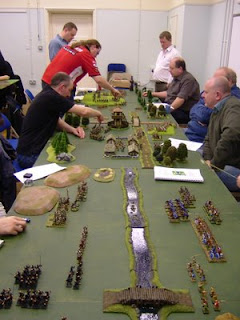 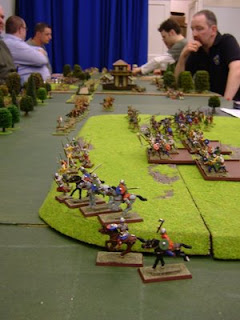 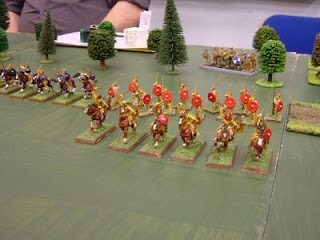 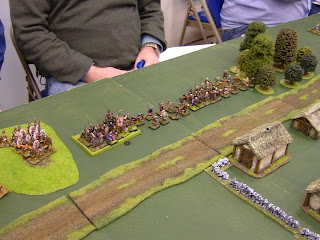 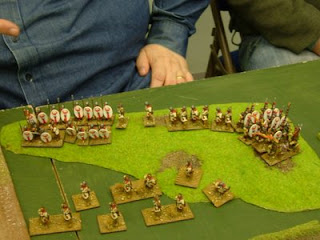 Phil Freer's Picts and my Welsh, facing Ady and Pete on Land Grab... 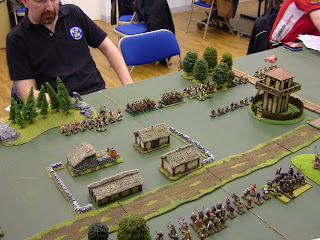 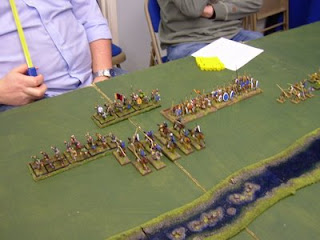 Gavin's allies (Richard Westley's Saxons) lurking in the village on the River Glein... 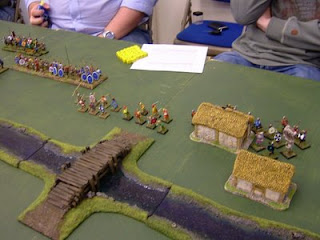 Saxons and Scots/Irish clash in the Dawn Attack... 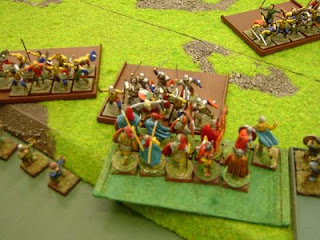 Hope that gives a feel for what was going on...
Cheers
Andy
Posted by GuitarheroAndy at 01:52 No comments:

As it was sunny this afternoon, I took a few pics...trouble was, it was too sunny, so apologies for the pic quality!! It's been a while since I photographed outside and I'd forgotten that 'bright overcast' is a far better bet than 'bright sunshine'....
So, here's what I use for 'Bretwalda'. It's a fairly typical warband. 4 characters , a unit of comitatus, two units of ordinary warriors and a few skirmishers.
I was a bit limited in troop choice, ,cos most of my 'Arfur' figs are at James Morris' house, after he collected them for me from GW HQ the other week (they were there for photographing for WAB 2.0, although whether they'll make the cut...??? Who knows??)
So, anyway, my Welshies for Bretwalda...gathered by the Ford ready for battle! 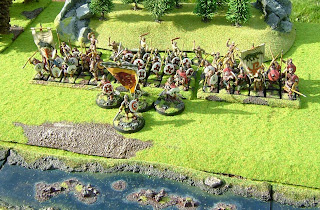 Another view of the whole warband... 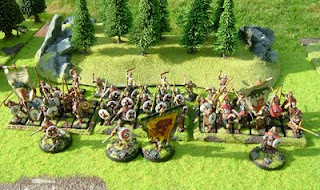 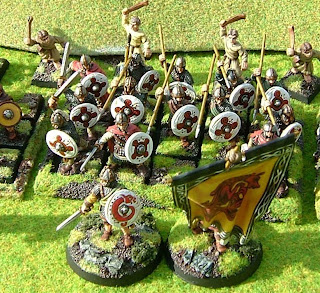 The heroes gather in the front rank of the Teulu.... 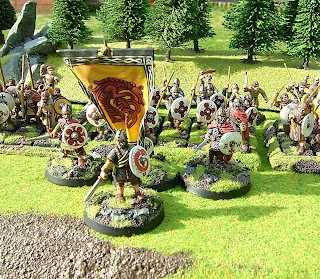 Close-up view of the characters with their repainted shield designs... 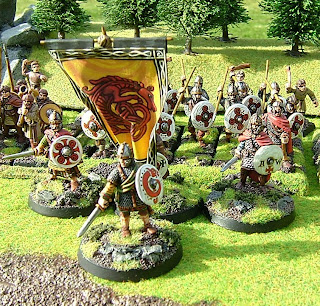 Round 3 of Bretwalda is tomorrow, where I team up with my mate Phil and his evil Picts who kicked my ass last week. We are fighting against a Romano-British/Saxon coalition, although I don't yet know the scenario, as I'm not drawing those til all lists are in..am still waiting for two, despite requesting them in last week...
For anyone thinking of running a similar campaign, here's a warning. Don't expect people to actually email lists in ahead of games, cos they won't....well, some will...probably most, but there will always be some who can't get it together in time... Drives me mad and utterly buggers up the organisation of everything...
Posted by GuitarheroAndy at 10:36 2 comments: