Apologies for the lengthy gap between posts. Life has thrown a few real curveballs of late and continues to do so. Anyway, I'm bouncing back with a new project that will hopefully come to full fruition for the show circuit next year... Western movie war-games....

When I was a boy, I was fascinated by the old Hollywood US Cavalry vs Indians  westerns. I absolutely loved them, and I still do. Ok, the plotlines are often terribly thin and the treatment of the Native Americans in many of them is less than great, but there’s still something about them that keeps me watching.

Ever since I began wargaming, I’ve wanted to do something ‘Hollywood’ like that but have never found quite the right models. You see, for me, the Cavalry have to have yellow neckerchiefs, braces, gauntlets, carry sabres, etc, and no 28mm range has that. What DOES have that, though, is the old 1970s Airfix soft plastic 54mm range! I had a set as a kid and recently found a load on EBAY in various stages of disrepair. A quick interweb search also found me Paragon miniatures, whose Cavalry are ok, but have small heads, but who do produce some rather lovely Apaches, and that was it… We’re on our way.

So, here’s the first batch of Cavalry. The models I bought came in various states of repair. Some were ‘as new’, but others were smothered in enamel paint. They were popped in a plastic sealable freezer bag along with the contents of a tin of Mr Muscle oven cleaner and were left there to fester overnight. They were then brushed clean in warm water, which cleaned 99% of the gloop off very well. Next, I washed them in warm soapy water to remove any remaining oven cleaner (nasty stuff!) and oily mould residue, which can stubbornly remain even after 40 years, according to some folks in the know. Once dry, they were given a good coating of Testors Dullcote which provides an anchor for the paint. I then brushed on a thin white undercoat.

I’m very pleased with them!

Captain Kirby Yorke (played by the master, Mr John Wayne, in Fort Apache and Rio Grande – although in the latter, he’d been promoted) with sergeant Travis Tyree (played by Ben Johnson in She Wore A Yellow Ribbon – he’d also been in Rio Grande but as a lowly trooper so must have been promoted before re-deployment to the plains!) Tyree is a conversion, as seen in the accompanying pic. His left arm comes from the obligatory (and often useless) prone pose that Airfix always loved so much. Capt. Yorke’s shoulder rank bars are Greenstuff. 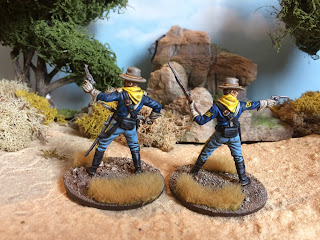 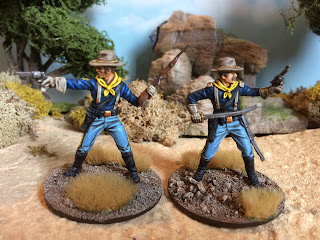 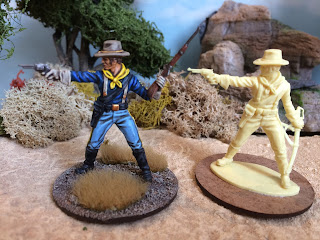 Bugler and trooper standing firing. The bugler has the left arm from the mounted standard bearer/bugler model. 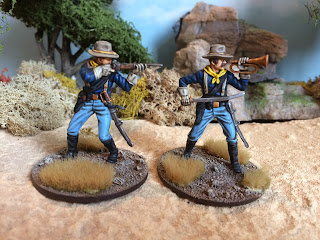 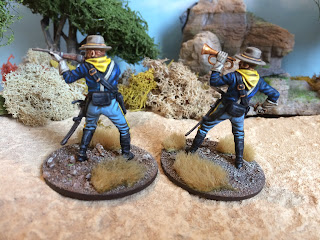 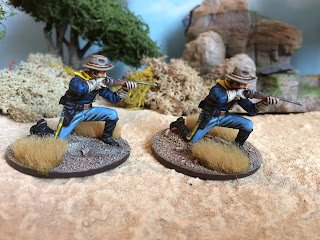 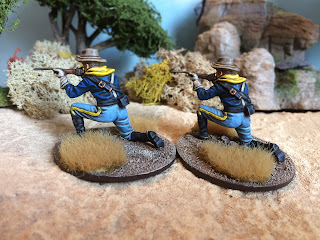 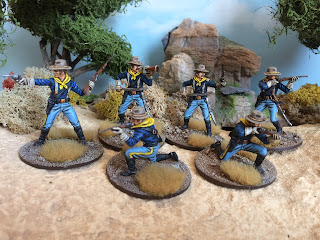 Am angling to use a modification of Osprey’s The Men Who Would Be Kings, as it’s suitably ‘Hollywood’ in scope and a chap on the Facebook fan group has done some work on something similar, which he has shared.

There’ll be more to come on this project over the next few months, with more dismounted chaps, horseholders and some mounted versions next on the agenda, as I haven’t purchased any Apaches yet.
Posted by GuitarheroAndy at 10:18 3 comments:

Labels: Cavalry and Indians, Painting, The Men Who Would Be Kings
Newer Posts Older Posts Home
Subscribe to: Posts (Atom)