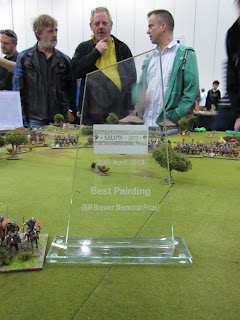 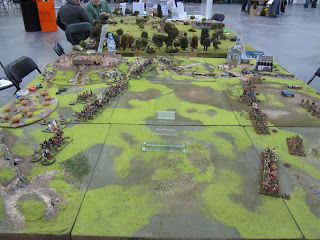 Well, this was a result both unexpected and very gratefully received!! You know that you have achieved your 'wargame show aims' when you find yourself pretty much welded to your game for the day answering myriad questions, demonstrating bits of the rules, chatting to punters, etc, AND you end up winning a prestigious trophy, which, as the pics above demonstrate, was 'Best Painting.' At ANY show that'd be a result... At Salute, it's doubly special as there are SO many great miniatures on display.

So, overall, I think 'the team' (myself, Steve Jones, James Morris, Scrivs, Andy MacT, Tom and John) did ourselves proud and did a darn fine job of promoting Osprey's Dux Bellorum rules on the day.

It was a long day, as I was up at 4.20am to leave the house at 5.30am and got home at 8.15 in the evening, but it was really worth it in every sense. So may people came to see our game and left with positive comments. Lots of them told us that they owned the game, but hadn't played it and I like to think that a good number of them will now be inspired to go and try it having seen us play it through. We tried to ensure that we had one of our two games running at all points throughout the day. This worked well, as there was a little overlap and it enabled lots of the team to be on hand to explain stuff to the punters. We always try very hard to get that aspect right at a wargame show - while some punters don't really want to stand and chat, a good number do, so taking the time to say 'hello' and strike up a conversation is always worth the effort and having a big team certainly made that possible.

On the day, Arthur lost twice to the Saxons. In the first game, Scrivs beat me and in the second, Scrivs started out with the Saxons against Andy MacT who took the Romano-Brits, but Scrivs then toddled off to see the Chain of Command demo on TooFatLardies stand, so I took over and killed every Briton on the table...including Arthur!!! Over on the big game, they played it through once, but I'm not sure what the result was.

Both tables looked spectacular due to the quality of figures and especially the terrain - Steve's scratch-built hill fort and the charming 'church that is now a water mill' providing plenty of eye candy for the punters and prompting several questions.

I didn't get to see much of the rest of the show, as it's so big and I was only away from the game about 90 mins, so, while I had a wander and did a bit of shopping (new Musketeer Arthurian characters and cataphracts, some paint and Foundry's new Fantasy rulebook) there was too much to take in. There was a stunning 40mm Alamo game put on by Gringo minis which just look AMAZING - thousands upon thousands of pounds worth of minis and terrain, apparently - and a HUGE Waterloo game, which caught my eye simply because of the size of it and the mass of figures on the table - too many figures crammed into the space, if I'm honest, but then that always seems to happen when folk attempt a Waterloo refight. Still, that sheer number of models always causes a 'wow' moment.

The show seemed busy and it was GREAT to catch up with some gamers who I hadn't seen in a while, as well as to meet some of the bloggers who follow my ramblings on here...

Anyway, enough chit-chat, you wanna see some pics, right? Here are a few I took of our games. Apologies for poor photography on a few. I was experimenting with camera settings as, for some reason, I had more trouble than usual with settings and getting depth of field, focus and lighting right... 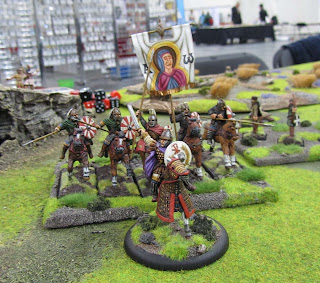 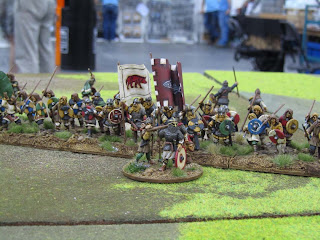 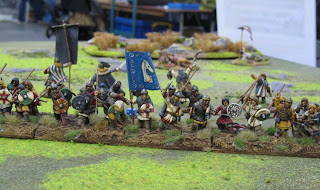 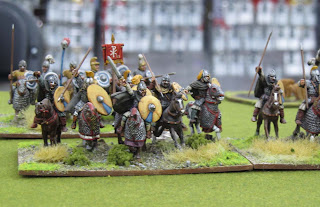 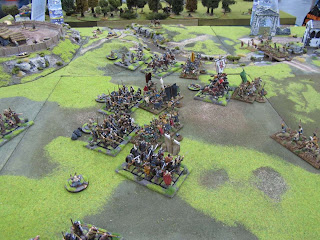 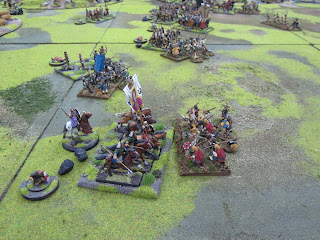 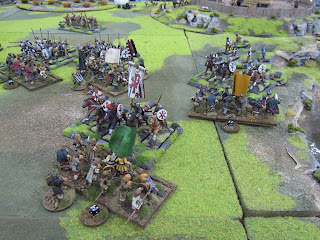 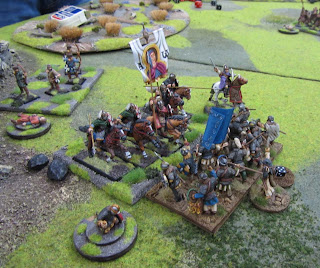 Last minute preparations for Salute are now done! I realised on Monday evening while packing my army to take to the club to play Andy MacTaggart at Dux Bellorum that I had forgotten to paint the extra casualty marker that I needed!! Doh!! Also, 25 of my Romano-Brit models had paint chipped off in varying degrees, so I needed to patch those up. Anyway, that's now done and I am all sorted and ready for Saturday! It's gonna be a long day, but no doubt a good one and the game I'm about to tell you about was excellent in that it helped Andy and I to realise some key errors we had been making in our games thus far - errors we will not make on Saturday!

We opted for the 'End of Reign' scenario from the book. basically, you have to rout the enemy Companions unit to win the game - any other result is a draw. Also, this game's special rules are that you cannot allocate leadership points to save wounds on your companions... Interesting!!

We set up as follows: Andy split his force so that the bulk of his foot was on his left flank and a small flanking force was deployed way to his right. I countered by placing my cavalry on my left to hopefully exploit the gap and to keep his flankers busy.

In the event, it didn't quite work out. My heavy cavalry did fearful slaughter to Andy's infantry, but not enough to rout them before his flankers, having reduced my light cavalry to 1 cohesion, appeared in my cavalry's rear. My shieldwalls battled valiantly on my right, but by the end of the game, I was down to less than 50% of my starting force and, had we not called it a day, would have been in danger of losing my companions. I did manage to attack Andy's companions in the rear and reduce them to 1 cohesion, so it was close!! A draw it was, but I'm calling it a 'winning draw' to Andy.

However, we made a number of errors. Chief among these was that we got the part about avoiding uncontrolled charges totally wrong, so Andy basically avoided my shieldwalls for far longer than he should have and also did some illegal moves with those units as a result.

Also, my rear charge onto his companions was illegal too! Although one can be behind the enemy and still charge them even with no line of sight, the unit has to surrender one base-width move to turn and make the charge. This is what I didn't do!!!

Still, even with the errors, it was a brilliant game! The more I play it, the more I enjoy it. In particular, I like the allocation of leadership points, which becomes almost like a poker game as one tries to out-think one's opponent!!

So, off to Salute with this army on Saturday. I hope to see some of you there. Pics of the battle from Monday night below.... 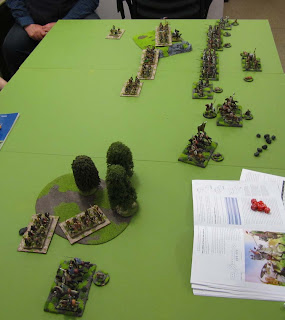 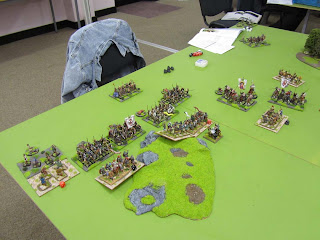 Posted by GuitarheroAndy at 12:46 2 comments:

Greetings one and all. Apologies for lack of updates over the past 2 weeks. I had planned to post some pics of painted models, as I had several awaiting completion and had planned to do those over the holiday period. Sadly, a flu virus intervened and utterly wiped me out for 10 days!!! Truly, 'twas a mighty and most virulent virus, made worse by the fact that we were on a family holiday at the time...Great!!!! :-(

Hopefully, I am now on the road to full recovery and I hope to resume some painting and gaming next week. Next posts are likely to be the final practice game of Dux Bellorum before Salute (gaming that one on Monday evening) and I do hope to eventually post some pics of some Colonial Sikhs, a Saxon standard bearer and a new bunch of Elves...plus of course the next Dux Brit battle, where I attempt to salvage an iota of pride and throw Mike's Saxons back from the walls of Linnius...That last one is coming after Salute.

Talking of Salute, if any of my esteemed readers are frequenting the show this year, please look out for the Newark Irregulars banner, as that'll be where you'll find me demoing Osprey's Dux Bellorum rules. Please do come over and say 'hello'!!
Posted by GuitarheroAndy at 09:52 4 comments: