The Perils of The Interweb...

I am not a member of TMP but I occasionally drop by and peruse. Today I was perusing the Wild West board there and noticed with interest that my Airfix 54mm 7th Cavalry posted here earlier in the year had appeared on TMP, posted by someone called Tango01. To be fair, he did post a link to my blog after the pictures but nothing else to actually indicate that they are mine. He even responded to the nice comments they received with 'Glad you like them!' A little naughty really...

I believe I'm not the first person he's done this to...

Oh well, I suppose that's the internet for you...

However, Tango01, if you're reading this (and clearly you must visit occasionally), do be a good fellow and write something like 'Found these pretty pics on Andy's blog...' before you post any more of my pics, there's a good chap!!!
Posted by GuitarheroAndy at 12:21 4 comments:

Age of Tyrants: a WAB1.5 Campaign Day using Age of Arthur in Peterborough

So, the day finally dawned and after all the preparatory work, all was ready for the first WAB1.5 day in Peterborough since…well, since the last one aeons ago!

In true WAB day fashion, I’d decided that things would be anything but ‘ordinary’ for the day. I’d decided on two factions simply because it’s easier should you get last-minute drop-outs, although as it turned out, I had 16 players which was bang on for 4 factions. Oh well…

I decided on a typical ‘Ambrosius vs Vortigern’ classic mash-up, and this was made easier by the spread of armies as we had enough Romano-British to divide between the two and we then had enough Saxons and Irish to complete Vortigern’s faction and enough British and Welsh to complete the faction of Ambrosius. You’d have thought we’d planned it!

I also designed 9 ‘Treasures of Britain’ artefacts which would be randomly allocated to tables. I did this so that even I would have no idea who had claimed what until the great ‘end of round reveal’. Each item allowed the player a small bonus in their next game. We like to keep it fresh! We also had a range of scenarios; some pitched battles ‘with a twist’ (just to keep players thinking) and others that were very defined with clear objectives. As it turned out, I think we got this right, as people seemed to enjoy them. Some were tweaked from the Age of Arthur book  and others were re-purposed from previous events in Peterborough.

On the day, Tom Webster-Deakin took the role of Ambrosius and Kim Daniels took on the role of Vortigern (after a full and fair election, in which neither were involved, involving a hat and small pieces of paper!) They were to discuss the scenarios with their faction members and to work together to allocate armies best suited to scenarios but trying to avoid anyone doing the same game twice. This didn’t quite work and there was a bit of ‘scenario swapping’ involved once players got to tables, but we’re all friends here so it was all fine in the end!

I was a member of Ambrosius’ faction with my British Kingdoms army. I had gone for a bit of ‘classic Arthur’ with a kick-ass unit of mounted Teulu, character advantaged up with finest armour, finest horses and mounted raider courtesy of the Rex (general) and Tiern (ASB) combo. They were supported by 2 Uchelwyrs, one leading a unit of 31 combrogi on foot and the other a unit of 23. I also had 10 mtd combrogi and 4 units of skirmishers. This was a bit of an experiment as I normally play Romano-British. I suspected it would either go very well or very badly. In the event, I was proven wrong…

So to game 1. ‘Ransom’. This was basically a ‘pitched battle with a twist’ nicked from the El Cid book! The aim was to destroy the enemy army while capturing their heroes for ransom. I was up against Steve with a mighty Irish horde, supported by Welsh allies (boo…hiss…traitors!)  This was an excellent game! Steve gifted me his left flank by keeping his cavalry formed and allowing my Teulu to charge and destroy them, with the Irish hero being killed by Arthur. On my left, the dogs saw off my skirmishers, but a failed warband test drew the traitor Welsh into some woods and away from my flanks. In my centre, my combrogi drove off one Ceithern unit, capturing the Irish hero in a challenge (yes, my Uchelwyr won a challenge against an Irish hero!) The Irish Fianna demolished my large combrogi unit killing the hapless Uchelwyr in the challenge – no ransom there then! This caused my other combrogi to panic! Then the Irish slingers using double shot wiped out my mtd combrogi. However, by now, the Teulu were set up to sweep down the Irish line. They then proceeded to destroy unit after unit with amazingly accurate combat dice, twice causing the general’s Fianna to flee and rally. By game end, my Teulu had performed gloriously enough to allow me a good close-run victory by 300pts.

In game 2 I was up against fellow club-mate Dan who was using my Romano-British models, so the whole table was populated by my models! This was a scenario involving a dawn attack breakout from a British kingdom city to recapture a nobleman held in a tent in the enemy camp. The scenario rules for the dawn attack were to be my undoing, as the darkness kept almost all my troops from moving (terrible leadership dice). This set me on the back foot and Dan played it very well, denying me the hostage, slaughtering my infantry and keeping my Teulu pinned out of the game. In hindsight, I should have been more aggressive with the cavalry, using my Teulu’s mounted raider ability, but Dan’s use of shieldwall and clever cavalry tactics meant I lost out by under 200pts, so a close defeat.

In game 3 I was up against Kim (Vortigern himself) in a slightly repackaged version of Cat Coit Celidon from the Arthur book. We’d tweaked victory conditions to allow for victory points rather than just getting troops off. This meant that Kim simply ignored getting troops off and tried to beat my army by forcing me to attack his shieldwall. It nearly worked, as I forgot the easy to forget rule that allows cavalry who lose a combat but fail their break test to fall back in good order. My Teulu ended up charging a pedyt shieldwall on the enemy left flank but poor combat dice over several rounds (plus uncommonly good ones from Kim) meant that all bar the heroes were dead by the time the pedyt finally broke in the last turn. I did break a milites shieldwall owing to them only fighting in 2 ranks and having toughness 2 due to fatigue, but Vortigern’s leadership was strong. In retrospect, the scenario victory conditions were wrong as it was too easy to ignore the main aim. However, Kim played it very well. He forted up in a strong position and made me come to get him. I tried, but couldn’t break him. In reality, this would have been an inconclusive battle leading to the destruction of the Romano-Britons as they tried to march out of trouble in the winter snows, but in campaign day terms, it was an enjoyable bloody stand-off.

So, 1 win, one lose and 1 draw. That’ll do!!! All 3 games were challenging and fun. My opponents were true gentlemen and I had a blast. In the event, the rest of the Ambrosian faction all did way better than me, destroying Vortigern’s hold on Britannia. My only regret is that I got so few photos, as I was so busy playing (with enjoying the games really...simply forgot to get the phone out!), dealing with queries and sorting results. Here are a few snaps of other folk playing their games...


All in all, a fabulous day of gaming. It was further enhanced by Footsore Miniatures who sponsored the event for us by providing free models for all attendees and some fabulous prizes too! Not only do they do some of the best miniatures for the period but they are lovely people too. I urge you to spend much money buying their stuff!!!

You can also read about the shenanigans at Tom's blog: http://tomstoysoldiers.blogspot.co.uk
And maybe also at Steve's: https://stevossoldiers.wordpress.com

....THERE WAS CAKE!!! A mighty 'dark ages chocolate cake' by the talented Mrs Whitaker. Tell me this isn't the coolest cake you've ever seen, I dare ya!!!! 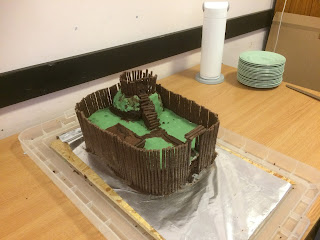 Posted by GuitarheroAndy at 06:19 2 comments:

Andy Does Game of Thrones

It had to happen eventually. Despite only having read 1.75 of the books and seen only series one of the TV show, I'm doing Game of Thrones! I blame Rob at our club, as he's done a Lion/Dragon Rampant variant called Direwolf Rampant and is running a campaign. Needless to say, I was in!!

So, which faction? Well, I was gonna go Stannis Baratheon because the gold background and red flaming heart/black stag motif is immensely cool. However, I didn't fancy painting that onto loads of shields and horse furniture, so went for The Knights of the Vale instead, as I knew I could use some decals from Veni Vidi Vici to do that.

Now, which models? Having been amazed, inspired and terrified by some of the excellent mash-ups of Perry, Fireforge and Gripping Beast plastics on Lead Adventure, I decided to do something different. I always liked the look of the knights inn the 80s movie 'Excalibur' so that was where I was going. I bought a load of 5th Edition WFB Bretonnians off Rob, but they looked too 'French 100 years war' so I kept the horses and scoured EBAY. Luckily, I found a chap selling some Empire plastic knights that he had customised with Chaos helmet heads (minus all the horns, etc) and they looked fab, were cheap and could easily be repainted. Kerching! Purchased.

So, with the addition of High Elf helmet plumes and Gripping beast shields, plus hand-painted paper banner and lance pennons, here are the first of those Empire/Chaos riders on the Bretonnian steeds. This is the leader unit for a small force taken from the garrison of the Gates of the Moon, which is held by the Royce family. So these knights have Ser Nestor Royce's gold and purple colours mixed in with the blue and white of House Arryn of the Vale. I'm really pleased with these as they contain two of my least favourite things to paint: Tons of flat cloth and plate armour! Luckily, my usual 'base coat, dip, Dullcote, multiple highlights' approach worked like a charm!!

More knights to come plus some old GW models for the infantry... 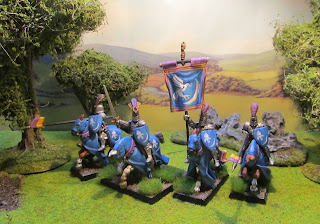 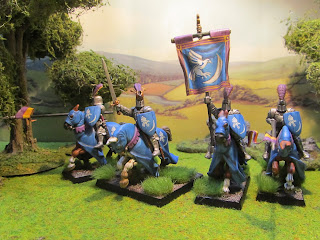 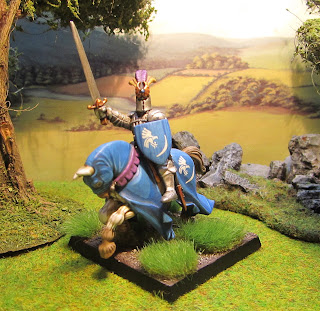 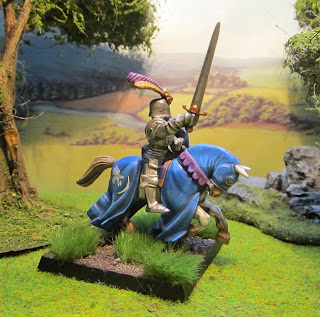 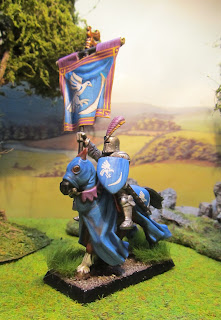 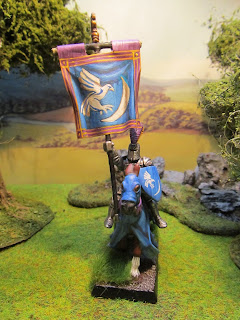 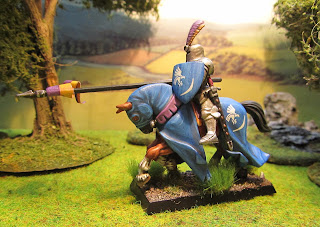 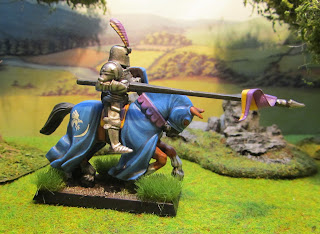 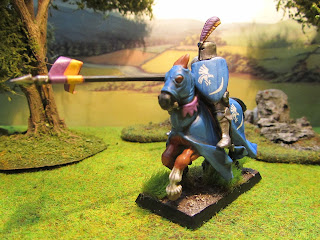 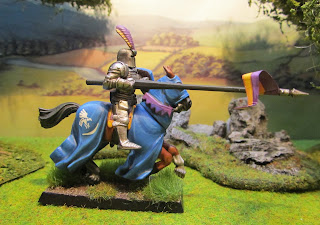 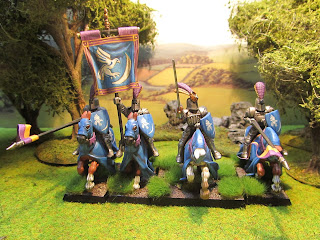 Posted by GuitarheroAndy at 03:54 2 comments: