I am extremely fortunate to have been asked to help play test the upcoming Colonial 'large scale skirmish' rules by Dan Mersey (of Dux Bellorum and Lion Rampant fame). These are intended for publication by Osprey sometime nextI year, so we are in the early stages of play tests and Monday evening was my first foray into the rules.

Dan has asked play testers to be careful what we post online, as things can change so much in the course of play testing, but I have checked with him that it's ok to tell you the following:

The game has similarities to Lion Rampant in its design and in some of the game mechanics. Basically, each unit of troops/warriors has to 'activate' each turn. Some things it can do without any tests, but other, more unusual or complex things need to be tested for. This varies according to whether you are a regular soldier, a tribal warrior, etc.

Dan has made the troop types fairly generic, but with upgrade options to create forces based on historical campaigns, e.g. enabling warriors to be fanatical fighters, allowing upgrades to marksmanship, etc. This is good, as it prevents loads of different troop types to confuse and confound. He has opted for a similar approach to weaponry which is simple but incredibly effective, allowing for games from 1850 to 1900 without needing lengthy weapon tables. This is a feature of rules that Dan writes - he makes the core mechanics simple, but open to maximum player engagement and thus far, this set is working well along those lines.

Units depend on the quality of their leaders and there is a neat mechanism for varying quality of leaders in your forces. This is important, because the worse the leadership of the unit, the harder it is to rally if it is unfortunate enough to be pinned down under fire. Talking of which, shooting and combat are simple and brutal, but seem to work well. We tested this by charging a large tribal unit over open ground at a British firing line with predictable results - the warriors did make it into contact (we made them 'fanatics' so they had good leadership), but were so shot up that they were repulsed in the combat. We felt that this was good, as it means that a native player will have to use terrain in a cunning way to win! As we play NW Frontier/Afghanistan, this is perfect for our Pathans!!!

So to the test game, where we used what I have painted, which is a unit of 12 British infantry accompanied by a unit of 12 Sikhs against 2 units of 12 Pathan riflemen/jezzails and 2 units of 16 Pathan swordsmen. For the main game, we used no upgrades. These forces are effectively half the standard size that one would normally use, so we decided that we would play on a 4 x 4 foot table. We decided that the British would be trying to burn down the lovely Pathan watchtower that Jimbibbly James (Oshiro Model Terrain) made for me a while back, so plonked it in the centre of the table and rolled for leader qualities....REALLY BADLY!!! The British officer was clearly fresh out of Sandhurst and one of the Pathans had a tendency to smoke too much dope, thereby giving him variable leadership. One of the Pathan swordsmen units got a trait that meant they had to charge if they could - good - just what Ghazis should do!! So off we went...

The Anglo Indians advanced on the tower, with the British unit making a beeline for the door while the Sikhs took up a position to shoot the bejeezus out of the advancing Pathans on their (left) flank. The Pathans simply rushed forward to slay the infidels, hoping to do a wee bit of sniping when they came into range.

In the event, the British unit reached the tower but was forced to take refuge inside by hordes of Pathans while the Sikhs were left out in the open trying reasonably successfully to keep the remaining natives at bay (pinning is a real killer when you are a native unit with a dodgy leader!) In the event assaults and shooting gradually reduced the British unit until it became pinned inside the tower, needing to score 11 on 2 D6 to rally! At this point, despite driving off 2 Pathan attacks, the Sikhs, losing men and outnumbered, decided that they would have to leave the British to their fate inside the tower...we called it at that point as a Pathan victory.

The rules still need some tweaking regarding the effects of buildings on shooting and combat, but apart from that the game played out well. The Sikhs held off massed assaults (volley fire is NASTY!) and one dodgy decision (not getting into firing line quickly enough) saw the poorly led British unit take a pasting. All true to historical form, then!

Here's a few pics for you in approximate order of the action taking place. 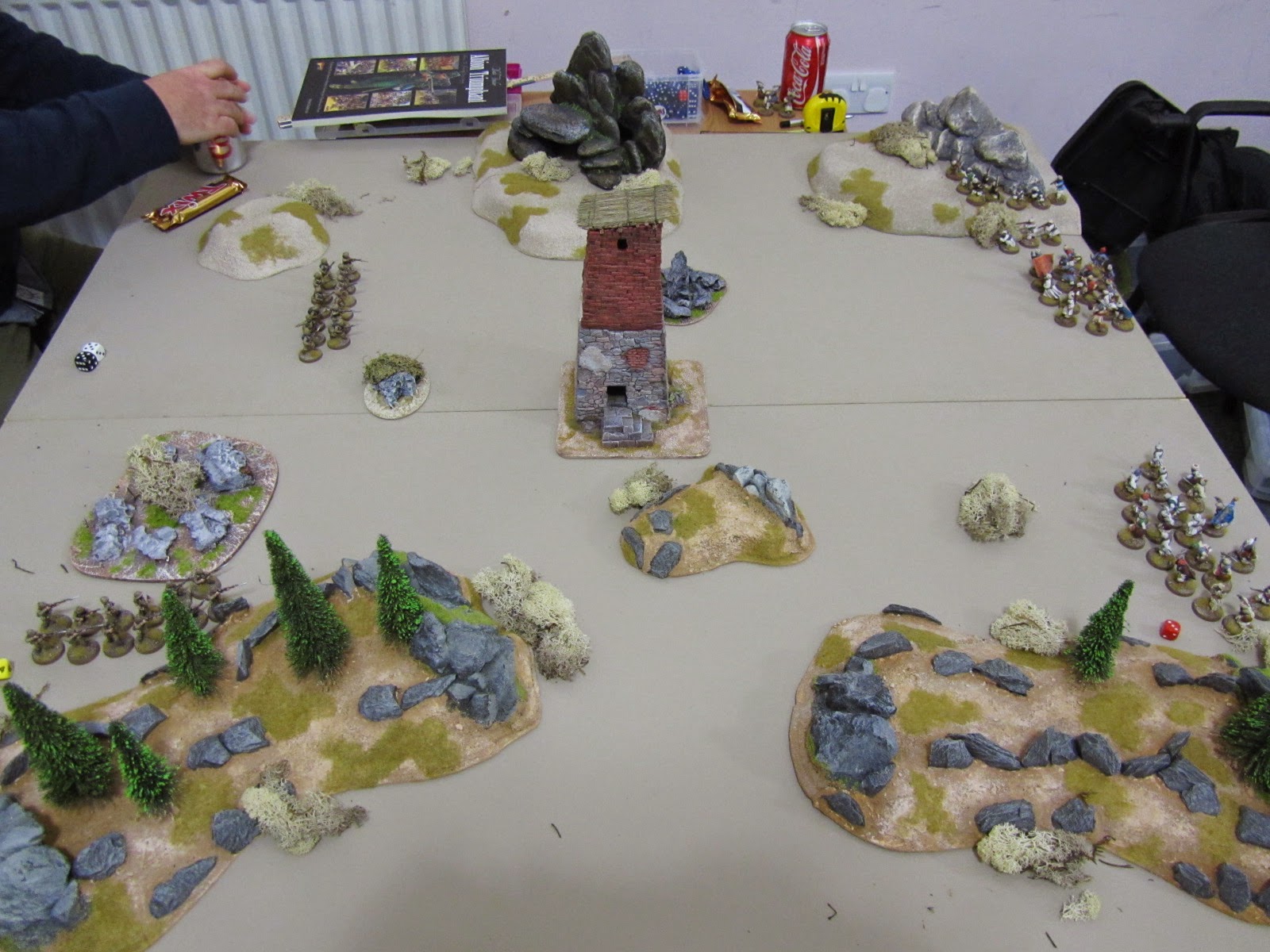 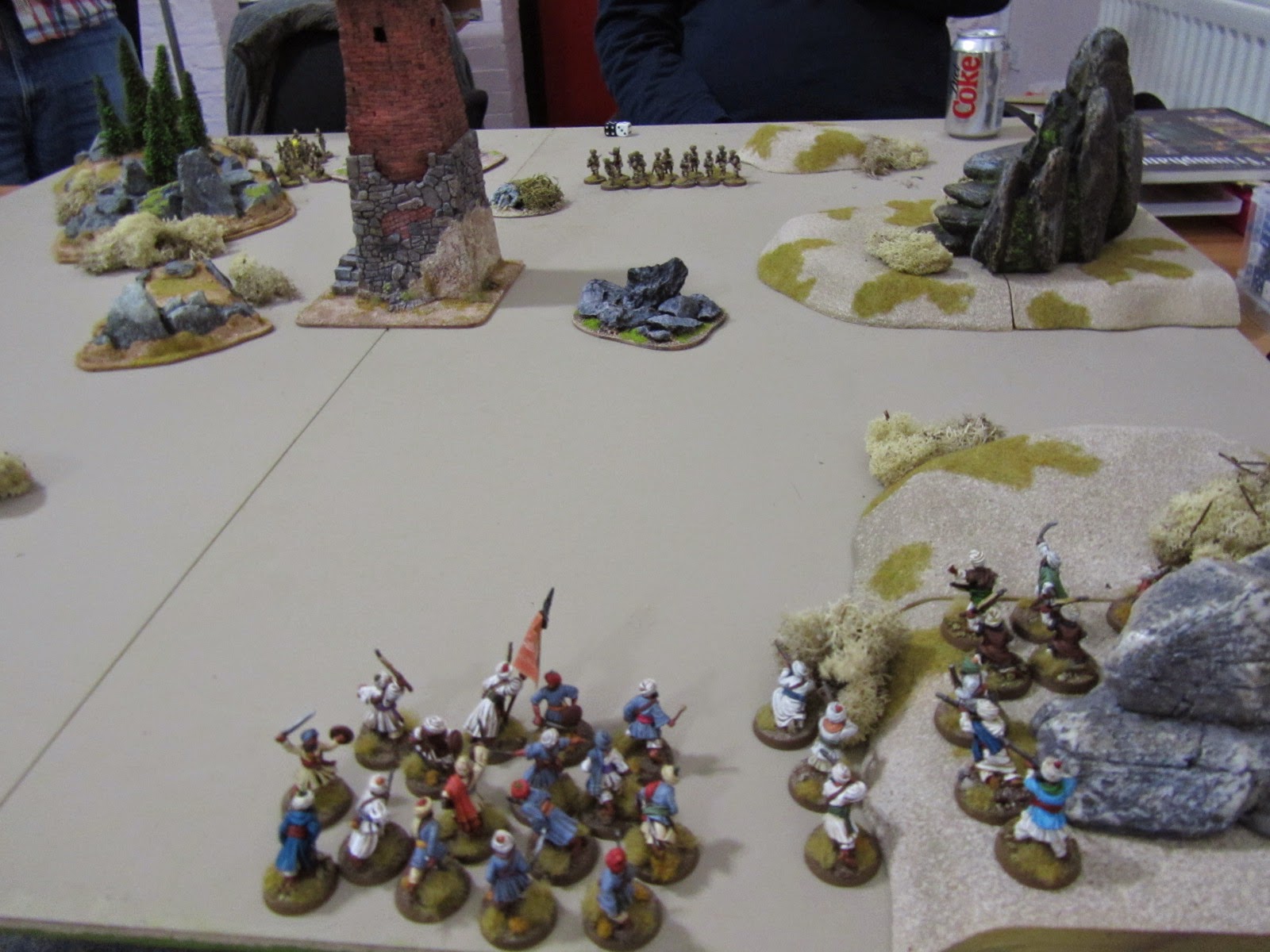 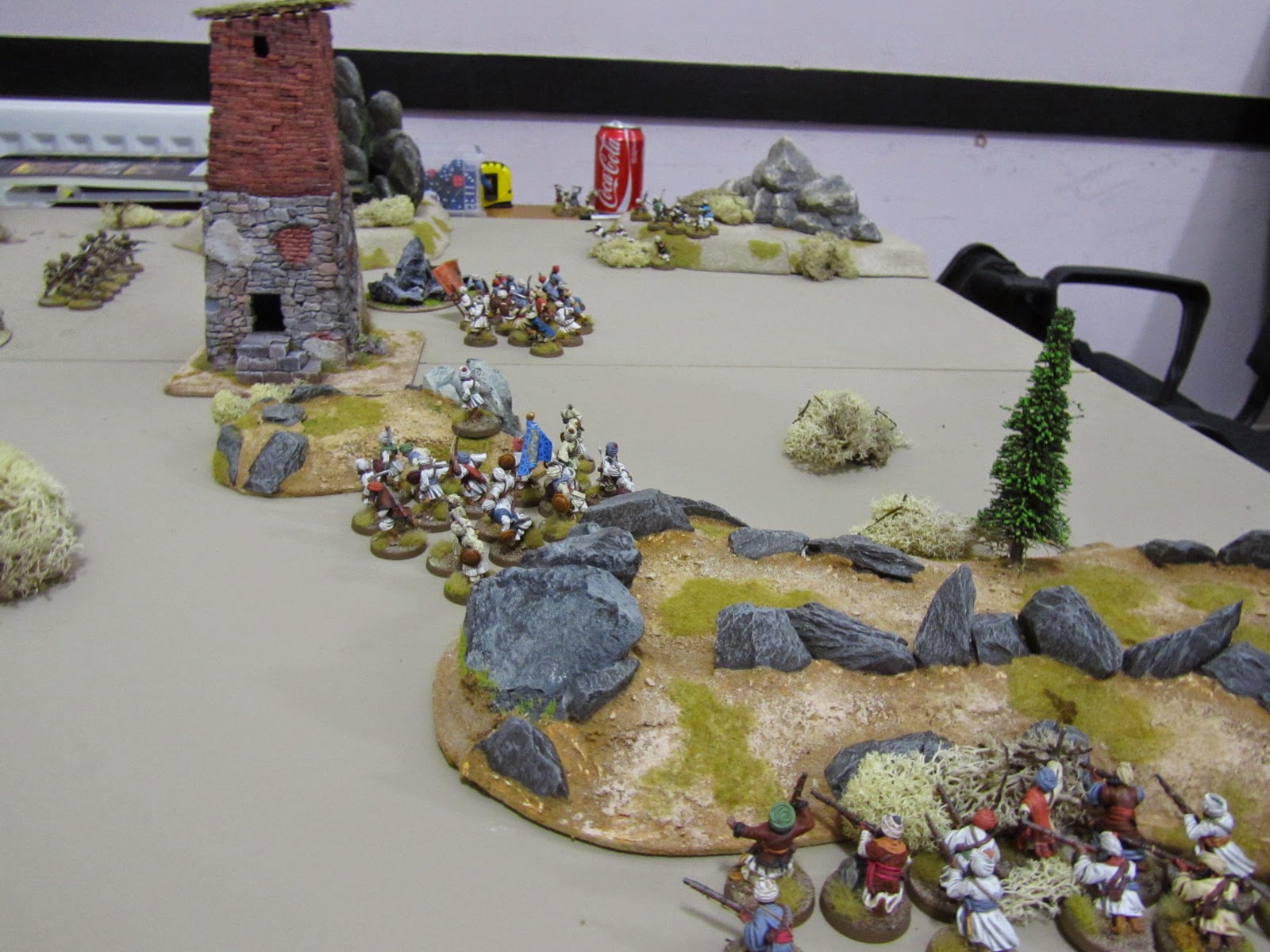 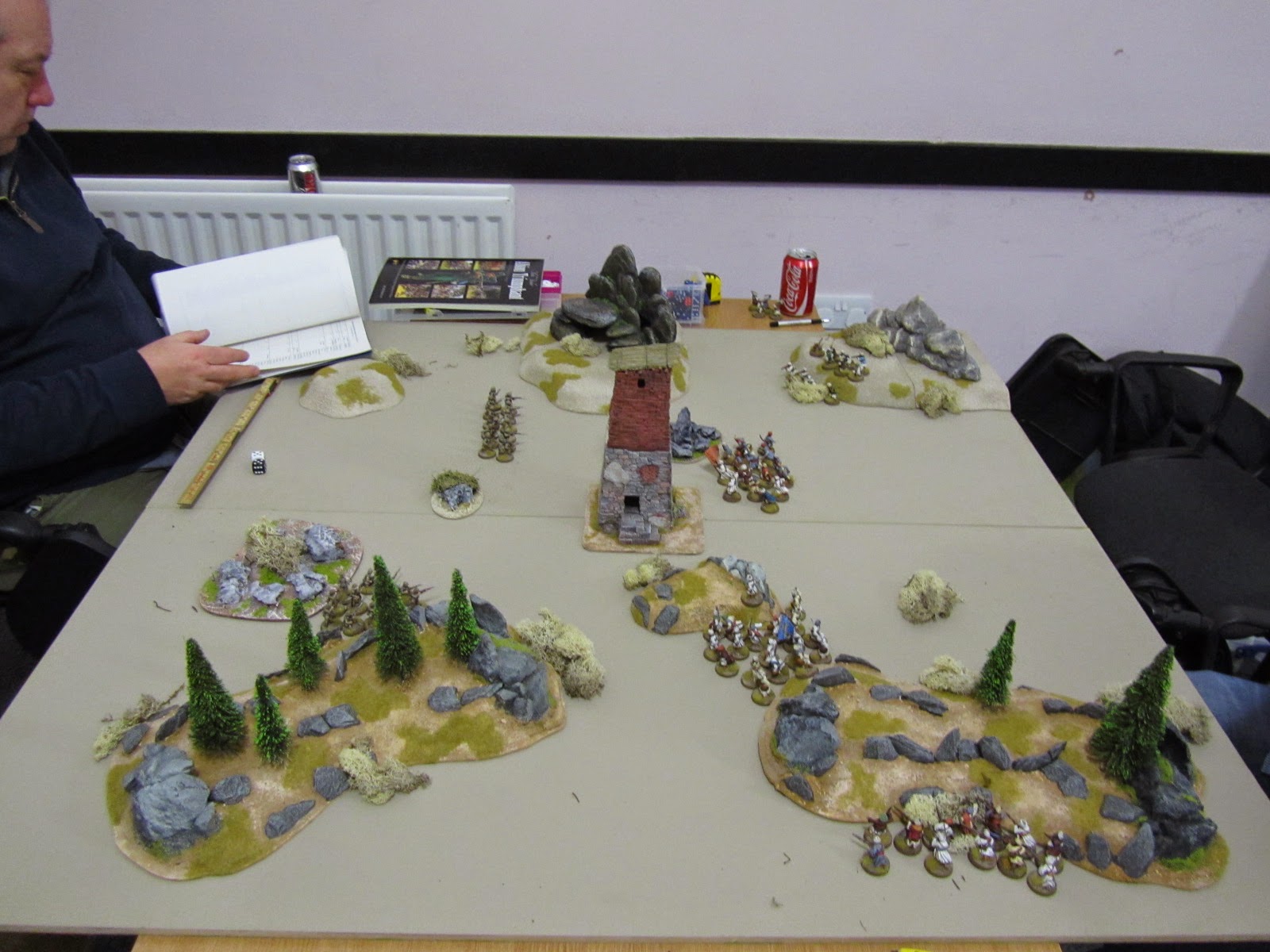 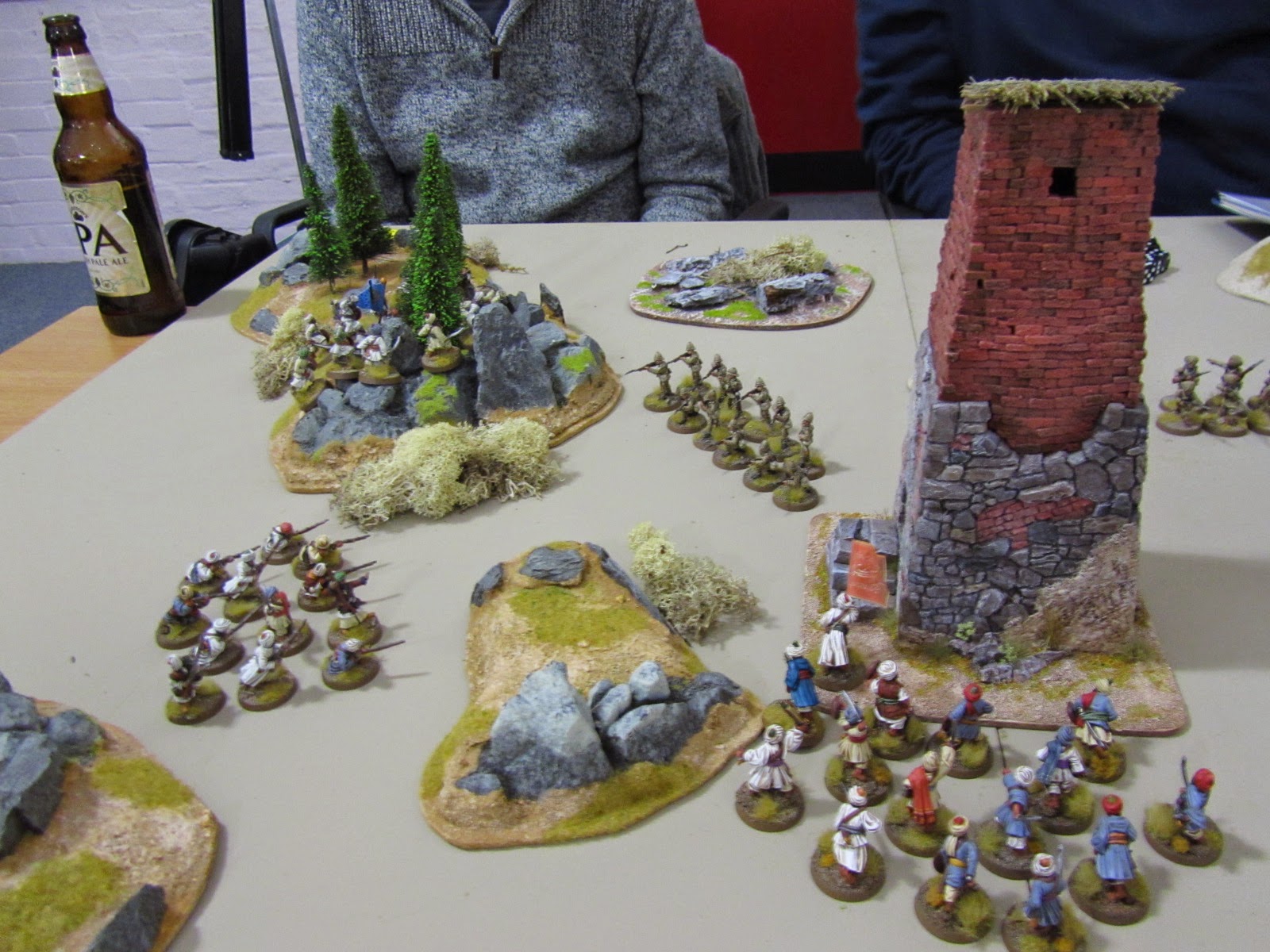 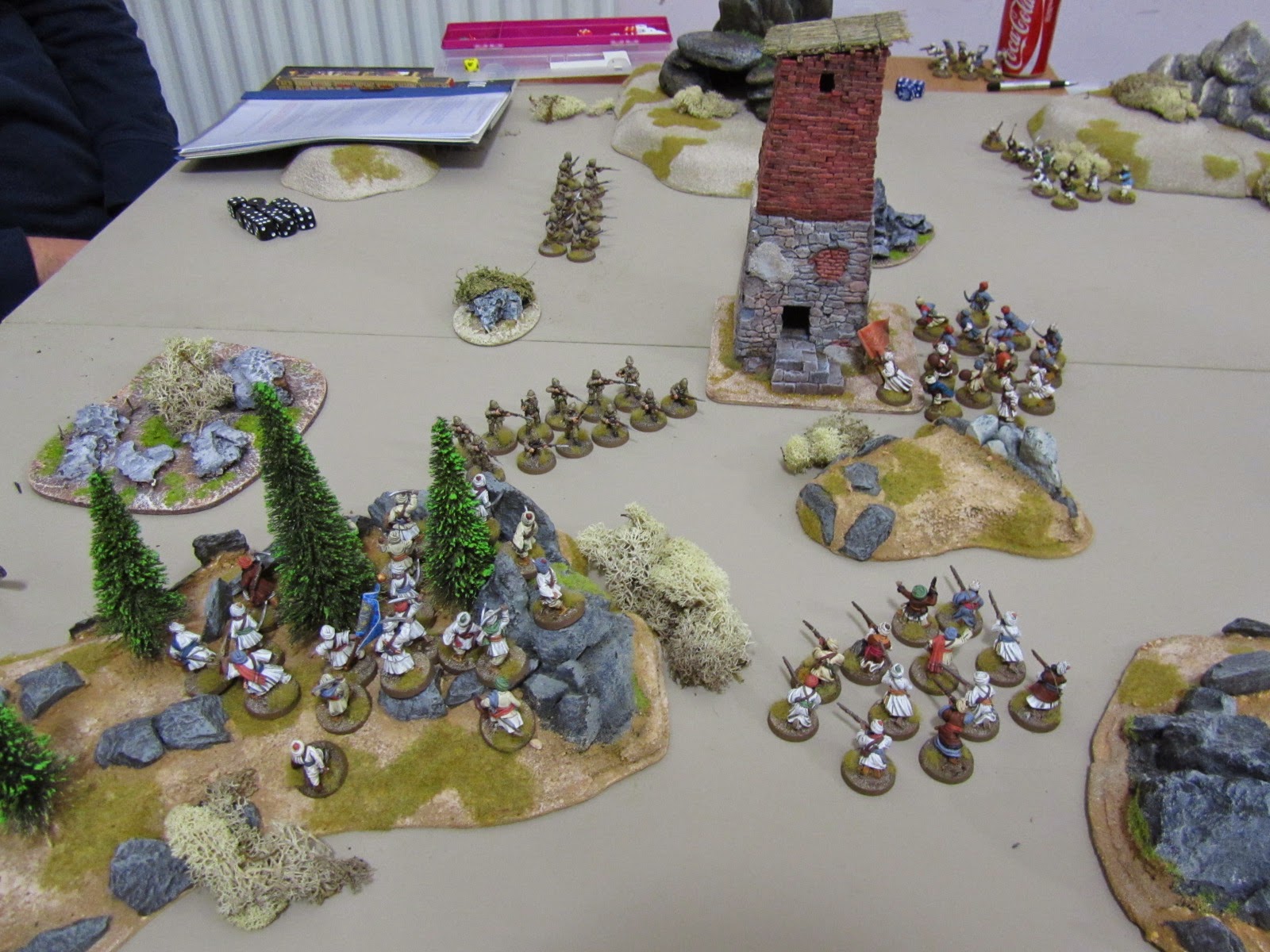 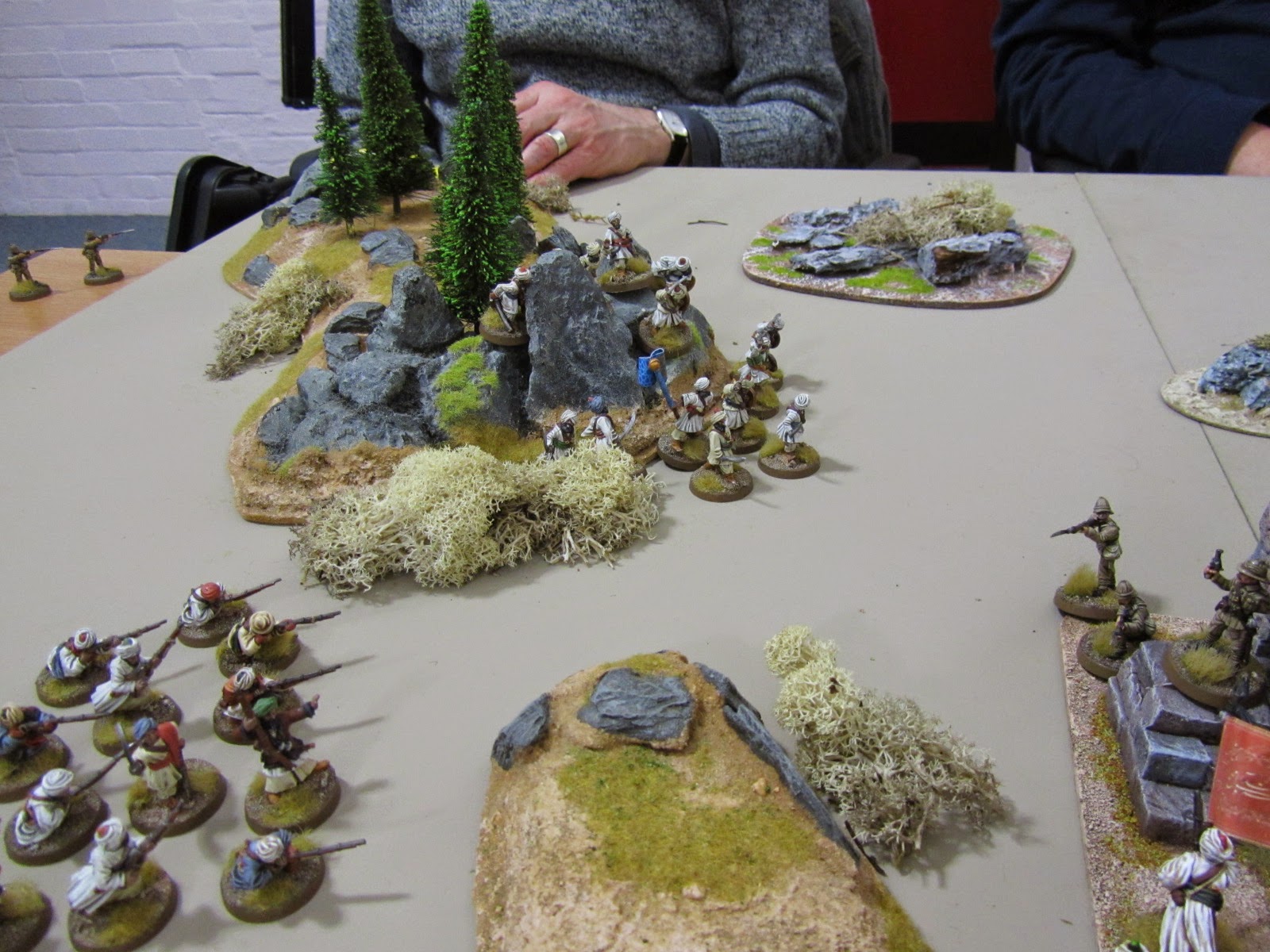 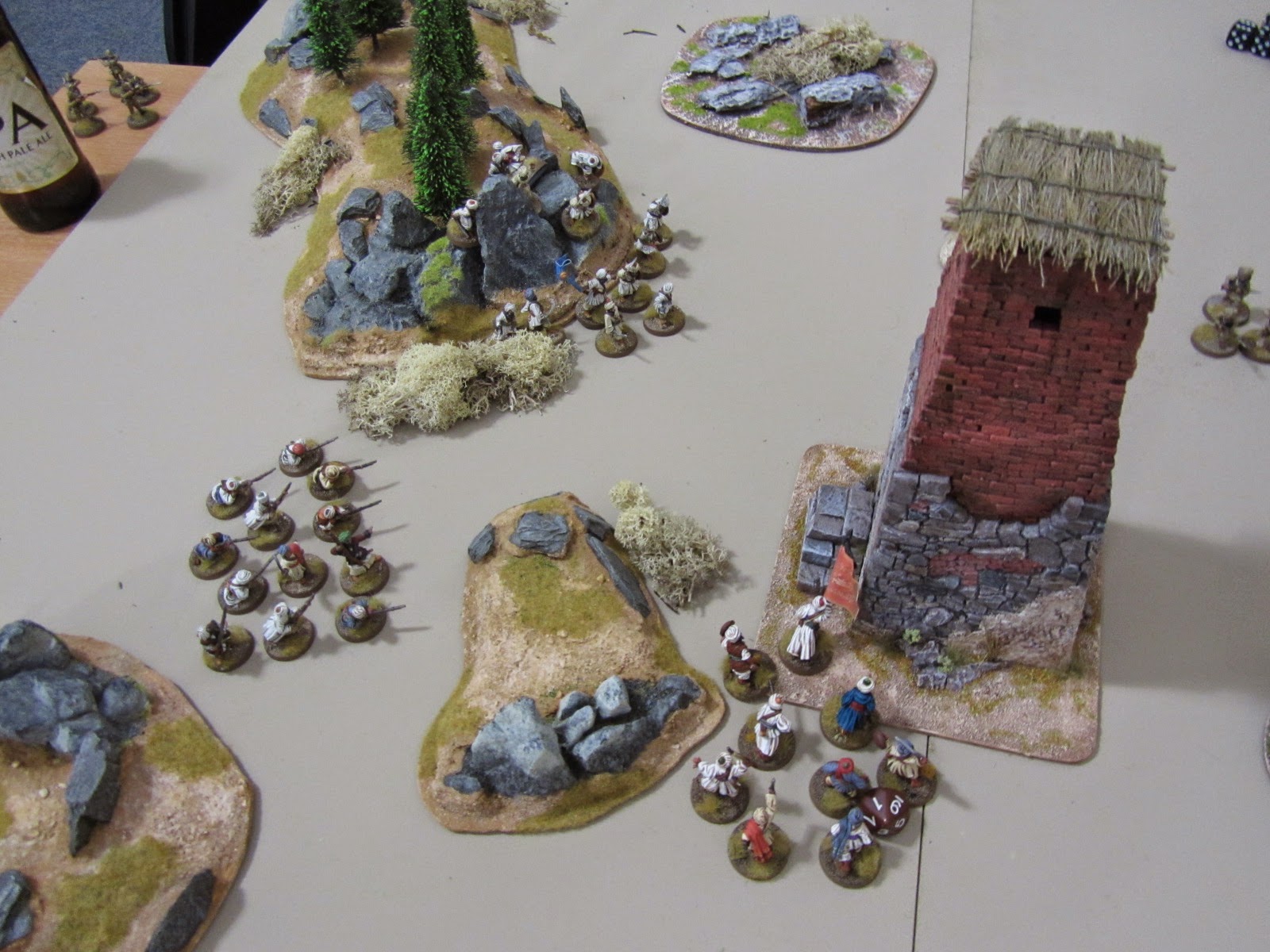 I now have a unit of Foundry Ghurkas, one more unit of Old Glory Pathan riflemen and a Perry Screw gun on the painting table as we speak, with innumerable additional units for both sides (including Afghan regulars!) awaiting their turn in the painting queue.

I really enjoyed this game and am looking forward to another next week. Hopefully using the Ghurkas and an extra Pathan unit if I can get them completed in time!

I think these rules could be really good - I think they'll be ideal for a multi-player big game at the club, as the basic mechanisms are very straightforward and gamers would quickly be able to pick up and play, but at the same time they will reward 'proper' Colonial tactics from all sides. I also think that, as long as the scenarios are good, they'll reward repeated playing too. Very promising indeed!!!
Posted by GuitarheroAndy at 09:04 8 comments: