Hi everyone. I don't even know if any of you are still here, it's been that long since I posted anything.
Am having some serious real life issues at the moment that are taking up colossal amounts of emotional space and physical time, all of which has left me little left for the hobby. However, I had a week on my own at the beginning of the month and decided to get to grips with something I've wanted to do for a while, but hadn't had the wherewithal to do: Something with Republican Romans. I've never found a rule set I like for Republican Rome. WAB 1.5 looks good but complicated and needs massive armies (3000pts really) to do it justice and I haven't the energy for that. So I'm looking at adapting Dragon/Lion Rampant for some Samnite Wars (and possibly Punic Wars) action.

More detail on this idea later, but here is the beginning of the project: 2 Hastati units base coated, dipped and Dullcoted with Leves/Rorarii on the way. Victrix do such superb plastics! And they aren't too tricky to paint.

Anyway, it's not much, but it's a start... I hope to have 2 Leves/Rorarii units and a Principes unit to the same standard by next weekend, all being well, ready for a massed highlighting spree. That'll be half the Roman army (probably - more on this next time I get to you.) 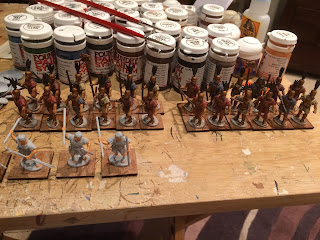 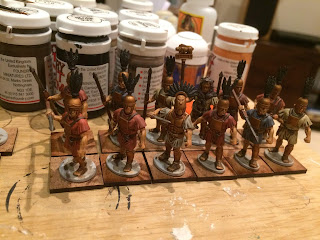 Posted by GuitarheroAndy at 14:41 No comments: