Playtesting for Partizan - The Relief of Fort Passanda

On Tuesday, Andy MacTaggart popped over to Guitarheroandy Towers for a play test for the TMWWBK game we are putting on at Partizan in May - "The Relief of Fort Passanda". I'm not giving too much away, but here are some play test pics. The game worked well, but we will be making a couple of tweaks to improve it further.  Also, do excuse the part-painted and un painted minis - am still finishing the last few bits and bobs! 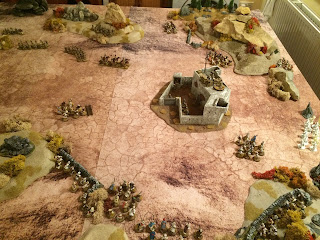 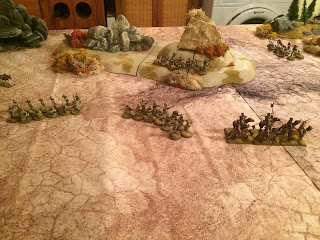 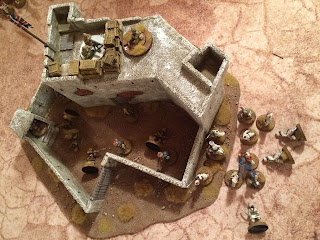 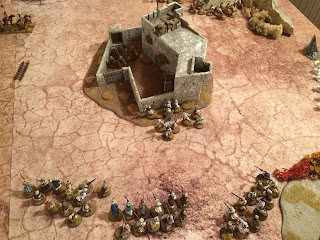 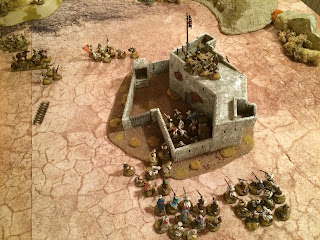 If you are at Partizan, do pop over and see us. The game will run in a similar way to the one we did at  the Hereward show last year - a 'demo-participation' so we can take 4 players to play it through with us. Looking forward to seeing you there...
Posted by GuitarheroAndy at 00:17 6 comments:

Labels: Battle Report, Colonials, NW Frontier., The Men Who Would Be Kings

Bitten by the Sharp Practice 2 Bug...

So, last Monday, Rich Clarke of Too Fat Lardies came to the Peterborough club to do us a demo of the soon-to-be-released Black Powder skirmish game, Sharp Practice 2.

I was intending to play, but as there were ten interested players, I opted to sit and watch.

Now, as you probably know, I have never had any interest whatsoever in traditional European warfare in the black powder era, especially not Napoleonics. However, I do have more than a passing interest in the French Indian War, the American War of Independence, the American Civil War and especially the Indian Mutiny, all of which are ideal for these rules.

Anyway, Rich brought along an AWI scenario and what a cracker it was!! The rules just worked perfectly, with all the troops doing exactly what they should and the actual mechanisms are just brilliant! I came away totally inspired and immediately pre-ordered the rules.

Of course, the next question was which period to go for. The great thing about these rules is that 40-50 men per force will give you a great game, so no need to face endless hours painting hundreds of models. This makes it most definitely do-able, so I dug out the Mutineer Miniatures Indian Mutiny rebel Sepoys I bought a couple of years ago and then went straight to both their website and to Empress Miniatures (for the fabulous Iron Duke Mutiny range) and blew over £250 buying enough troops for a force of Brits and a force of rebels. Yup, Indian Mutiny it is (well...first...I suspect FIW and AWI may follow long term!)

Now, a couple of days later, the models I already had from my previous purchase are undercoated and ready for paint!! Of course, the great thing is, they'll also be great for the upcoming Osprey rules 'The Men Who Would Be Kings' about which I have waxed lyrical on here many times.

So, hopefully, in not too many weeks, I'll have some to show you. I also have a few extra NW Frontier minis to paint up for Partizan and a HUGE war mammoth to do for the start of the club Kings of War campaign, but I hope to get them done alongside some Sepoys. Keep an eye on the blog for updates...this is one project I may even get as far as finishing!!!!
Posted by GuitarheroAndy at 11:57 2 comments: