The Three Hunters - Last of the Mohicans models from Conquest/Warlord

A few pics of the Hawkeye, Uncas and Chingachcook models from Conquest/Warlord I painted recently and finished basing tonight.

They are bloody great figures and I thoroughly enjoyed painting them.

They have been painted in my 'dip and highlight' style. The only difference to the norm being that the two native Americans had an extra highlight added to the shirts, which looked too dark without them. 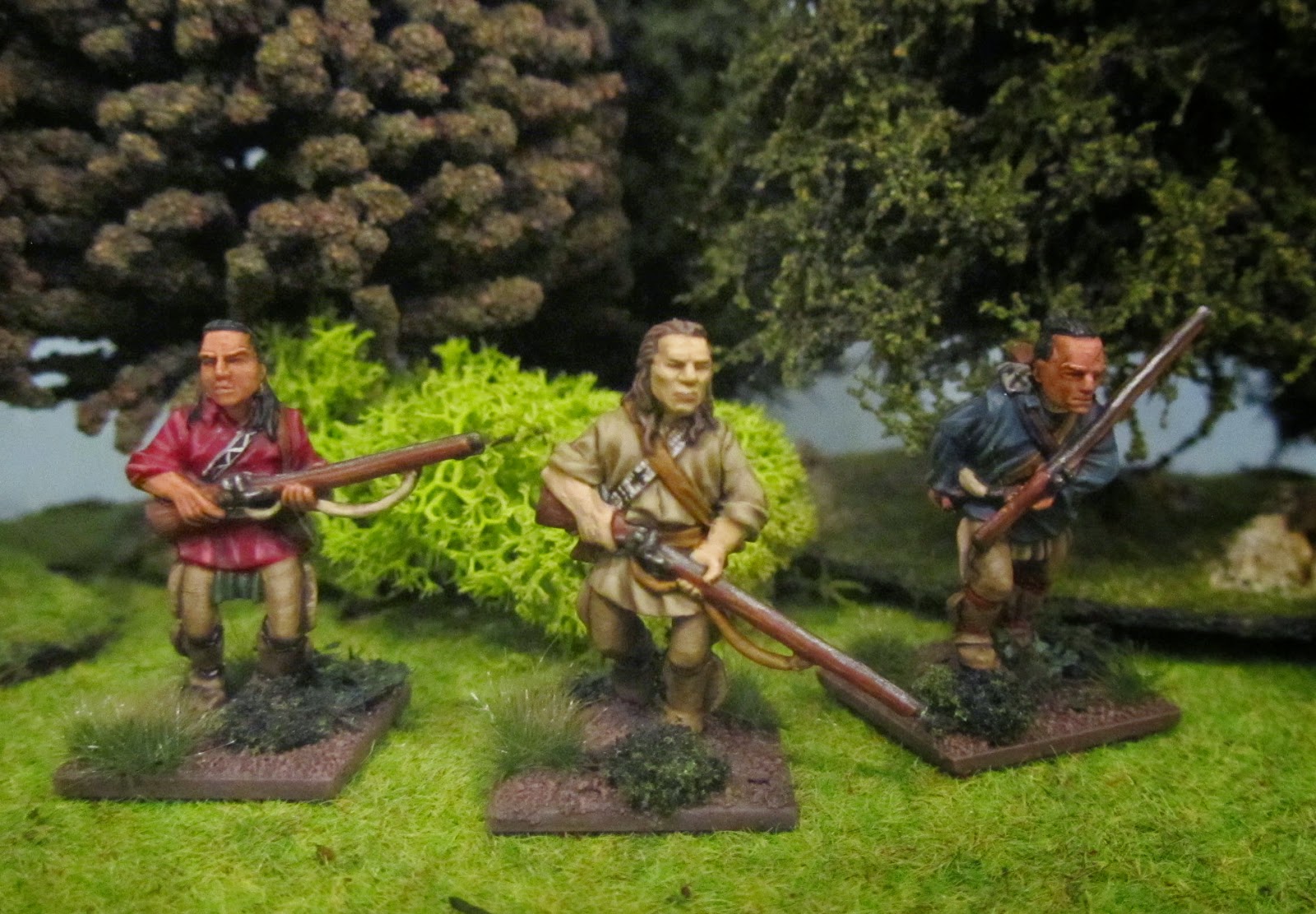 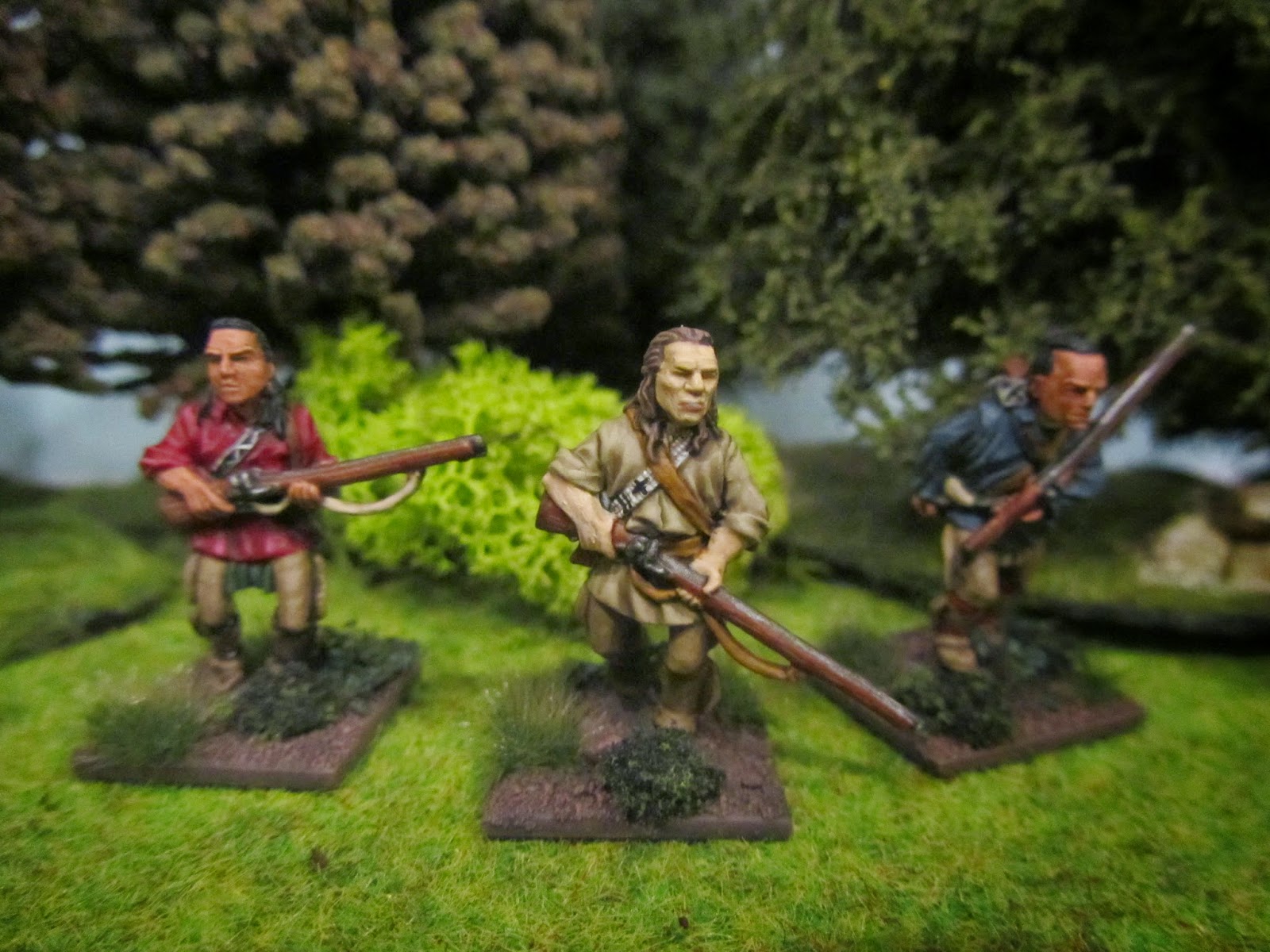 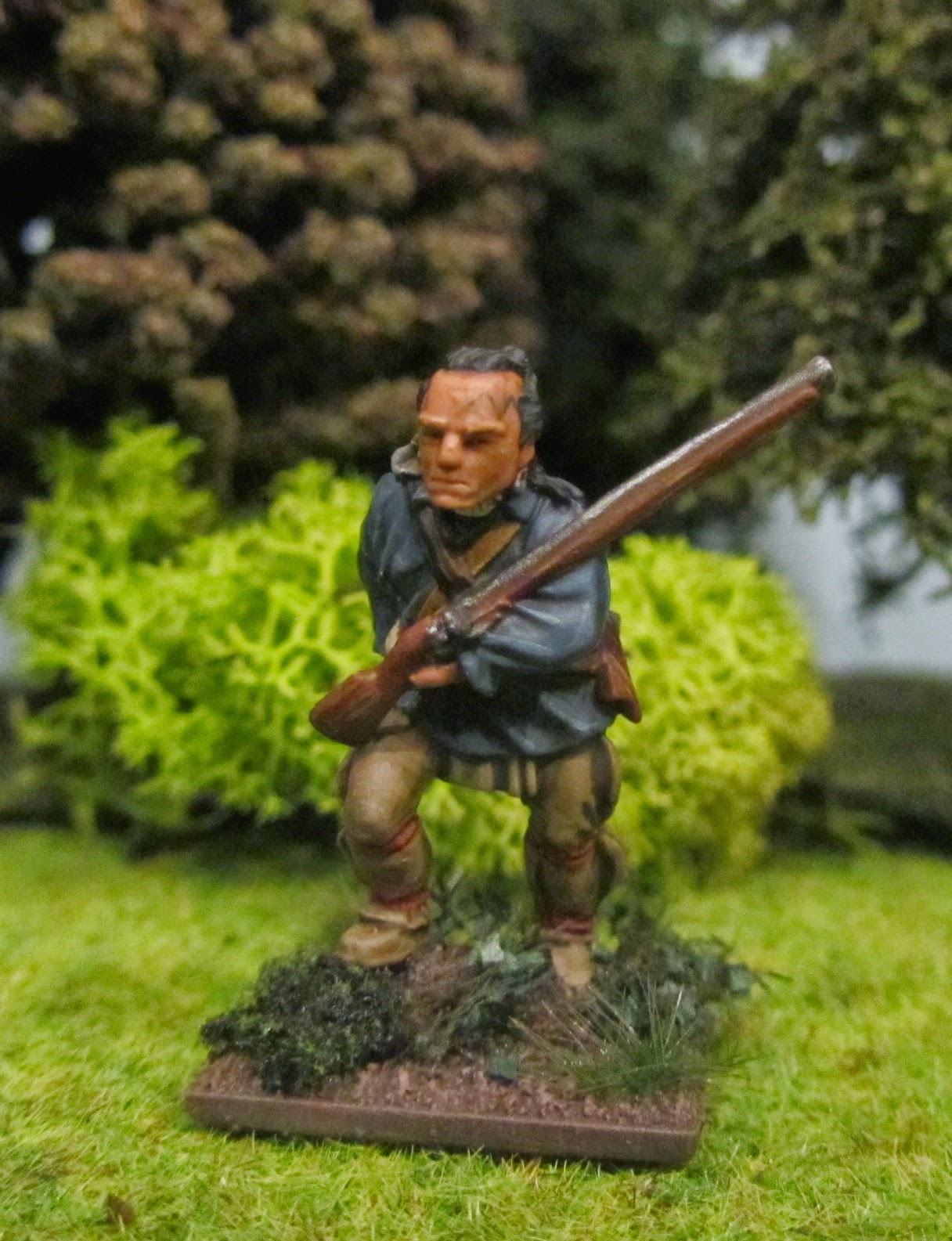 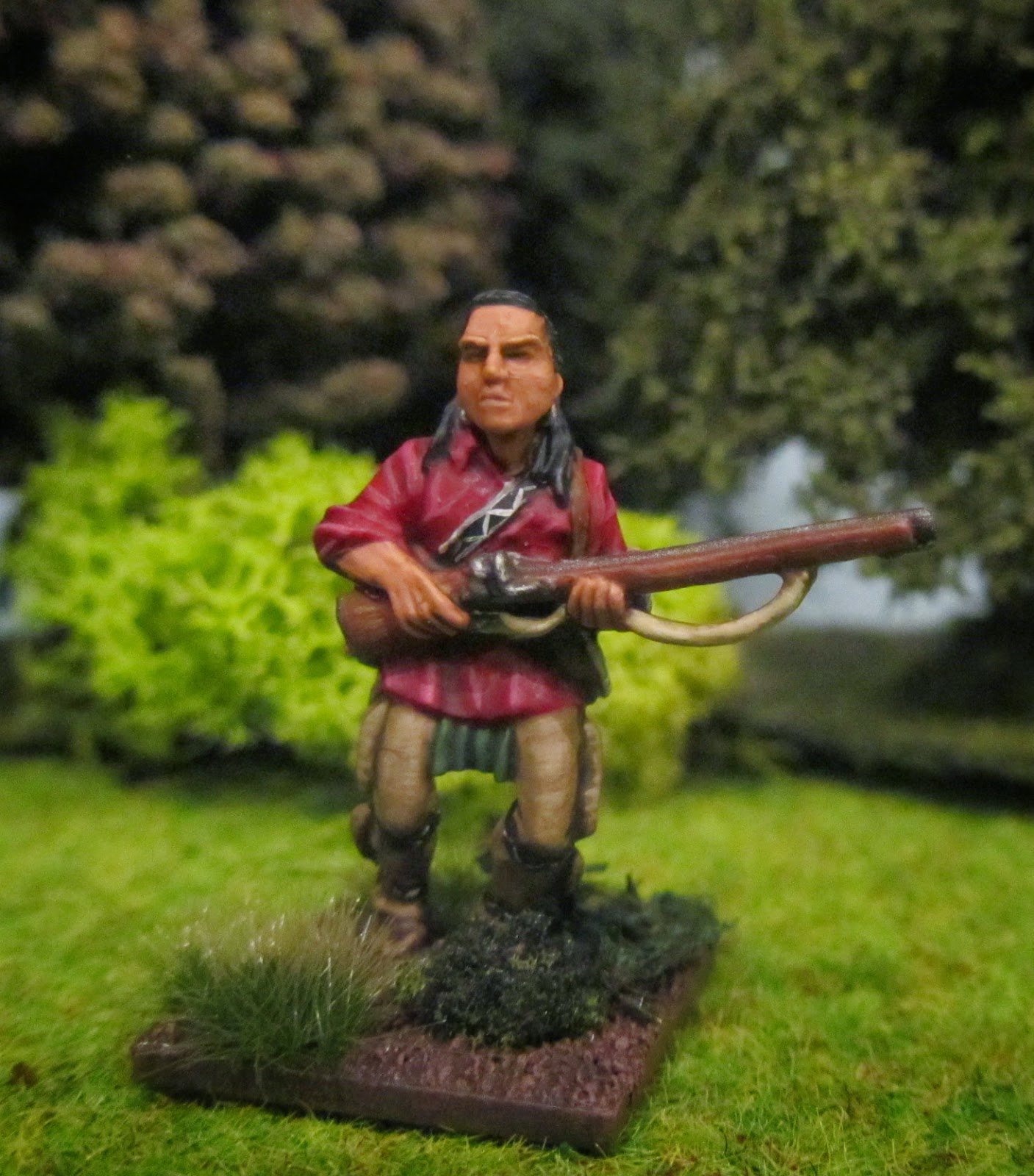 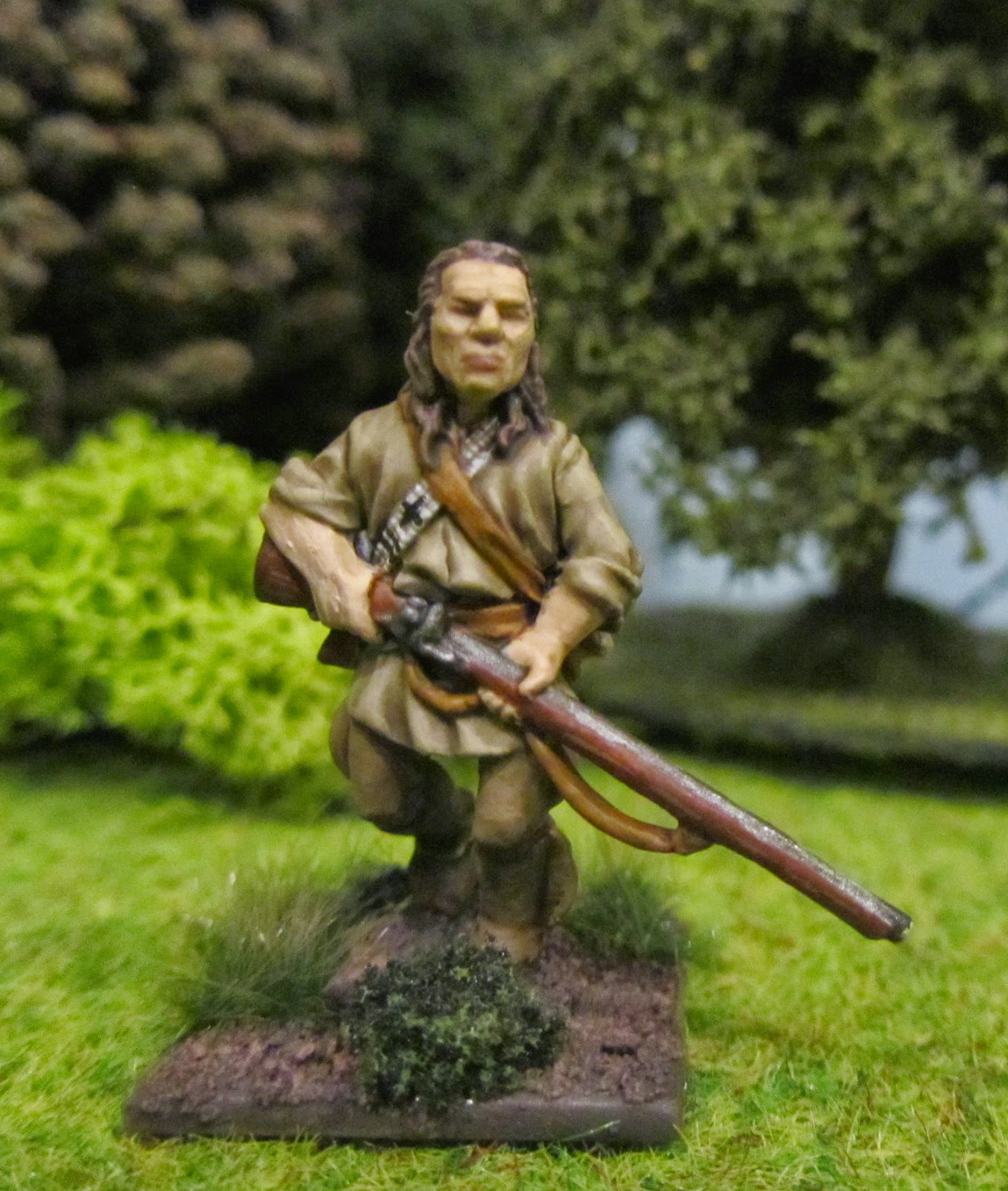 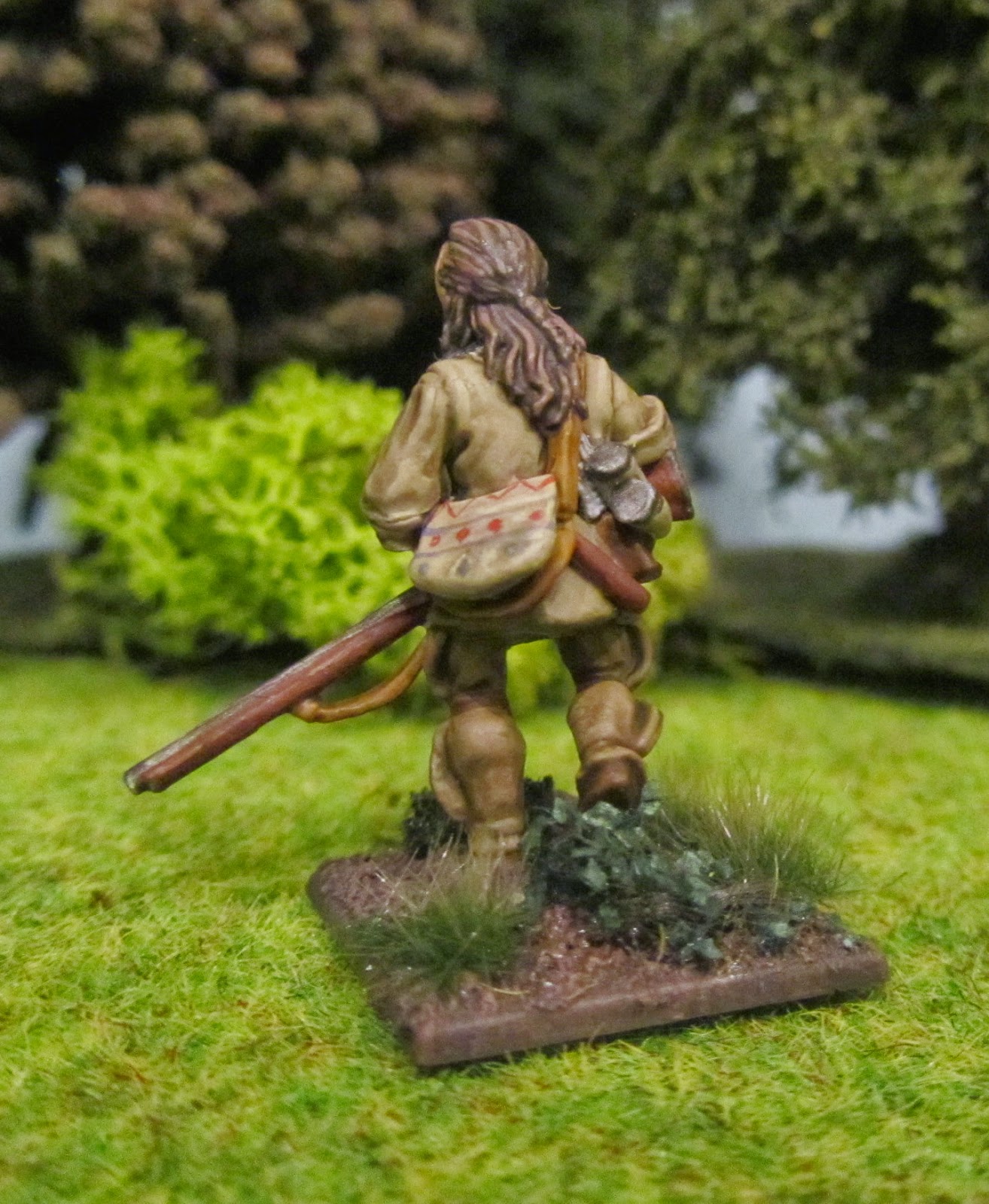 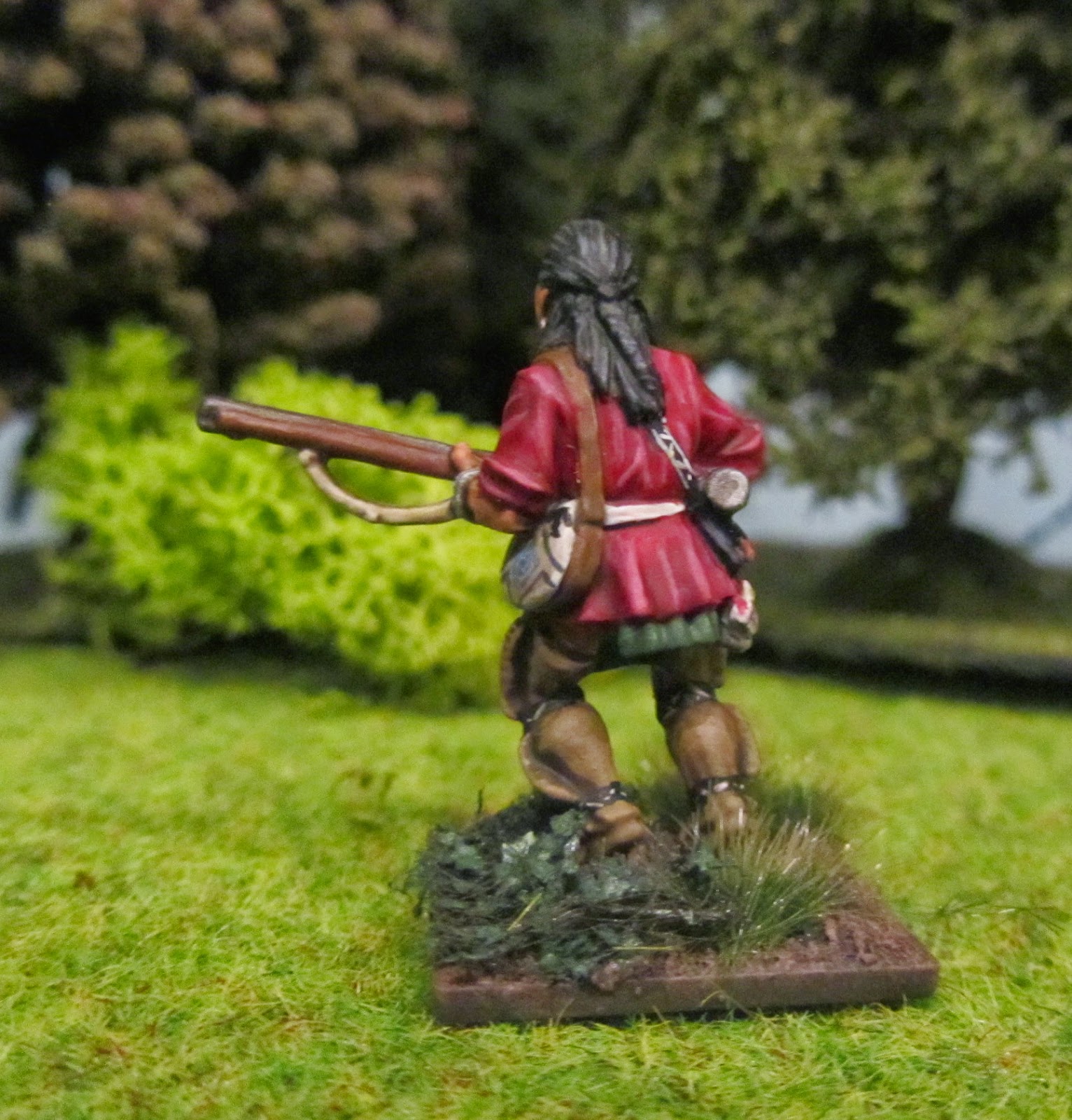 Posted by GuitarheroAndy at 16:35 4 comments:

A First Game of War & Conquest!!

Last Monday, Grahame and I finally got ourselves a game of Rob Broom's Ancient rules, war & Conquest. 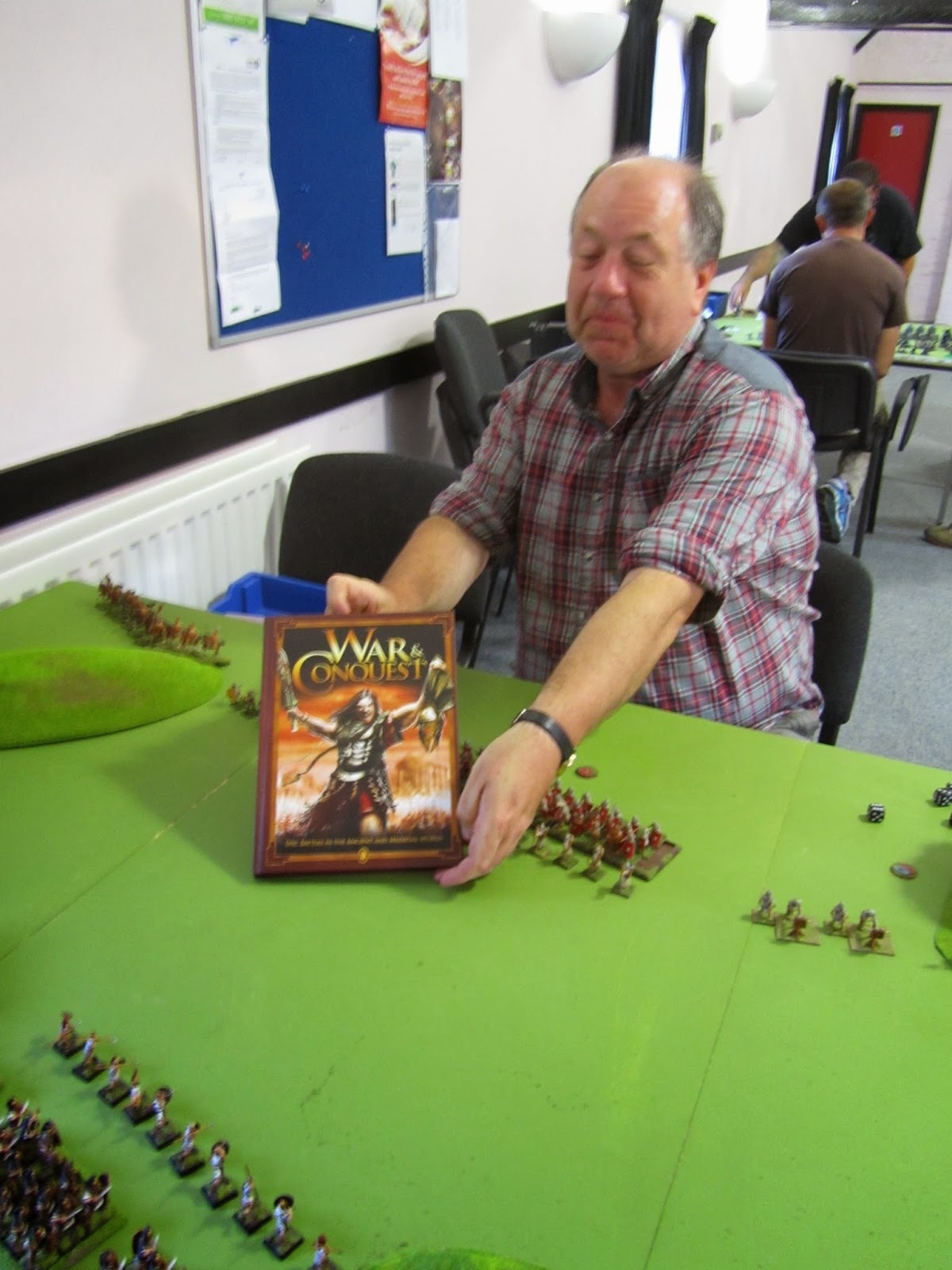 I have had a copy of these rules since their publication in the dark days of WAB's demise, as author (and ex-warhammer Historical head honcho) Rob had taken temporary possession of most of my Arthurian and El Cid models to take loads of photos for the book. Thus, I received a free copy as a 'thank you'.

Now, at that time, I was still a dyed-in-the-wool WAB-ite and, although those rules were clearly on their way out, I had no interest in playing either of the two 'sons of WAB' (as they were coined at the time) which were War & Conquest and Clash of Empires. To be fair, this rash decision was based on my read-through of Clash of Empires, which I thought was just 'WAB with the bits the author grumbled about altered'. I feared the same of War & Conquest, and, as my club was (and still is) playing WAB regularly, I left it at that. My mistake!!!!!!!

What changed my mind? Well, playing other stuff, actually. I mean, don't get me wrong, I do still enjoy WAB, especially Age of Arthur and El Cid games, but in recent months my enthusiasm for it was waned a little and I really just wanted to try something different. A fair few folks in inter-web land have been playing War & Conquest (hitherto referred to as WaC)  and the overall enthusiasm of some (notably Matt from the Wargames Table blog) finally convinced me to give it a try, along with the fact that a few folk at the club had been mentioning it as a 'might give it a bash one night' kinda thing.

So, Grahame and I set to with a Roman civil war game. I brought 2000pts of Marian (1st Century BC - Caesarian) Romans and Grahame 2000pts of EIR. This was because we were originally going to use Arthurian/Late Roman lists but didn't like the look of them - more on that later!

The lists we arrived at were pretty similar to what you'd have got with 2000pts of Romans under WAB 1.5, which was handy as that's familiar territory for both of us.

So, we decided to go with the 'Autumn' deployment (see pic below) and got on with it.

The first thing about these rules that I must stress is that, yes, there are similarities to WAB. Many of the dice rolls needed to hit things, kill things and take armour saves are exactly the same - lots of 'I need 4+' etc... Also, there are similarities in unit size, composition, etc, but this game is SOOOOO much more than just a re-write of WAB.

Firstly, the IGOUGO mechanism is different, as you roll a D6 at the start of each turn to determine who has 'strategic advantage' and who can therefore go first or second. This means that you can get two turns in a row on occasion - very useful! Although you can influence these rolls by a cunning device called Strategy Intervention Points (SIP). Basically, characters (called 'personalities' in WaC) have access to one or two (or more on occasion) of these and they allow you to roll extra D6 when rolling for strategic advantage or for morale checks. When rolling the latter, if you succeed, you even get your SIP returned to you, which is cool!

Combat and shooting are similar but subtly different. In W&C, combat is simultaneous - chargers get a +1 to their combat bonus in resolution. In WAB, you roll to hit, roll to wound, then take armour saves. In WaC, you roll to hit, then the opponent takes his armour saves. any unsaved dice are then used for the 'kill rolls'. Weapons tend to affect kill rolls, e.g. throwing spears allow you to re-roll the kill rolls in the first round of combat - all of them, not just the misses - handy if you roll dismal 'kill dice! Also, the longer the combat lasts, the more models fight, so my Romans go in with the front rank in round 1 of a combat, with their plum gaining them +1 armour penetration (-1 off the save throw) and the re-rolled kills. In the second and subsequent round, the second rank join in with the glades. Thrusting spear-armed troops fight with 1 rank if they charge, 2 if charged then 3 in subsequent round. Pikes end up with 4 in subsequent rounds! Neat!!
In combat resolution, victorious troops gain a 'push and shove' bonus. This is like WAB 2.0's 'momentum' but it is cumulative over rounds of combat, so if you keep winning, the push and shove goes up each time...neat!!

Morale is also subtly different... formed units over half-strength roll 3 D6 and pick the 2 lowest (with the basic mechanism of rolling low as per WAB) They revert to 2 D6 if below half strength.

There are other neat differences too around the use of 'disorder' (prevents rank bonuses, etc). The use of 'command tests' to allow you to do certain things (e.g. march - sorry...'double pace' even if close to the enemy, etc). Also, personalities add D6 to combat, rather than being all-powerful death machines in their own right! This means that if you add your general to a unit of peasant infantry, he fights like they do. I like this, as it means that you tend to put your general where he should be  - with some kick-ass elites.

Anyway, a bit of a summary there of the key aspects of the rules. In terms of our game, as with every first try at a set of rules, we made loads of mistakes. However, the game still flowed well. Grahame gained a victory, albeit not a slaughter. During the pre-battle phase in a typical 'pitched battle', you randomly select and hide from your opponent what your battle objectives are. Grahame and I both achieved ours in this game, but he had killed more stuff than me, hence the victory. Once again, this was partly achieved by more masterly use of skirmishers and by me rolling some dreadful armour save dice on my legionaries when they were being shot at.

I started taking pictures, but the rules reading took over and so I only took a few, below... 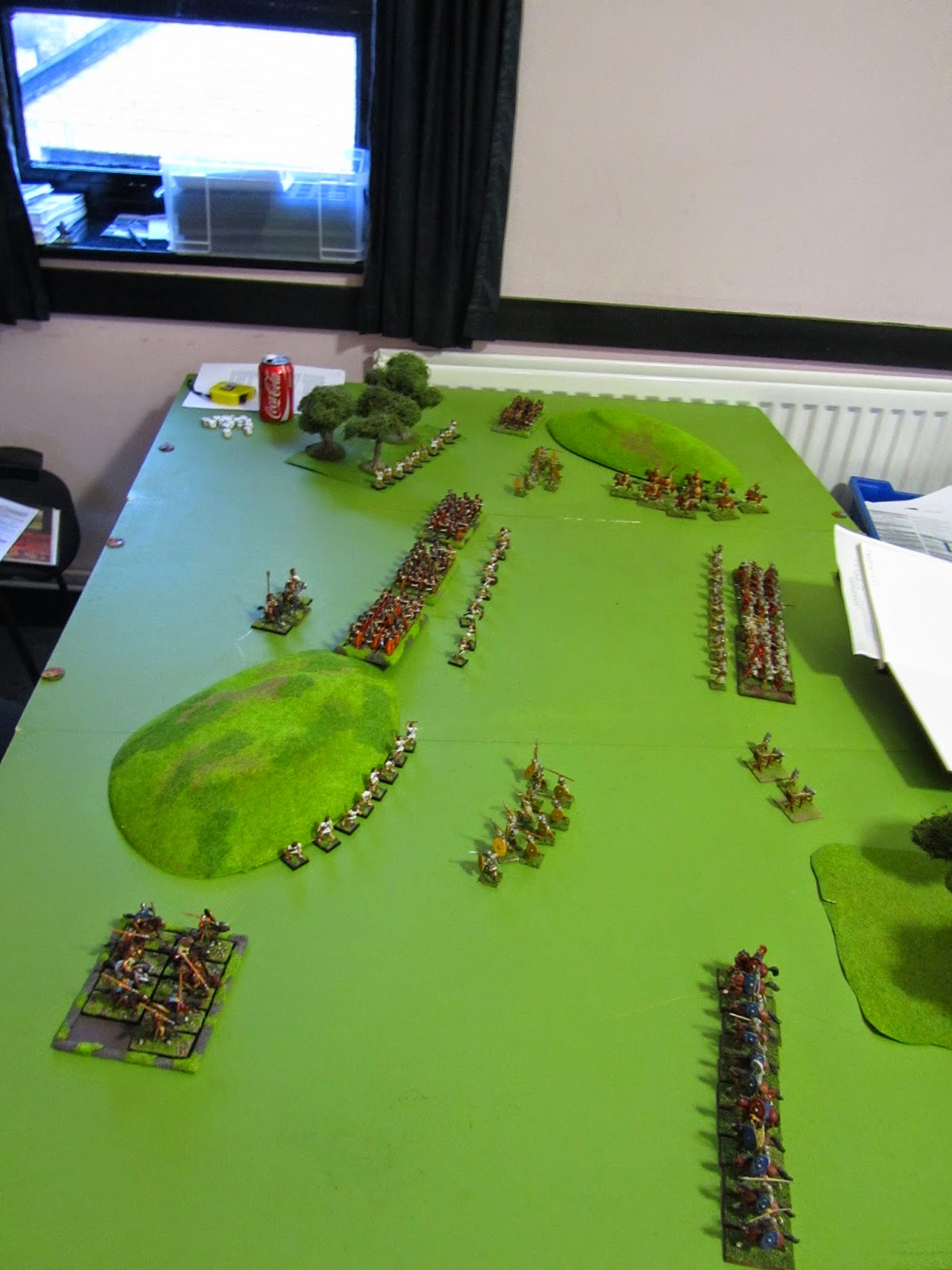 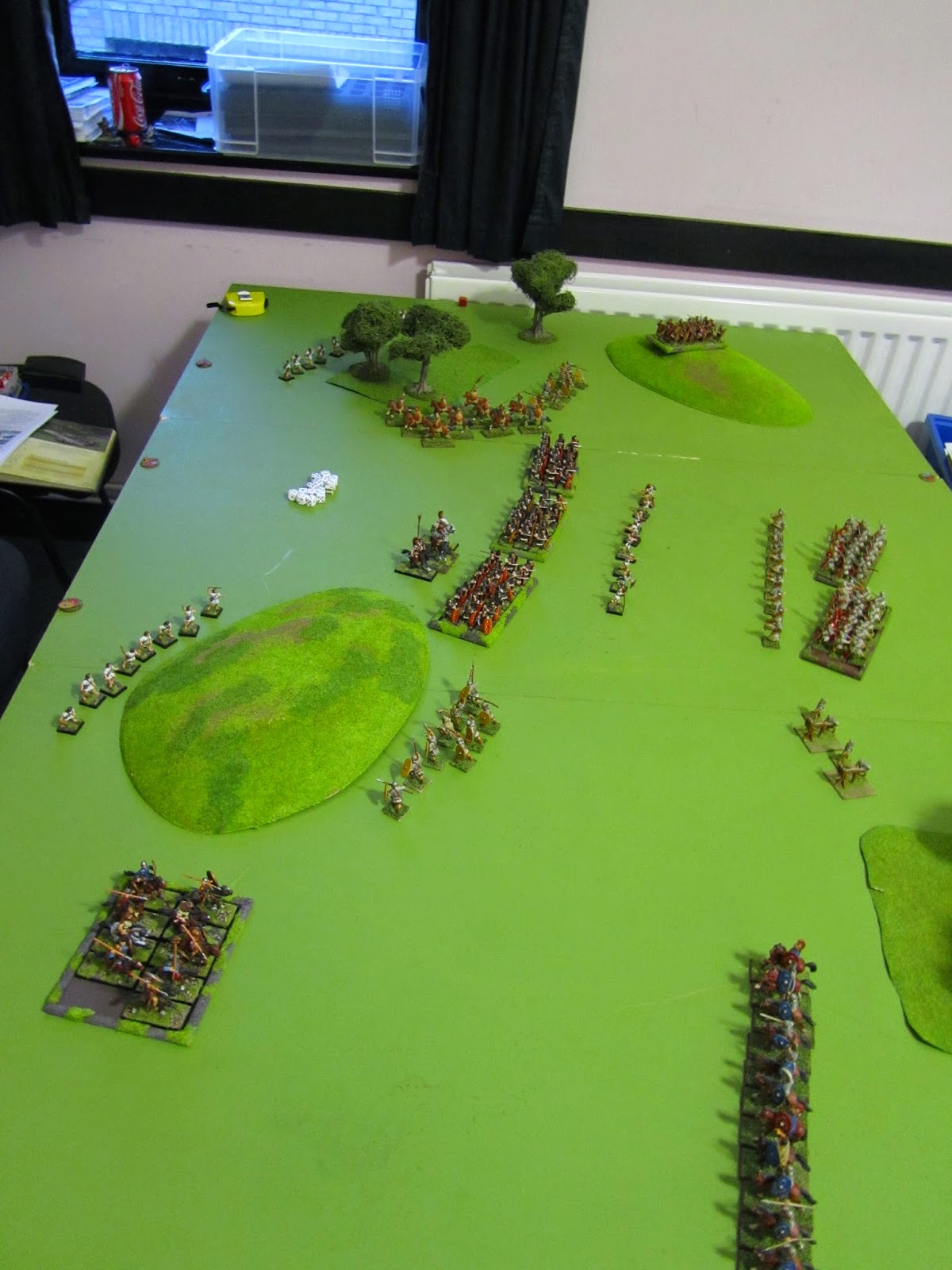 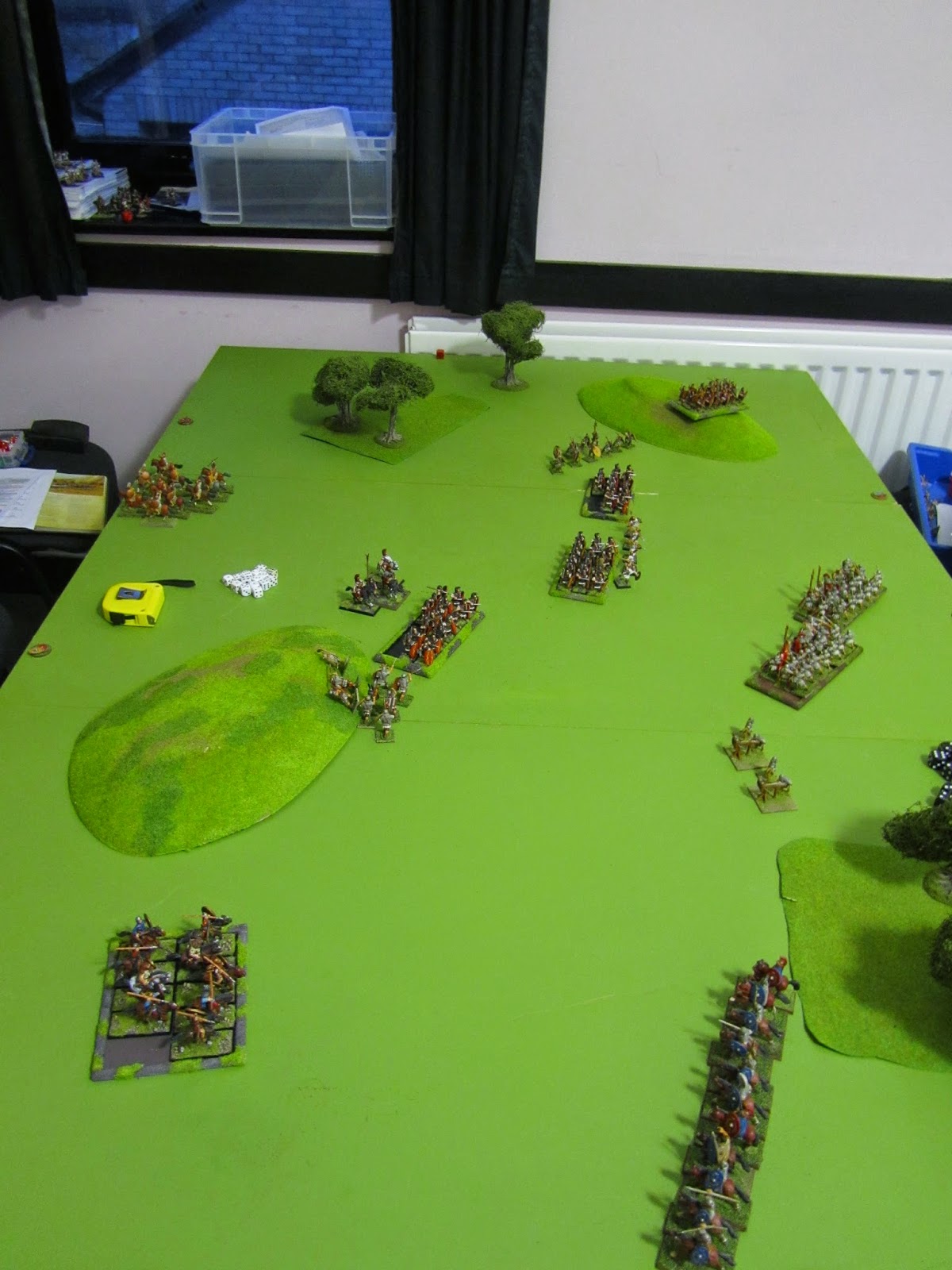 So, overall, we thoroughly enjoyed it! I can see myself playing this very regularly if I can find opponents!!

The only drawback to it as I see it is that some of the army lists are not very well-formed yet. This is inevitable as it's a one-man operation running the whole thing, and Rob can't be an exp[ert on everything, or have time to do it all. So, a number of gamers are helping out and I have offered my services to Rob to help with revising the generic lists from the Late Roman and Arthurian era. Wargames Table Matt has already started some Arthurian lists which I have been busy tinkering with. This is making me a nice little project - I have always wanted to become involved with army list creation and this seems like a great opportunity so I am very grateful to Rob for allowing me to have a bash.

Watch this space for more developments...
Posted by GuitarheroAndy at 06:00 9 comments: