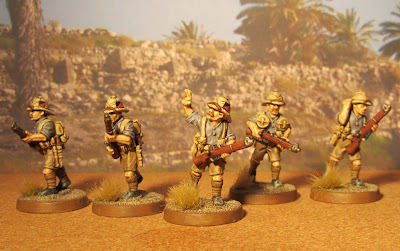 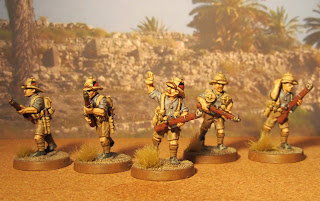 The Pine Wood Of Tevar in Wargames Illustrated!! (plus other news)

Hi All
Just a quick 'heads up' that a mahoosive (14 page!!!!) article of the Pine Wood of Tevar game, written by James Morris and featuring gazillions of lovely pics of our armies, should be appearing in the May issue of Wargames Illustrated. I have seen the proofs of the article...it's really rather mega!!!!

In other news, painting has stopped in the Guitarheroandy household. I just can't get up any enthusiasm for it. This is largely due to work pressures, family stuff, band stuff and the fact that I am regularly attending wargames club for the first time in over a year. We are mostly playing the dark Age skirmish rule set called 'Pig Wars', which is fast, frantic, bloody and great fun - about as far removed from WAB as one can get in mechanics, but just as much fun. However, contrary to many of the WABbers out there, I am not stopping playing WAB in the light of all the new ancient sets coming out, or as a result of ForgeWorld's apparent lack of desire to bring out new supplements. In fact, I am attending an event in April (Fall of the West/Age of Arthur) and my wargames club is about to start a Late Roman Republic/early Empire campaign, so all is well and WABbing here in Peterborough at any rate!

I do hope to pick up a paintbrush again soon, but need some inspiration! I keep looking at my colonials, but it feels like a mountain to climb...and I still have more Arthurians I want to do, but somehow...well...can't be bothered!! At least my repetitive strain injury has massively improved, which means that I am physically able to paint should the muse decide to return!!

I hope to post some pics from the WAB Spring Open (if I remember to take a camera!) and will keep you posted on developments with painting should any occur!!

Thank you all for your patience and for continuing to look me up on here occasionally...

Andy
Posted by GuitarheroAndy at 03:36 3 comments: 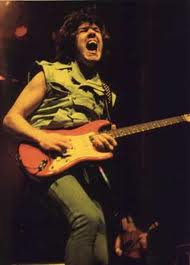 Another of my guitar heroes from my teenage years bites the dust...

Well, hello one and all. Happy New Year! Sorry it's taken me nearly a fortnight to get around to that!!

Well, the repetitive strain injury is no worse, although I haven't painted in weeks and haven't had a proper session on the guitar in a while either. Now Crimble is out of the way, I can at least get the painting kit back in the lounge so I can try a bit now and then when I get a mo in the evenings, not that I seem to have much time spare these days...

So, what's the 2011 plan? Well, changes are afoot from what I thought I'd do in my last message: My wargames club is going to run a WAB 2.0 Late Republican/Early Imperial Roman campaign around Easter and I do want to paint a new unit of Auxiliaries to go with my Sulla Romans. I have a load of Foundry Greek peltasts and will be using them (to fit in with my 'Sulla in the East' theme). Ideally, I need to layer paint them to match my Caesarian legionaries, but I may do them in the style of my (on hold) repo Romans, so basecoat, dip, one highlight...depends how the arm holds out and how lazy I get/how little time I end up with!! Once they are done I will have 3500pts of Romans which is cool. I did field them all in a game against my mate Grahame's EIR last week and won a close-run victory in a 5 and a half hour epic encounter!!

I have also been on the hunt for alternatives to WAB for Age of Arthur. I have found two great little sets for skirmish type games (Brytenwalda - http://brytenwalda.blogspot.com/) and Tod Kershner's 'Pig Wars'. Both are light years away from WAB's systems and need far less models. Pig Wars is especially good for multi-player games. If you want a copy of Pig Wars, join the Pig Warriors Yahoo group where you can contact the author and receive a download of the rules for $10, plus access to various additioanl files in the Yahoo group's file section. Well worth a look!

Anyway, along with these, I have been writing my own rules for the period - sort of GW Lord of the Rings in scale (30-60 models per side, large scale skirmish). I now have almost enough to playtest, I just need to type up a couple of playtest scenarios. Some of you already know about this and have offered to read/playtest, which is kind! Expect to receive an email shortly! If any others fancy a look, let me know. I am not claiming that they are great...they may not well even be reasonable, or even remotely playable, but it has been a fun and very interesting experience writing them! If you do have a read/play, you'll see bits of Triumph& Tragedy, bits of LOTR, bits of WAB...all given my unique 'twist'. Am hoping to start my own playtesting shortly as well, so watch this space for further info...

Talking of Arthurians, I do have a hankering to paint some more Age of Arthur stuff and willbe doing a few more Franks/Saxons this year, enough to do a warband for each of the rulesets mentioned above, but not a full WAB army yet. I also want to do a unit of Wolftail warriors and Arthur's cavalry based on Cornwell's books. They'll be useable in the skirmish rules and might see light of day in aWAB army at some point. It may take me months to do them, but I intend to have a go!!

I also intend to do a bit more with my colonials. I intend to get 2 or 3 squads of Brits and another mass of Pathans done in 'dipping' mode this year. I have half a Sikh unit basecoated already and intend to finish those this month.

Finally, on the back-burner are the Repo Romans, as I'll not have time to do them this year and gaming the era isn't high on my priority list this year. Also, I do intend to paint 2 more El Cid units: Knights Hospitaller and spearmen in the livery of the Hospital to join my 'Alfonso the Battler' El Cid force. These will wait til late in the year if I do them at all this year...

So that's me so far. Hopefully I wil get my a*se in gear and post more this year. Thanks to those who still follow this blog. I appreciate it.