Ha! That got your attention didn't it?! :-) Sorry that there's no eye candy to go with the title...just advance warning that my El Cid army will be making an appearance at 'The Other Partizan' on Sunday September 5th at Kelham Hall, Newark. Yes, James Morris has kindly invited me to join him in putting on an El Cid demo game! We shall be doing 'The Pine Woods ofTevar', where El Cid took on the unfortunate Count of Barcelona and destroyed his army, capturing most ofthe Catalan nobility in the process!! Naturally, I shall play the Count of Barcelona and James shall play El Cid...for two reasons:
1. James wrote the El Cid supplement - who else could be El Cid?
2. El Cid needs to win!!!!!! With James playing the great man, that's significantly more likely than if I do!!

Scenario details to be revealed on the day (James and I have spoken and he is currently drafting it out) but suffice to say that it will be great and will look fab, as the terrain will be marvellous and James' army looks stunning. He's also painting new character models, which I'm looking forward to seeing!!!

Anyway, I'm doing a bit of painting for the event. I shall be increasing the number of models in one of my cablleros hidalgos units, as well as adding additional models to my Spanish and Andalusian jinetes units and my Peones unit. I shall also be adding an additional character (4 Catalans are named in the sources for this battle, so I shall field all 4!) and a small unit of Ballasteros (x-bows.) As with all this army, the models are Perry. Look out for them on the blog over the next few weeks and if you come to Partizan, do drop by and say 'hello', especially if we have thus far only corresponded online. I always like to put a face to a name whenever possible...

Following the event, I shall continue to paint El Cid stuff as I hope to go to the October Warhammer World El Cid campaign, also being run by Mr Morris and for that I need 2500pts...YIKES!!!!!! That's one more unit of caballeros and another of peones. to add to the load I already have painted...better get the painting going!!!!

Andy
Posted by GuitarheroAndy at 07:17 3 comments:


Apologies...some pics in the last post weren't clickable...I think because I re-arranged the order after upload... So here are the full army shots and some cavalry shots that SHOULD be clickable so they expand! 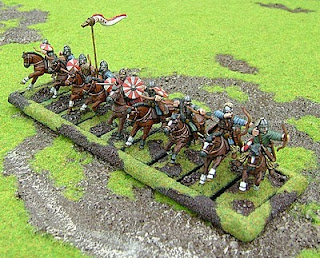 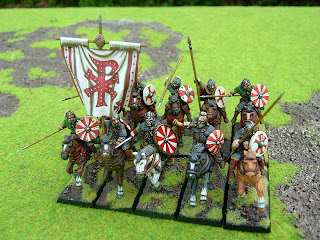 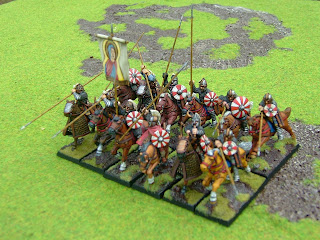 Let me know if they don't... You'd think I'd have got this blogging thing sorted by now wouldn't you!!??!!
Andy
Posted by GuitarheroAndy at 01:31 6 comments:

Hi Folks
Here is my 1500pt Justinian Byzantine army that I took to Hot Lead at Gripping Beast HQ lasy month. The army is built from the Beyond The Golden gate supplement, which was quite a challenge, as I wanted to take an army that was 'opponent friendly' and which suited the event. Most WAB players seem to feel that BtGG armies are rather OTT so I wanted to disprove that. Accordingly, I decided to take no Bucellarii, as they are HUGELY cheesy, being strength 4 with options for kontos or thrusting spear, making them strength 5 on the charge!!! I also decided that I would take no kontos armed troops, using thrusting spears instead, as I actually feel that, as well as being more 'friendly', the thrusting spear rule more than adequately portrays the use of the various kontos-type weapons in use at the time - I hate the 'always strike first' rule that Kontos gives, unless I'm playing against other kontos armed troops at my wargames club, of course!!!!

Here are the Comitatus: My late Roman cataphracts remounted on unarmoured horses (they can also be used as Romano-British commanipulares now!) 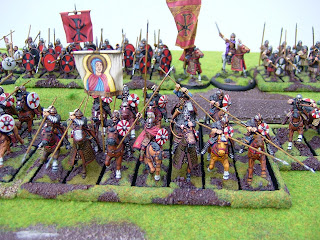 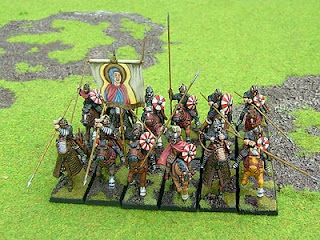 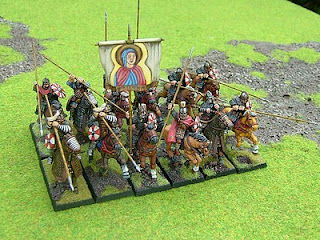 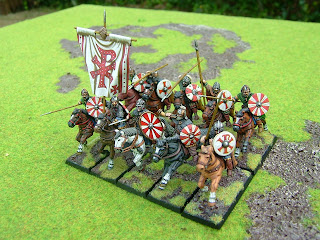 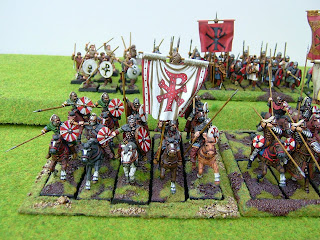 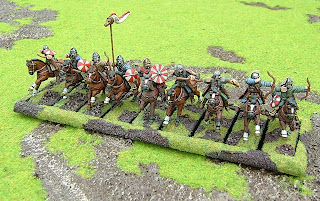 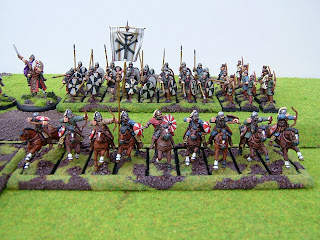 The Romano-British milites masquerading as Eastern Romans. I chose the most 'Roman' models for this unit. Next to them, repainted Roman archers (tunics and bucklers) 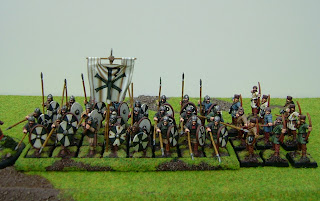 A unit of Late Roman infantry with repainted tunics and shields. Again, originally painted 10 years ago in 'parade ground' colours, now redone to match my other models. 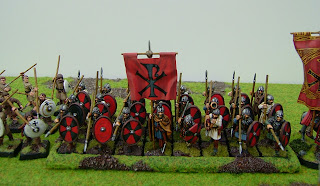 The Magister - West Wind's Arthur model, who also commands Romano Brits for me! 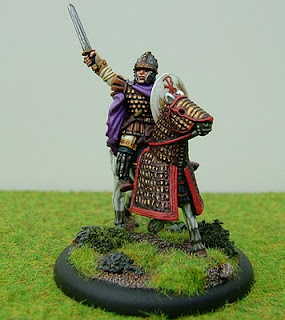 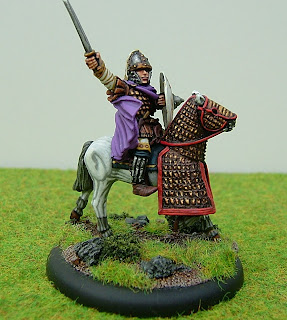 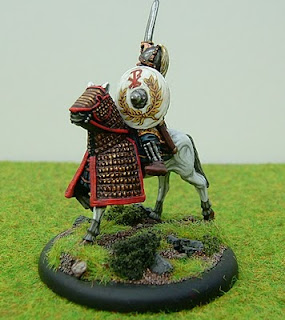 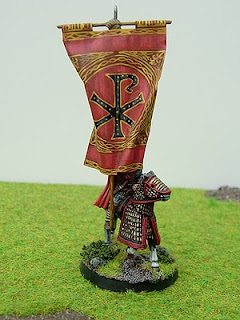 So, there you have it!!
On the day, they trashed a 1000pt Sassanid army in the 'Saving the Plunder' scenario. Basically, the Persians had to get a wagon load of booty off the table before I caught it! After enduring a turn of massed archery, I decided that a full-on charge was the order of the day. As the Sassanid player had also not taken kontos, the fights were evenly matched, but my troops came out on top, his allied Parthians and Lakhmids fled and the rest of the game was me chasing down fleeing troops - oh, and capturing the wagon! Victory by 1500pts to 0!!
Second game was against Shieldwall Welsh. I only had 1000pts in the 'Scared Shrine' scenario that I've talked about on here before. I was hideously outnumbered and due to an unlucky panic test failure early on was on the back foot all the way through. Luckily, I had read the scenario victory conditions carefully and played very well by sticking to those and only lost by 200 ish points, so a close-run defeat/draw.
Game 3 was agaisnt Romano-British with Welsh allies. The Romano Brit player played the scenario very aggressively (it was 'herediatary enemies - 2 random units each with 'hatred') and destroyed my infantry before I could destroy his flankers and get in his rear. In the end it was a draw - I lost by 85 points in another really good game.
Game 4: Multi-player game. Me and some AoArt Picts vs 2 Rus armies, 1 pagan Rus and 1 Era of Princes. This was a fabulous game where I managed to outmanoeuvre the Rus opposite me while his ally utterly (to the very last figure) trashed the Pict allied force. As a result, of the 4 players, the Era of princes Rus player got about 2000 VPs; I got 1150, the Rus opposite me got about 300 and the Pict about 100.
All in all, I came about 15th out of 30 ish...way better than usual. If I'd played a few more games and practised co-ordinating my cavalry better, I'd have done even better as that was what let me down in game 3 and 4 particularly - I just took too long getting into position for the killer charges... Still, none of my opponents found my army 'Cheesy' or 'OTT', so I reckon that was a result! I'll use it again for sure and am about to paint a unit of Huns to go with it (once I've done a load of El Cid stuff for a demo game and gaming event in October!!)
I hope yuou enjoyed this post! It's been a while since I showed you any stuff!!
Cheers
Andy

Posted by GuitarheroAndy at 10:29 5 comments:

Hi there.
Seems that, in my efforts to prevent spam, I made it impossible for anyone to post comments! Try it now. It should let all registered users (incl open ID) to post and I have set up moderation, so that I can see in advance if any crap arrives and thereby filter it out!!

Cheers
Andy
Posted by GuitarheroAndy at 10:20 No comments: