Went to Campaign in Milton Keynes today with Cameron, as his mum was away at a holistic therapy show in Birmingham.

It's an odd one to go to, as it's full of competition gamers playing their games and is slap-bang in the middle of the shopping centre! The latter means it's free entry and they get a fair bit of 'passing trade', which is cool.

Anyway, the club was represented with its Dambusters Challenge game that won an award at Salute this year - sorry, didn't get pics as I was playing it with Cameron and forgot to go back and take photos later due to us getting involved with a Darkest Africa participation game (of which more in a mo) but do head on over here to get an idea of how awesome the Dambusters game is! Cameron and I managed to avoid all the Jerry flak AND hit the dam... Jolly good show... Brilliant idea, brilliantly executed. Well done, club-mates!!

So, having destroyed most of Jerry's industry with nary so much as a shred of shrapnel in the fuselage, and having gained our medals, we wandered round the rest of the show and ended up playing a fabulous Colonial game with Black Wolf wargamers. This was an awesome game where Cameron commanded a British force of 2 units of Naval Brigade types and 1 unit of redcoats attempting to get to the safety of their river boat having burnt the village of a rebellious Ngoni chief.

Although in hindsight, the rules were weighted fairly heavily in favour of the Brits, while in-game, this was not so evident and there were a few nail-biting moments before Cameron finally destroyed the native force and got his men to safety! He LOVED it! So huge thanks to the Black Wolf guys who ran it really well and were brilliant with Cameron. A very successful participation game and I shall be taking some lessons learned from this to our own Hereward show in November where I intend to run a Colonial participation game with Andy Mac.

Here's a couple of pics of a little boy having a FABULOUS time!! 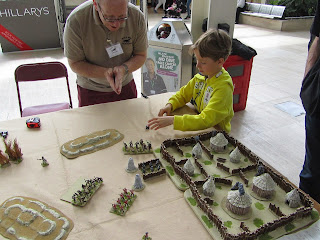 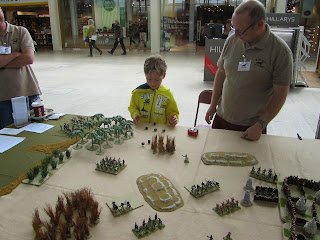