Brilliant day last Sunday at the club! We hosted the second War and Conquest 'Age of Warlords' gaming day, with participants either trying to cause (or prevent) the fall of the Western Roman Empire in the mid 5th Century AD. I had written the lists prior to the same event last year and they had seemed pretty well balanced last time out.

Once again, I took my Patrician Romans. This time, I restructured my force so that it was very elite-cavalry- heavy, fielding my Bucellarii as Huns, supported by foederate German nobles and Hun horse-archers. This was backed up by one unit of Roman pedes and a unit of Germanic foot who had been whipped from the Roman fabricae, so were armoured, and equipped with with heavy thrown weapons. There was an additional unit of Roman sagitarrii and I had 4 personalities - 2 Roman with the bucellarii and 2 Germanic - 1 with the mounted nobles and one with the infantry. This gave me 5 SIPs...very useful they proved too!

Most of the armies present were significantly bigger than mine - players having gone for troops and often big units of them to get more dice in. We had a fair few Patrician Roman armies, several Saxons and a Frank, maybe some Romano-British too...can't quite remember. But each army did have its own 'character', which was nice - no two forces had been composed the same.

Due to one player falling ill on the day, I only got one game in during the afternoon, against George ad his Heptarchy Saxons, so I spent some of the morning downstairs playing some Sci-fi thing by Spartan games (pretty good fun actually, despite the fact I don't really like such games normally) and making tea!

My game was really good fun! It went to the wire! I initially drew the 'kill your opponent's 2 most valuable units' objective. Well, no way my poncy late, late Romans will kill Saxon Gedriht, so I expended a SIP to choose one and went for 'get an unbroken unit into the enemy deployment zone and prevent him doing the same.'

I decided to play aggressively, as George's army was bloody enormous! However, he only had one unit of Gedriht, so that was a bonus! I deployed with all my cavalry on my right flank, intending to refuse the other as long as possible while I smashed his left. I expected him to advance, form shield wall against my cavalry and envelope me on my weak left flank, thereby crushing my plan, but, for whatever reason, he didn't. Seeing my massed large cavalry units, he moved an infantry unit from his right to his left to support it. This was his undoing, as, although his Gedriht mashed my foederate foot like they weren't there, my pedes broke the unit of Geoguth they were facing and, chasing them down, smashed into the flank of the marching reinforcements, breaking them in one turn! While this wa sharpening, my bucellarii, despite flunking two charges, did massive execution in their second combat round to break the Duguth facing them and threaten the flank of the Saxon horse who were valiantly battling my German nobles, the Huns having seen off the skirmishing Saxon cavalry with a volley of arrows and a well-timed charge. In the end though, it all came down to who got strategic advantage in the final turn. If George won that, his Gedriht would have flanked and slaughtered my bucellarii...if I got it, I'd be home and dry. My extra SIPs saved the day here and the game went to me, as my Pedes were firmly settled in George's deployment zone and my cavalry were soon to arrive there, as the Saxon horse were unlikely to last another turn.

This game made me think about the lists. They are generally good, I think, but there may be an argument for slightly increasing the cost of armour for some units - notably those non-noble units who can get them from Roman fabricae, etc, as armour certainly makes a difference (as it should) in combat. I'm going to look again at the lists and possibly submit some suggestions to Rob Broom about that.

Anyway, it was a fun day - everyone seemed to think so and reported it as such, so we must be doing something right! Huge thanks to all who travelled so far to come along, especially Rob who drove from Bristol to be there for 9.00am! 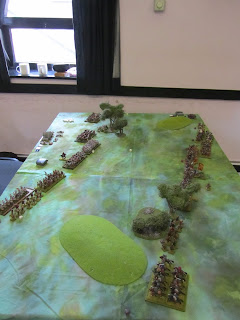 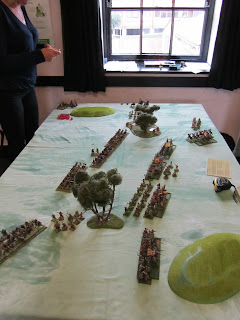 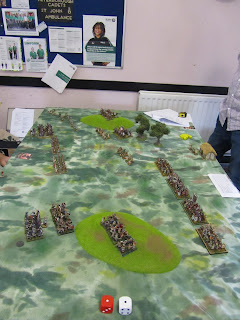 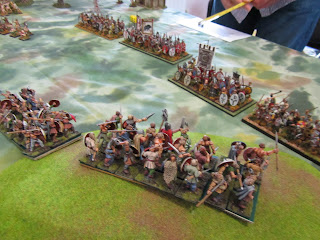 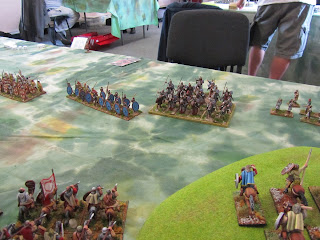 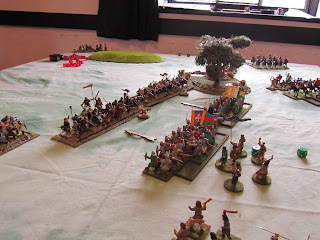