Well, it's been a busy old week. Painting has occurred, but I haven't finished those Andalusian archers yet - shame, as it was excellent weather for photography this evening.

However, there is less need to rush through the El Cid models, as I took a long read of the Hot Lead scenarios last night and realised that taking an El Cid army would, for me, be incredibly stupid...You see, each scenario pits 1500pts against 1000pts in unbalanced scenarios and while the 1500pt army might have done ok, the 1000pt variant I'd come up with was useless for at least half the scenarios. To be honest, the 1500pt one wasn't great and, as I came last at Cold Steel, I would like to be not last at Hot Lead, so have opted for an Arthurian Welsh army - however, not my usual cavalry-fest, but an infantry based force with Saxon allies (well...I wanted an excuse to field those Franks again and the idea was always that they could sub as Saxons if you ignore the heavy throwing spears on some of them...)

So, I will still be painting El Cid, as I want to complete the army...just not quite as frantically as I would otherwise have been!!!! I do need to mount the Saxon/Frank character on a round base and finish half a dozen new Welsh Teulu, so that's what'll take my time this week and next, then it'll be back to the El Cid, I promise!!!!

Bretwalda update tomorrow night, all being well....
Posted by GuitarheroAndy at 11:46 1 comment:

Just a quick post to let you know that I am still alive and kicking...still deaf after the eardrum perforating incident, but otherwise back to full health.

Managed to take a few quick snaps tonight of the Christian cavalry from my 1500pt Age of El Cid Christian army. I hope to take a few tomorrow in slightly better light - it was quite late when I took these, having spent the afternoon babysitting my son while his mum went shopping with her friend....

Basically, at 1500pts, the army is designed to be an army from the time of Sancho Ramirez of Aragon, so somewhere around 1060AD (I intend taking it to Gripping Beast's Hot Lead event and armies have to fit the 400AD - 1066 timeline).

It has an Infante General (yeah, I know he's crap, but I can't fit in a Rey with the troops I want!!) and an Armiger ASB. It has 10 Caballeros Hidalgos representing the household knights who have taken to using French styles of fighting, so they are tooled up with thrusting spears, heavy armour and warhorses. It then has 9 caballeros, representing Aragonese nobles who still fight in the traditional style, fully equipped with light armour, javelins and shield. These are supported by 9 Jinetes who are fully armed with javelins, thowing spears and shields. This is enough points for the 50% core allocation, so the remaining Christian troops consist of 20 peones with thrsuting spear and 11 arqueros (archers). These are then supported by Andalusian allies: a unit of 9 Andalusian jinetes, armed as their Christian counterparts and 10 Andalusian archers (because they are cheap as chips!!

I have no idea how it'll perform in the scenarios on the day, especially as I have to create a 1000pt version as well....

Anyway, I have posted pics of knights before, but here is what I took tonight and they are now arrayed as they will be in the units in the army. I'll try to do a couple of pics of the arqueros tomorrow if I get them based tonight.

First, the Infante and armiger with the Caballeros Hidalgos: 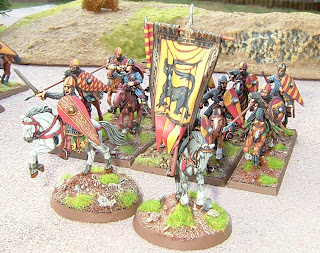 Next, a couple of pics of the Caballeros Hidalgos. Note that I used only models with couched spears in this unit to differentiate them from the Caballeros who are all 'overarm' spear models. 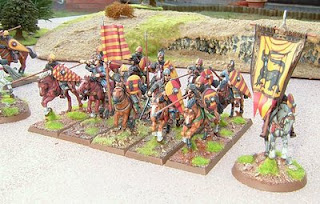 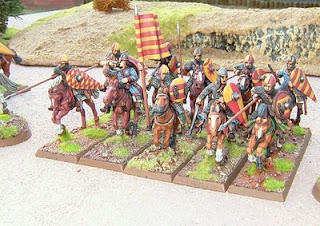 Next, the Caballeros, who, as I mentioned above, are all 'spear overam': 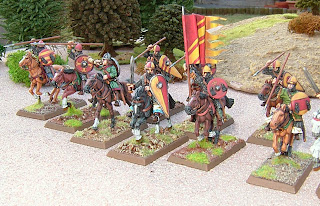 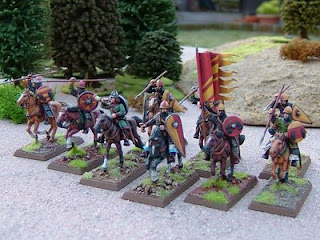 Next, the Jinetes. No standard with these guys, as they always operate in skirmish formation... I also tried to keep the shields very simple and also kept tunic decoration to a minimum to suggest less wealth with these guys. 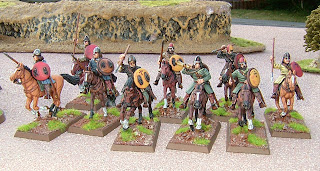 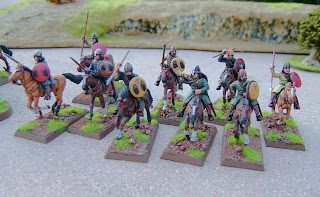 Now, a rather poor shot of all the Christian cavalry - should have put the flash on!!! I'm about to start painting the Andalusian archers. Hopefully, they'll take me no more than a week, leaving me about 6 weeks to paint the Andalusian jinetes and then the peones. It'll be tight, but it's do-able!!! If not, I'll have to sub some Arthurian spearmen as the peones for the event!!!

Andy
Posted by GuitarheroAndy at 13:51 4 comments:

Hi All
For those awaiting news of Bretwalda Round 4 or indeed some newly painted figs, apologies. I have been laid low for the past couple of weeks with, first, a stinking cold, next, a throat infection, and now, (hopefully finally) an ear infection which has resulted in a perforated eardrum (OUCH!!!!!). Consequently, all is not well chez GeetarheroAndy!!! :-(

As a result, Round 4 of our Bretwalda Arthurian campaign will take place in two weeks time, and, once the dizziness resulting from the mangled eardrum has subsided, painting of my El Cid Christian jinetes will commence, as I am determined to get 1500pts of 'em onto the table , hopefully by July for the 'Hot Lead' gaming day at Gripping Beast - a tall order when you consider that I still have to paint about 30 infantry and 16 cavalry!!!!

Andy
Posted by GuitarheroAndy at 05:41 5 comments: