A bit of  change of theme today. Here is the first model in my Mythic Greek force. This is the Kickstarter exclusive Helen of Troy model from Crocodile Games, for their Wargods of Olympus range. My whole force will be built from their Athenians that I bought in the Kickstarter.
This model will be part of a Heavy Foot unit with one of the magic-user options. I'm currently painting the Oracle model to go with Helen and have 6 Hoplites undercoated ready to join her.
This model was a real test of my technique (mid-tone base coats over a light undercoat, Army painter Strong Tone dip, Dullcote, highlight with original mid-tone and light tones) as it's difficult getting female flesh right without extensive blending, which I don't do. Still, I'm pleased with how she turned out... The close-ups don't really do her face justice - she looks far more beautiful when the camera isn't on macro setting!! 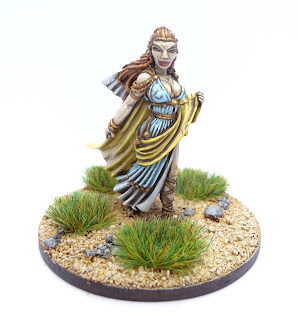 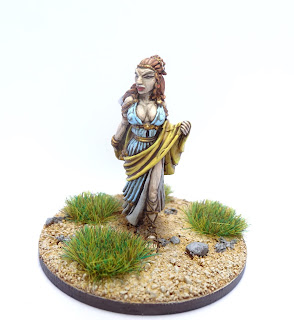 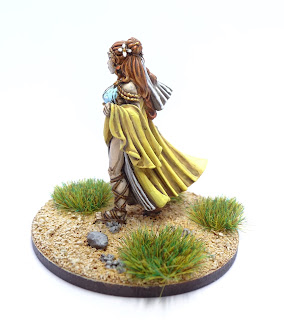 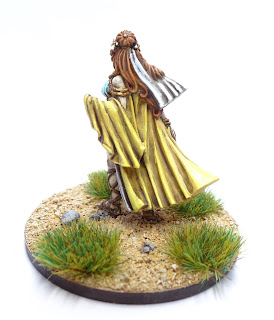 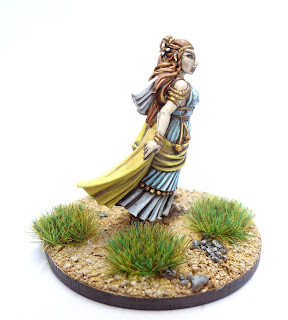 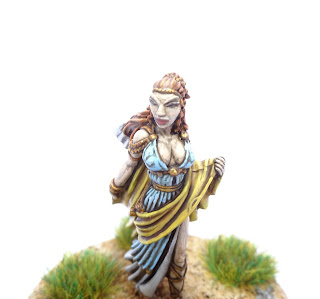 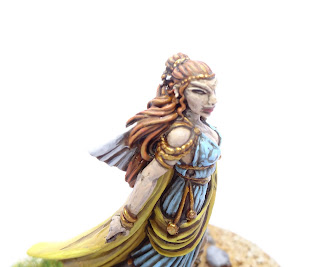 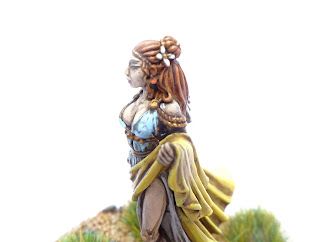 Posted by GuitarheroAndy at 05:36 No comments:

Another unit completed for the (fictional) Raja of Rhanipur's army for my Indian Mutiny project. This is a unit of citizen matchlock men. The figures are by Mutineer Miniatures. I kept up the colour scheme from the Baluchis I previously posted, so yellow, purple and pale blue are the theme colours. In reality, these men would have worn civilian native dress, but keeping the theme colours on them keeps the force looking cohesive on the table top as well as adding that splash of Hollywood technicolour that I'm so fond of.
Next up, the first company of HM 95th foot... 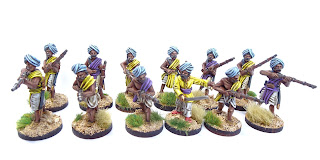 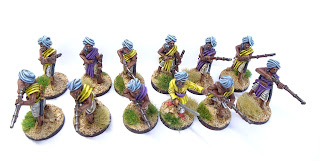 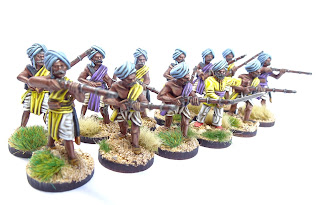 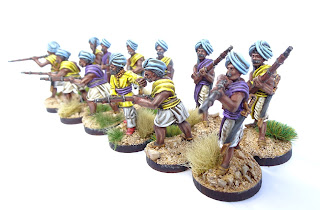 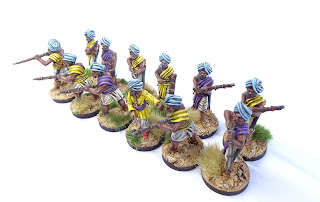 Posted by GuitarheroAndy at 02:37 No comments:

Labels: Colonials, Indian Mutiny, Painting, The Men Who Would Be Kings

Here is the first unit for the Indian Mutiny rebel forces. These are Mercenary Baluchi tribesmen serving in the Raja of Rhanipur's private army in his Baluchi Battalion. They are Foundry models from the Darkest Africa range. They'll be Irregular Infantry, with antiquated musket (matchlocks) and poor shots (representing low rate of fire) but I'll upgrade their fighting stat to 5+ due to the fact that the Baluchis were fierce raiders and these models have huge and hulking great tulwars and little bucklers. They'll not be a lot of use against British/Company regulars in open battle, but they'll be tougher to shift if holding a prepared position in any scenario where the British/Company are attacking.

I wanted the three units of the Raja's personal army to be quite brightly uniformed to contrast with the mass of sepoy rebels who'll mostly be clad in off-white, so I chose yellow, purple and pale blue as they are pleasing enough together. However, I had no idea how bloody awful Foundry Bright Yellow is as a colour. It went on ok as a base coat over the white undercoat, but didn't take the dip wash well and was a nightmare to highlight due to low pigment strength. Still, after a huge battle, I managed to get them to look half-decent, so they'll do. They look ok at table-top distance and the bright colours will look good on a big 6x6 table if and when we take this project to a wargame show. 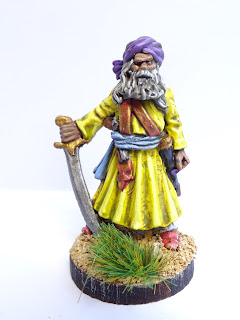 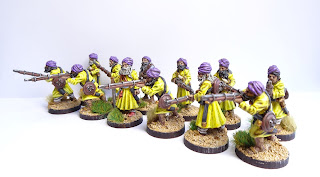 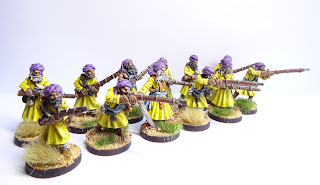 Posted by GuitarheroAndy at 05:06 No comments:

Labels: Colonials, Indian Mutiny, Painting, The Men Who Would Be Kings

Well, I'm stuck in for a week all on my own-some with a temperature and a bit of a cough (joy!) and as it's all pretty mild thus far, I've been busy painting. I needed a break from chopping up Plastics for Elves and I've been reading a book on the Indian Mutiny so I dragged my sorry carcass up the loft and got out the Indian Mutiny figures I bought 5 years ago and made a start.
As always with TMWWBK, I have a factual basis for my games but a fictional setting, so I'm obviously in the 1857 Mutiny, but in the fictional campaign to subdue the rebel Raja of Rhanipur (back-story to come later).
The British East India Company force is build around two companies of the 53rd Foot simply because I wanted some troops in red and the picture in the old Osprey book (below) really drew me in. 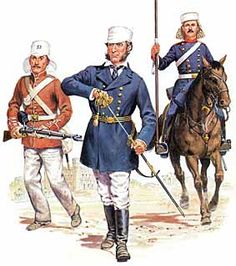 The trickiest bit was that this regiment have red facings on their scarlet tunics so finding the right reds was paramount. Luckily, Foundry Scarlet is perfect for the facings and their Light Red is perfect for the tunics. The lighting has washed out the colour a bit on the pics below but I can assure you the choices are as bang on as you can get.
The models are Mutineer miniatures. Lovely sculpts. The only snag is that the sculptor (Mike Owen?), while brilliant at these advancing poses, is incapable of doing decent firing poses. So the next unit, which is a firing line, aren't quite as good on the pose front, but they'll paint up well enough. The rest of my British EIC force is Iron Duke miniatures which are universally superb, if very slightly smaller than the Mutineer figures.
Anyway, here is the first company of the 53rd Foot. Painting is my usual method that you all know well enough by now. The Army Painter Strong Tone dip is perfect for the Mutiny as it gives everything a slightly 'dirty' feel with these reds and off-whites. 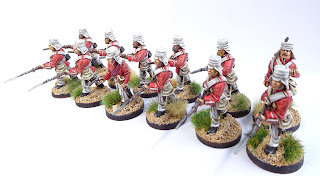 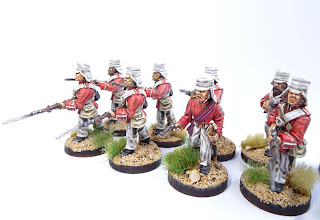 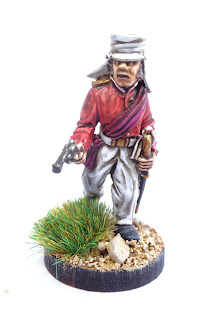 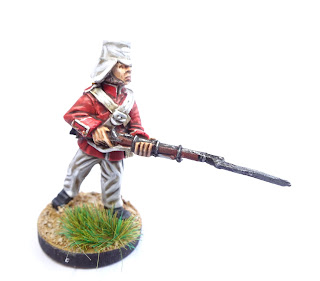 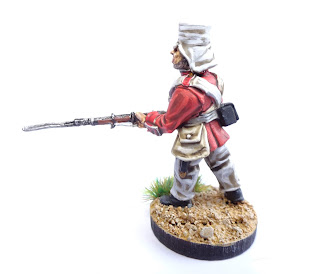 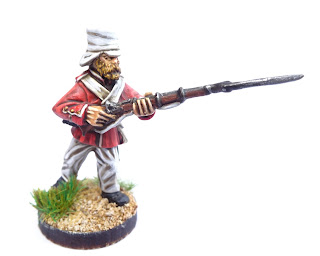 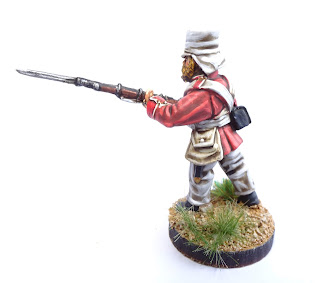 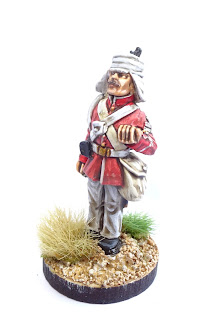 Next up, the Raja of Rhanipur's Baluchi Mercenary Battalion...

Posted by GuitarheroAndy at 07:39 No comments: