Firstly, after my...ahem... 'slight accident' involving the road and a large box of my beautiful Arthurians a month or so ago, I am pleased to report that all bar 4 of the damaged cavalry are now fixed (barring a wee bit of varnish and Dullcote). This is good, as I want to field them in next week's club Kings of War campaign game!! There are still about 25 infantry in need of a few fixes, but nothing as major as the cavalry - mostly just new spears or bows to paint.

Talking of Kings of War, here's my latest model for the Kingdom of Brythonia, a small kingdom near the Mammoth Steppes...and here's their Warbeast, a faffing great mammoth, courtesy of West Wind miniatures (albeit minus its Dwarf crew!) Apologies for cruddy pics...just snapped 'em quickly with the phone. 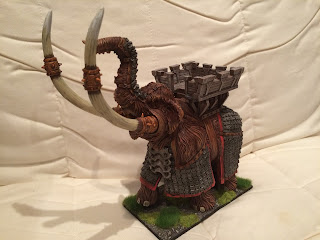 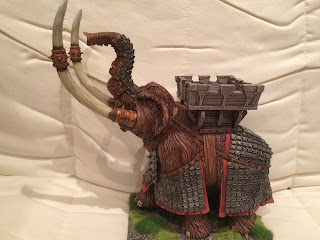 Eventually, this will be crewed by this fella (the one with the mahoosive axe!) from the brilliant Barbaric Splendour Barbarians Kickstarter that I have pledged for. I may also add a few old Grenadier barbarians to the crew as well (I intend to do a barbarian war band for Dragon Rampant, you see, so this will get dual use...) 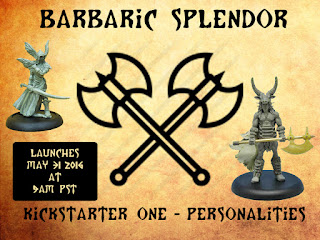 Finally, my good friend Andy MacTaggart and I convened at the club on Monday to do the first play test of the 'Men Who Would Be Kings' game we are taking to Hereward Wargame Show this year. A couple of teaser shots below...as you can see, we have temporarily departed from the NW Frontier in 1897 and have gone back in time 12 years to 1885 in the Sudan! Watch this space for more details as play tests continue!!! 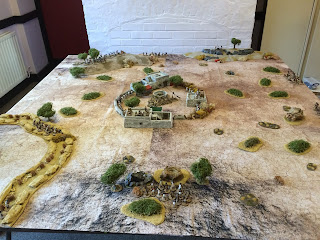 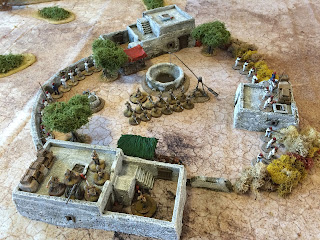 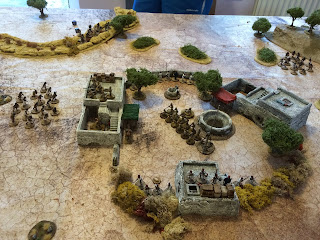 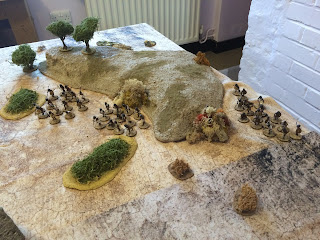 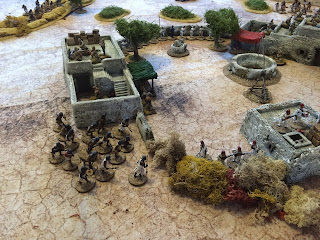 That's all for now. Back next week for a full Kings of War batrep, all being well!! Toodle pip!!!!

Labels: Admin, Arthurians, Colonials, Kings of War, The Men Who Would Be Kings

The Annals of Linnius Chapter 13: Pilgrimage - The Holy Undersmock of St Cuthbert

"Verily, Our Lord has smiled on the kingdom this day! Many are His blessings that shall fall upon those who did fight with such bravery! Surely also, a special place in Heaven doth await those who did die saving St Cuthbert's Holy Undersmock! Oh, glorious day!"

Thus spake Bishop Augustine after a fierce affray on the great West road this day. Rumour of Saex raiders had caused His Holiness to order the transportation of a most holy relic, the Holy Undersmock of St Cuthbert, from it's chapel on the coast of the Northern Sea, to be brought to safety inside Caer Lerion, to the church here.

The Holy Undersmock of St Cuthbert...having already lost the Holy Knucklebone of St Cadwyr to the Saex, 'twas unthinkable that this second and most holy of relics should fall into barbarian hands. It is said that St Cuthbert, while on evangelical duty in the kingdom of the Franks, did suffer capture by a barbarian warlord. After much torture, he did still refuse to deny his faith and so, the warlord did order him thrown from the cliffs into the sea wearing nothing but his undersmock. It is said that Our Lord had not yet finished with St Cuthbert and thus did the Holy Undersmock balloon with air and upon this makeshift float, St Cuthbert was thus taken across the Northern Sea to make landfall on the coast of the kingdom whereupon he did build a small chapel and from whence he did administer to his flock. The undersmock has been kept in the chapel since that day and record of it was made by my father, Municipus Librarius, though, truth to tell, there has been some doubt about the tale. There are those who do state that my father's hand was poor and that his spelling weak. Indeed, the Tribune Andrucius has been heard to mutter that mayhap the Holy Undersmock may not actually be a relic at all and may well be more in need of the attentions of a seamstress... These words must never reach the ears of the Bishop, however...

Anyway, on this day, a small band of monks did escort the Undersmock in its wooden case on the back of a small pony cart, accompanied by Lord Geraint and the milites of the kingdom ready to meet the Tribune and the remainder of the force for the march to Caer Lerion.  However, word must have reached the dreaded Saex, for a vanguard of their hearth guard did approach the convoy, swiftly followed by the remainder of their force.

Quickly, the Lord Geraint did launch a pre-emptive assault on the Saex, but they did withdraw  awaiting further reinforcement.  Luckily, the Tribune had not been tardy in his march and within minutes, had formed shield wall with Geraint, facing down the Saex Lord and his hearth guard  and further warriors who did jointhe formation.

While this face-off did happen, the diminutive Decurio Maximus Minimus did lead the levy to the aid of the convoy. Alas, for all his haste, Maximus did initially fail to reach the convoy before two groups of Saex warriors did slaughter the monks and capture the wagon! They did turn tail to run with the relic, but the diminutive Decurio did move the levy apace, crashing into the rear of the Saex, crushing their formation and recapturing the Holy Undersmock! The Saex did flee in disarray!

At that same moment, the Lord Andrucius did launch a huge assault on the Saex Lord's formation. The fight did swing back and forth, with many men falling to bloodied spear thrust and hacking blade, but truly, Our Lord was with the tribune this day and the assault of the Saex did falter and fail. Licking their wounds, they did withdraw from the field, leaving the tribune to count the cost while Mximus Minimus did bring the Holy Undersmock into Caer Lerion! This is the second time in  as many engagements that the diminutive Decurio did take major part in the victory. A second Garland of Bravery has therefore been awarded to the Decurio for his part in this victory.

This was a play test for the second scenario written by Mike 'Trouble at t'Mill' Whitaker for the upcoming Dux Compendium. As you can see from the words of Publius Librarius above, we approached this game with all of the usual seriousness we bring to these things!! The game played out very well indeed, which is testament to Mike's scenario-writing skills. We needed to tweak some wording along the way, but the basic scenario idea seemed very sound. Somewhat unusually, this game saw me gain an excellent hand of cards including two 'Step Forth' cards that allowed Tribune Andrucius to muscle in ahead of the Saex Lord in two vital combat rounds. Even then, cruddy dice nearly messed it up for me, but I managed to gain the upper hand and, once again, shield wall saved my bacon.

It needs play testing again, but overall, another keeper, methinks! Here are some pics... 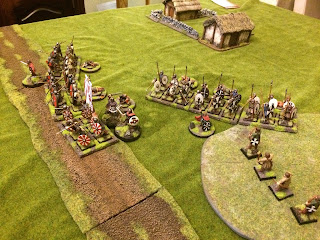 Posted by GuitarheroAndy at 13:41 2 comments: