I am very pleased to be able to announce that I have decided on a brand new project for 2015/16. By that, I mean something to get my teeth into that I might actually finish and that I will actually game (as opposed to all the nice things that I have models for 'cos I like them, but currently  have little chance of gaming, e.g Wars of the Roses, French Indian War).

This will be an Indian Mutiny project for The Men Who Would Be Kings. The aim is to have two sizeable forces completed by the time the rules are officially released in August 2016.

The forces will comprise a mixture of units from Mutineer Miniatures and the upcoming range from Iron Duke Miniatures as sold by Empress Miniatures. This means that I will be able to use models from two of my favourite sculptors, Paul Hicks (whose marvellous Empress British Colonial infantry are the 'Suffolk Regt' in my NW Frontier Games) and Mike Owen.

Using the two ranges means I will get the best of both worlds, as Mike Owen is a master of characterful 'character' models and the 'at the ready' and 'march attack' type poses (although IMHO, his firing poses are never quite right) and Paul seems to just have a fabulous eye for great poses - his 'firing pose' figures are superb (check out my 'Suffolks' for proof of that) and he also produces some great models in other poses too. Check out the (currently small) gallery on the Iron Duke website here for initial releases in the range. Also, check out the workbench here...those Sikhs!!! Wow!!

The 'backstory' for my forces is a British Field Force attempting to overthrow the Rani of Rhanjipur (a fictional personage and locality not so loosely based on the real Rani of Jhansi in the Mutiny...look her up) in late 1857/early 1858. This means that all my British troops can be armed with the Enfield Rifle and, as the campaign starts in the 'cold season', I can have a wide range of uniform colours for the Brits, including at least one red coated unit (whereas a summer campaign would see them all in white/dyed various early khaki shades). The story is that rebel fugitives from Delhi have persuaded the (hitherto undecided) garrison regiments in Rhanjipur to rebel. The rebellious Sepoys look to the Rhani for leadership, as they know that she harbours a deep dislike of the British as she has been ill-treated by them since the demise of her husband and, being a woman of remarkable temper and blessed with the personality of command, she is a natural choice to lead...

I have been interested in this period since I was a teenager but have never been able to find a reason to game it. TMWWBK is giving me an excellent excuse to finally put together the forces and have a bash and these new ranges are 'the dog's flopsy bits!!!' (err...that means they area a 'bit good' for those of you to whom English is not a first language or to whom such imagery is unfamiliar!!)

The first order has just gone to Mutineer Miniatures for a bunch of rebellious Sepoys, The Rani and friends and a few of her own private army of matchlock men...

Exciting times!! I will also continue to work on the later Colonials as I still need to get more stuff on the table for that. British artillery and more Pathan Swordsmen will hopefully be complete early next week if not before...

Posted by GuitarheroAndy at 12:31 3 comments:

Labels: Colonials, Future Plans, Indian Mutiny, The Men Who Would Be Kings

Since my last post, we have put in a fair few hours on The Men Who Would Be Kings play tests. We have tried another couple of scenarios, one involving the defence of a static object (we chose a waterhole) and the other a 'remnants of a defeated force retreating to safety' scenario (Maiwand, anyone?)

Once again, we found that the main rule mechanisms enabled us to have extremely enjoyable games. In both scenarios, we tweaked the abilities of the Ghazis to better suit their role on the NW Frontier - a great feature of the rules being that players are encouraged to use their 'theatre-specific' knowledge to help to customise their forces appropriately. In all games, we have found that rolling for unit leadership traits has added some good 'colour' to the games without completely b*ggering up the scenario or spoiling anyone's fun (even if the roll leads to dodgy traits, it all seems to add to the fun factor.)

Thus far, we are finding that the scenarios are balancing the forces quite well, although the Pathans are thus far ahead in their victories - the British have only won one of the play test games and that by virtue of the fact that they were actually able to deploy into a proper line and shoot the living daylights out of the enemy. Having said that, in most other games, the Pathans have suffered heavily in their victories, which feels about right!

Overall, we love these rules. They are good fun and give a lot of 'cinematic period feel'. A minor handful of folk following my progress on the Lead Adventure Forum (I have posted bat reps there) have muttered about a few things, but in general, they seem to be players who probably either moan about every set of rules and just enjoy being negative or are the sort of players who prefer a more 'historical simulation' type of rule set. I personally think that anyone who enjoys a fun evening's gaming with well thought-out scenarios, excellent 'feel' for the period and a hefty does of humour will love TMWWBK when it comes out next year. Players who approach things in an overly 'serious' manner or who like 'nit-picky' rule systems may wish to look elsewhere...

Here are a few pics from the recent games...

The 'Defend the Waterhole' scenario: (Full report here.) Essentially, the Sikhs held the waterhole for most of the game before being shot down by Pathan sharpshooters. The Pathan swordsmen shot their bolt too early and were cut down by massed gunnery from the Brits and Gurkhas. In the end, the Pathans were unable to achieve their objective ion the face of the British fire. 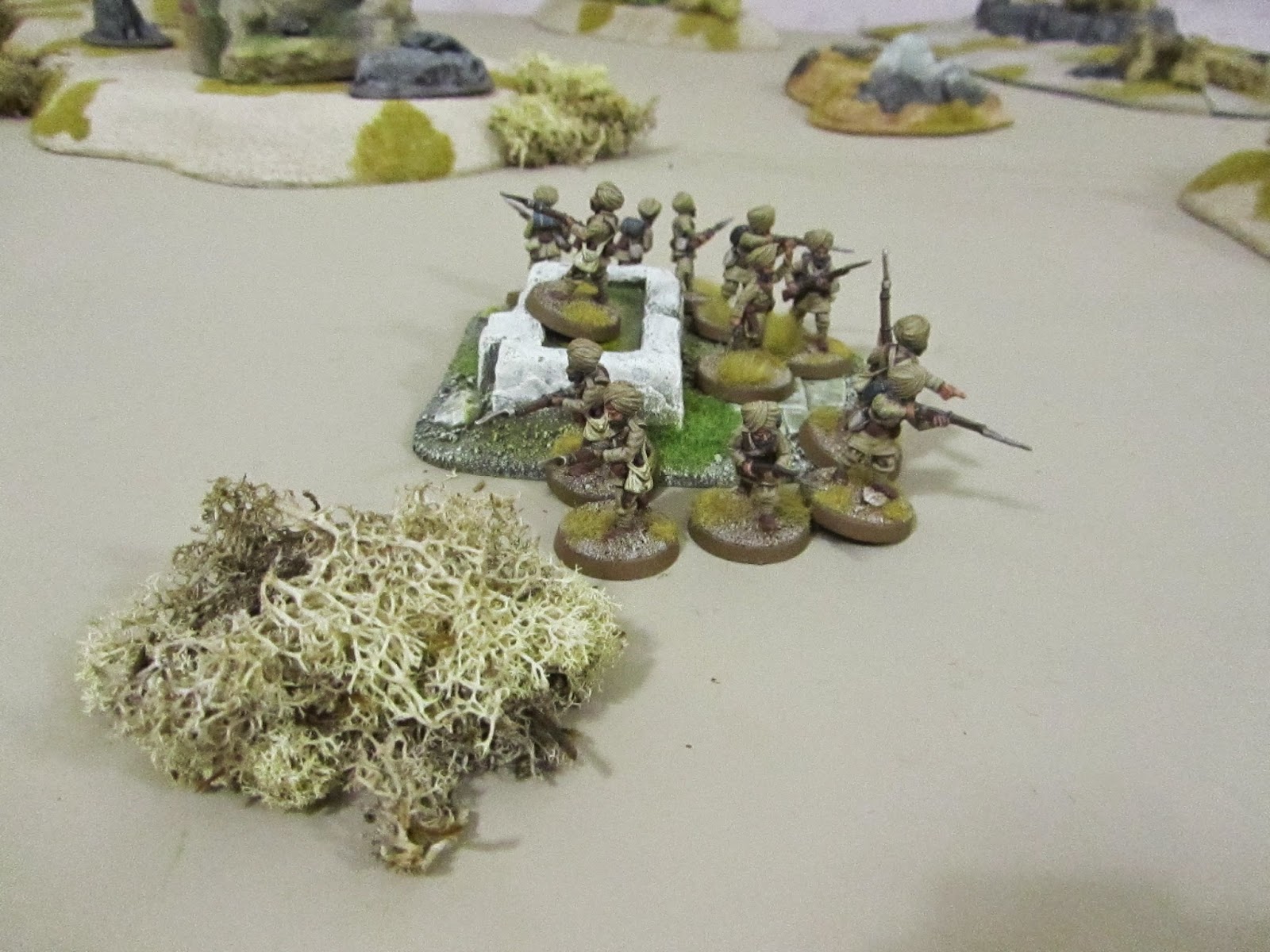 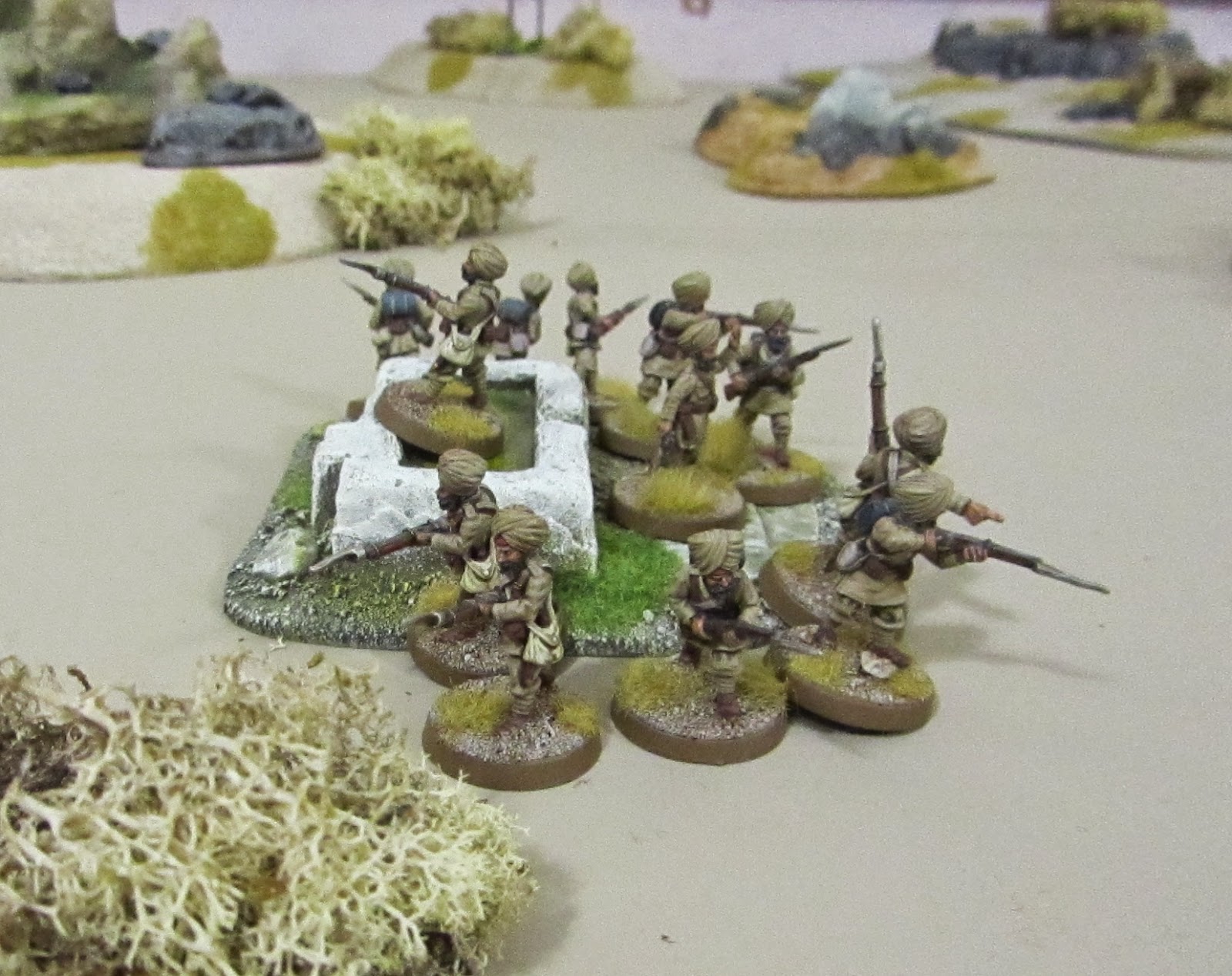 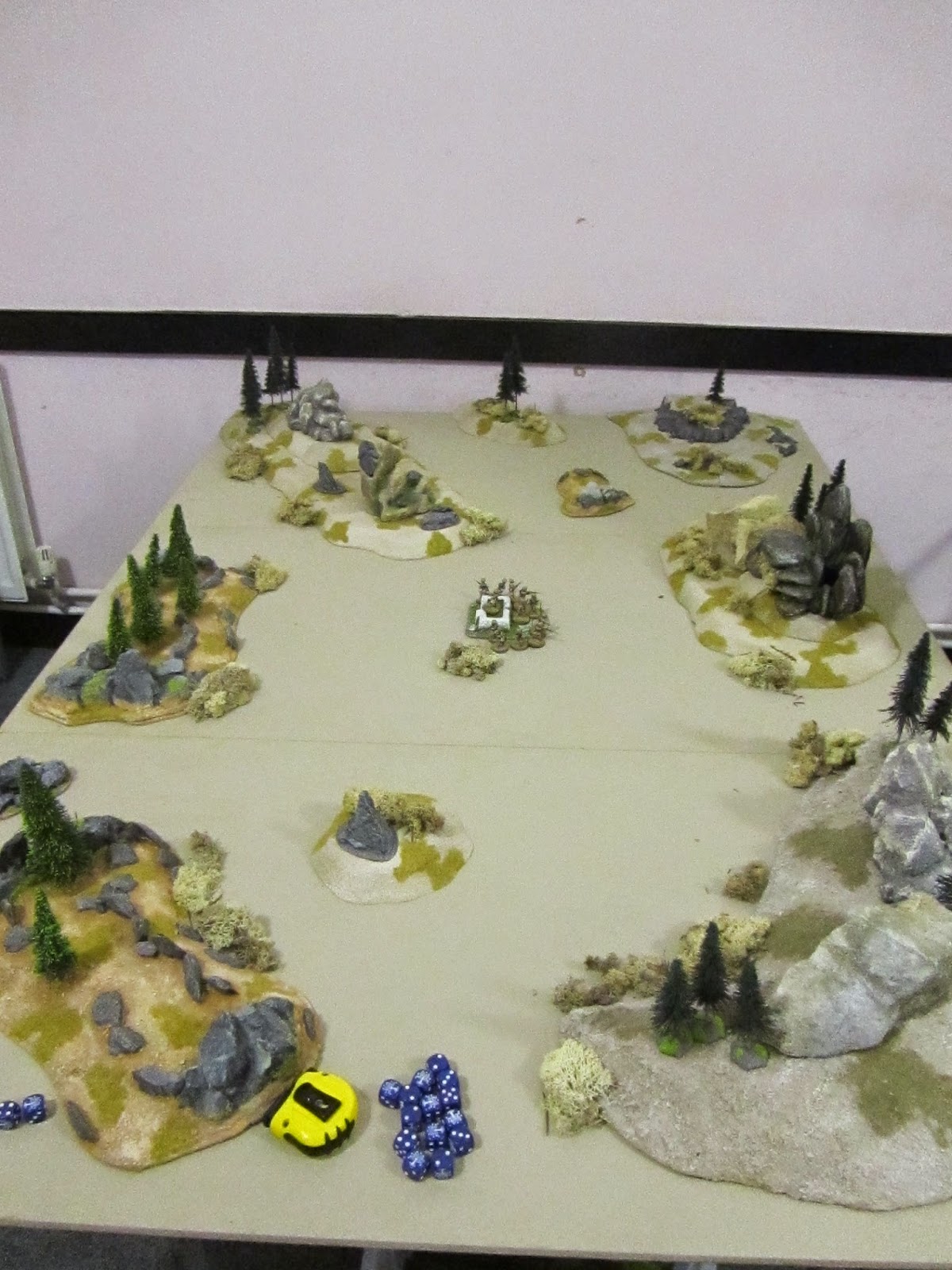 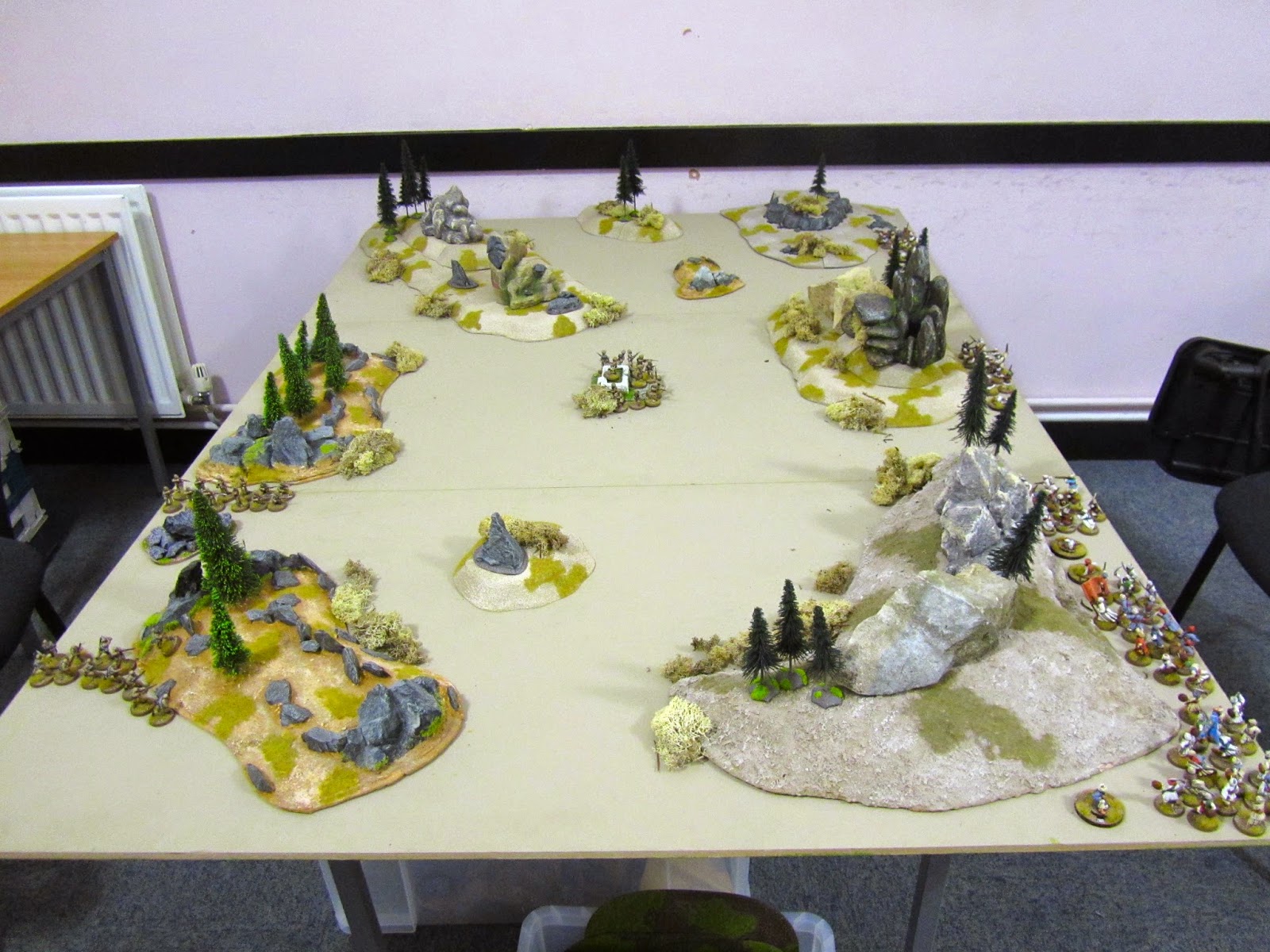 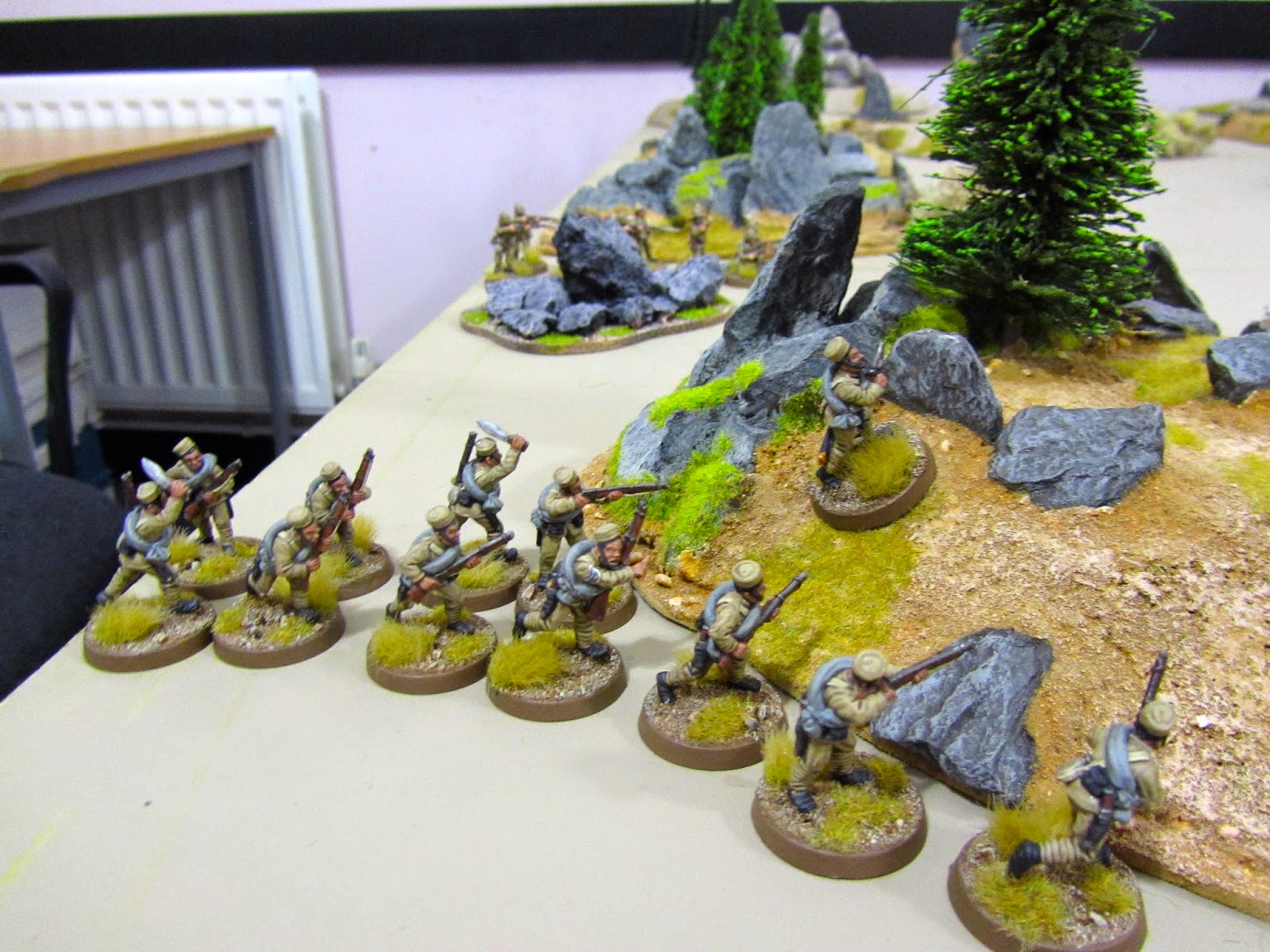 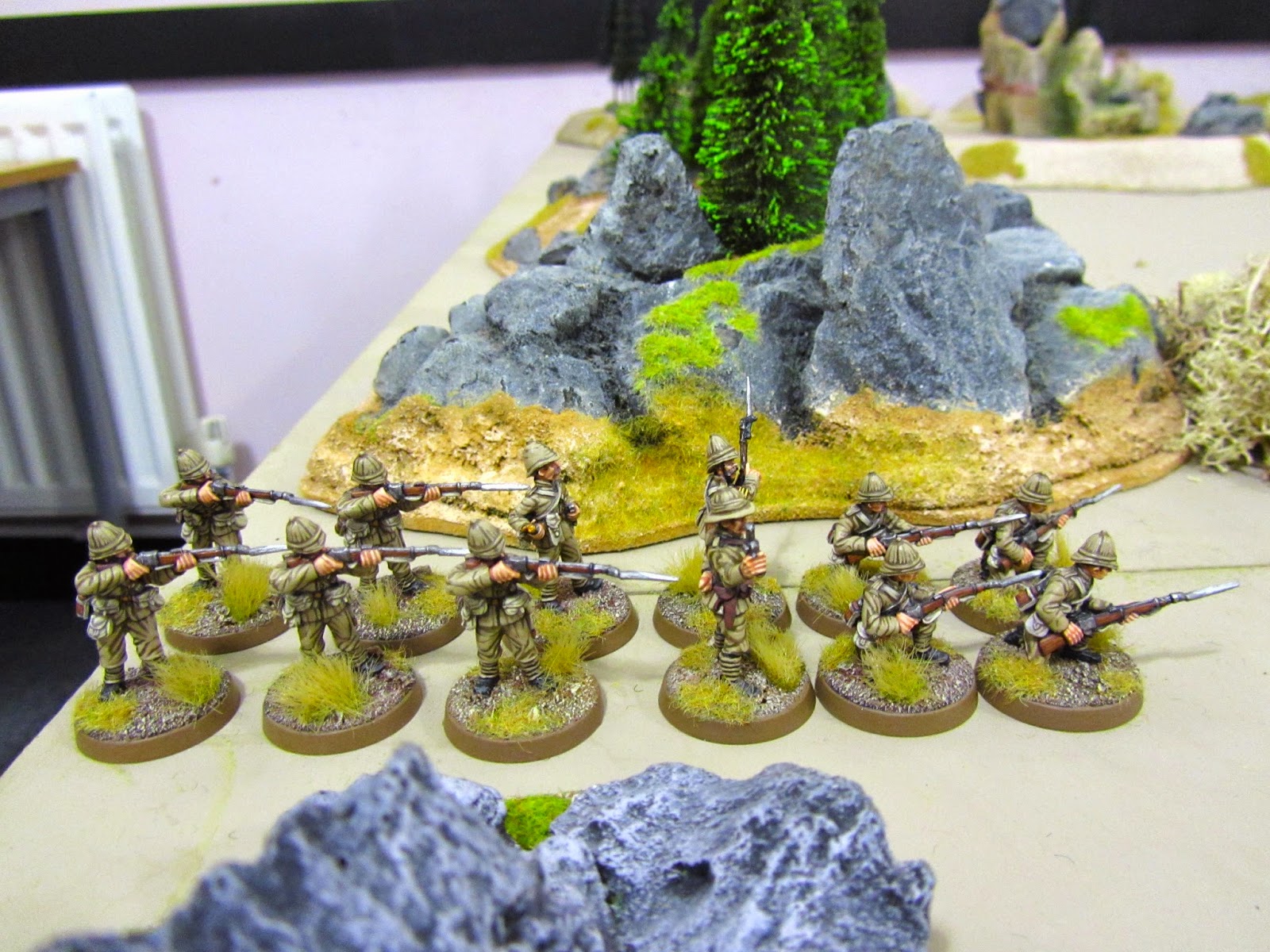 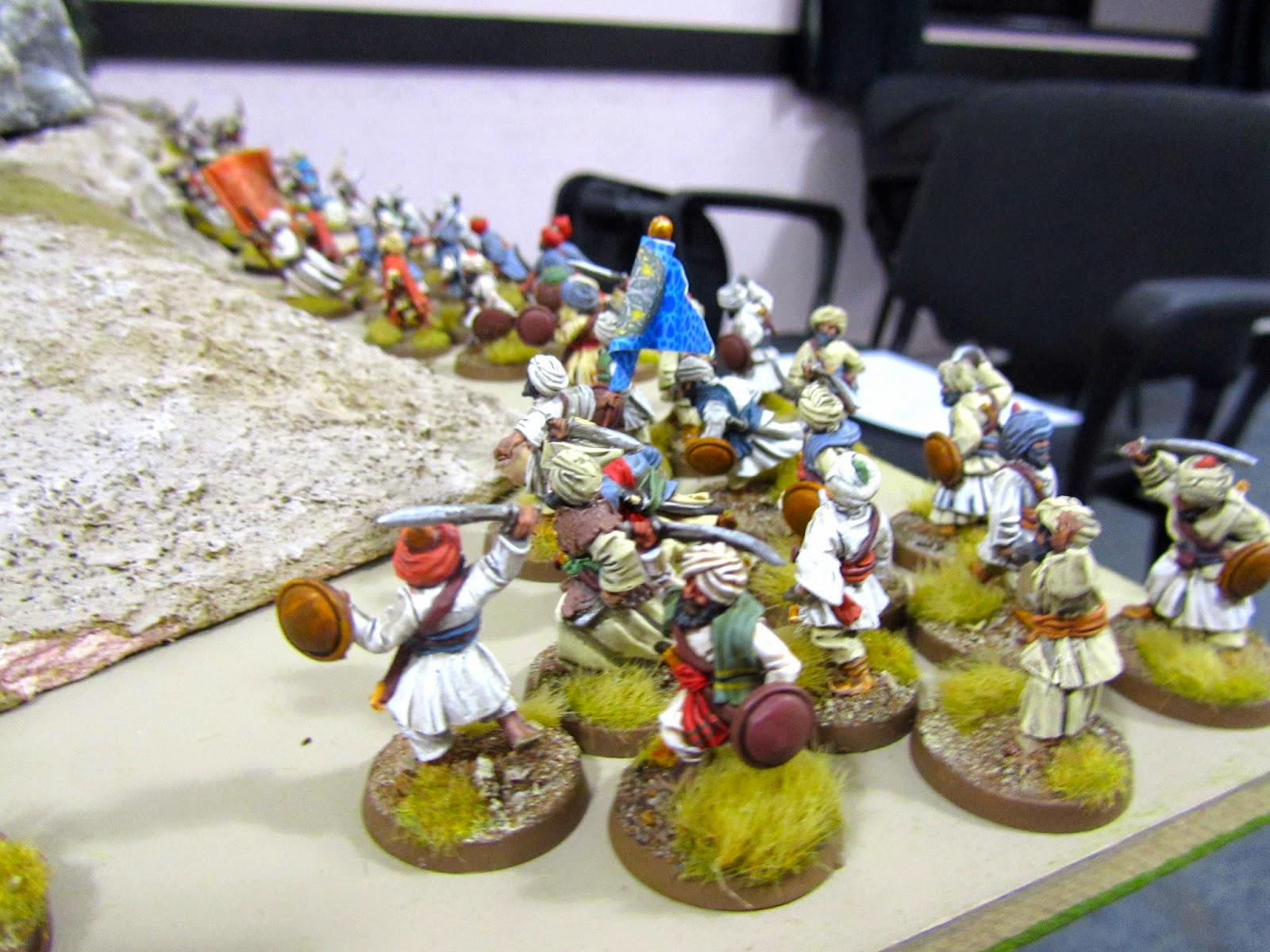 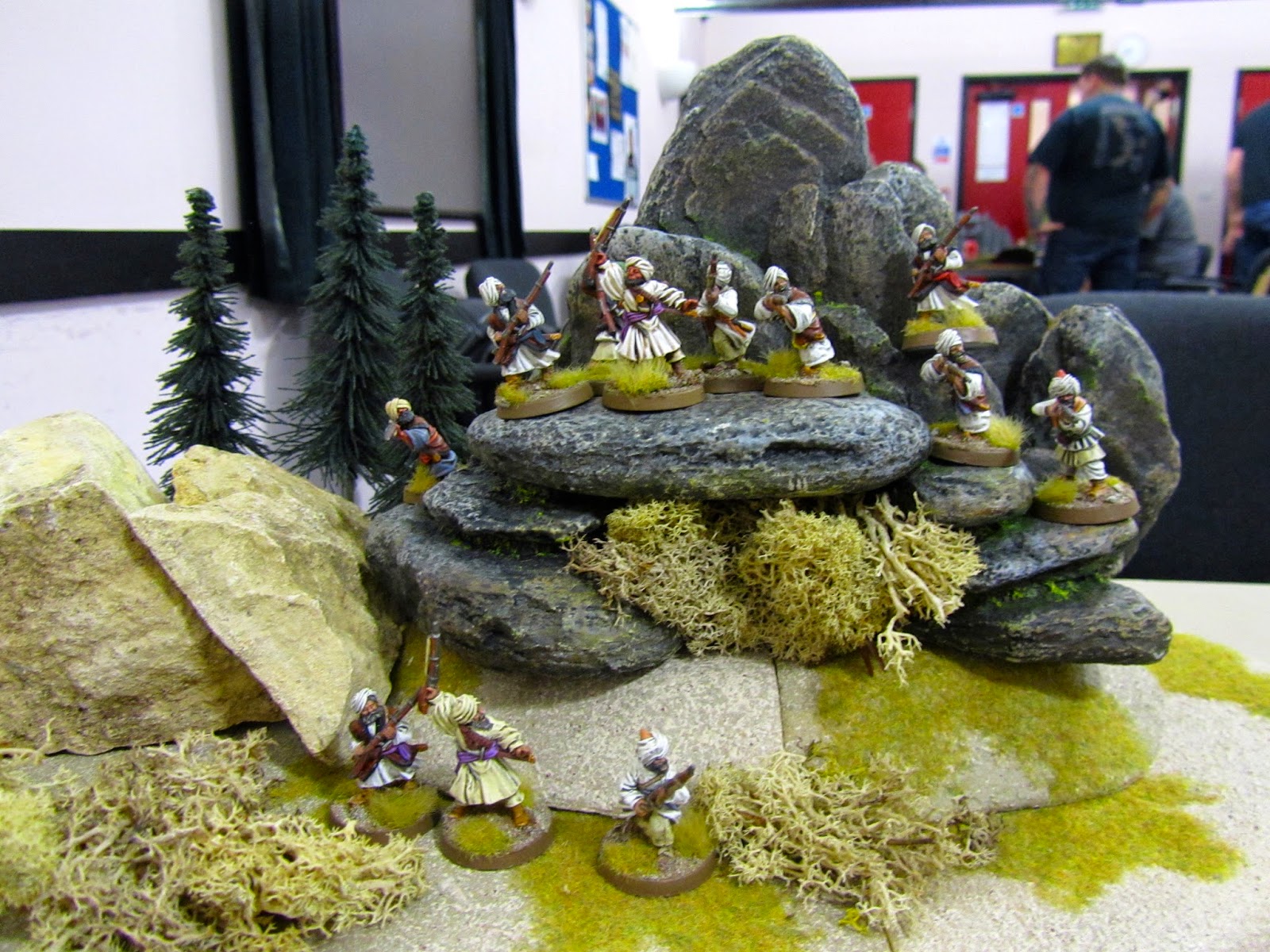 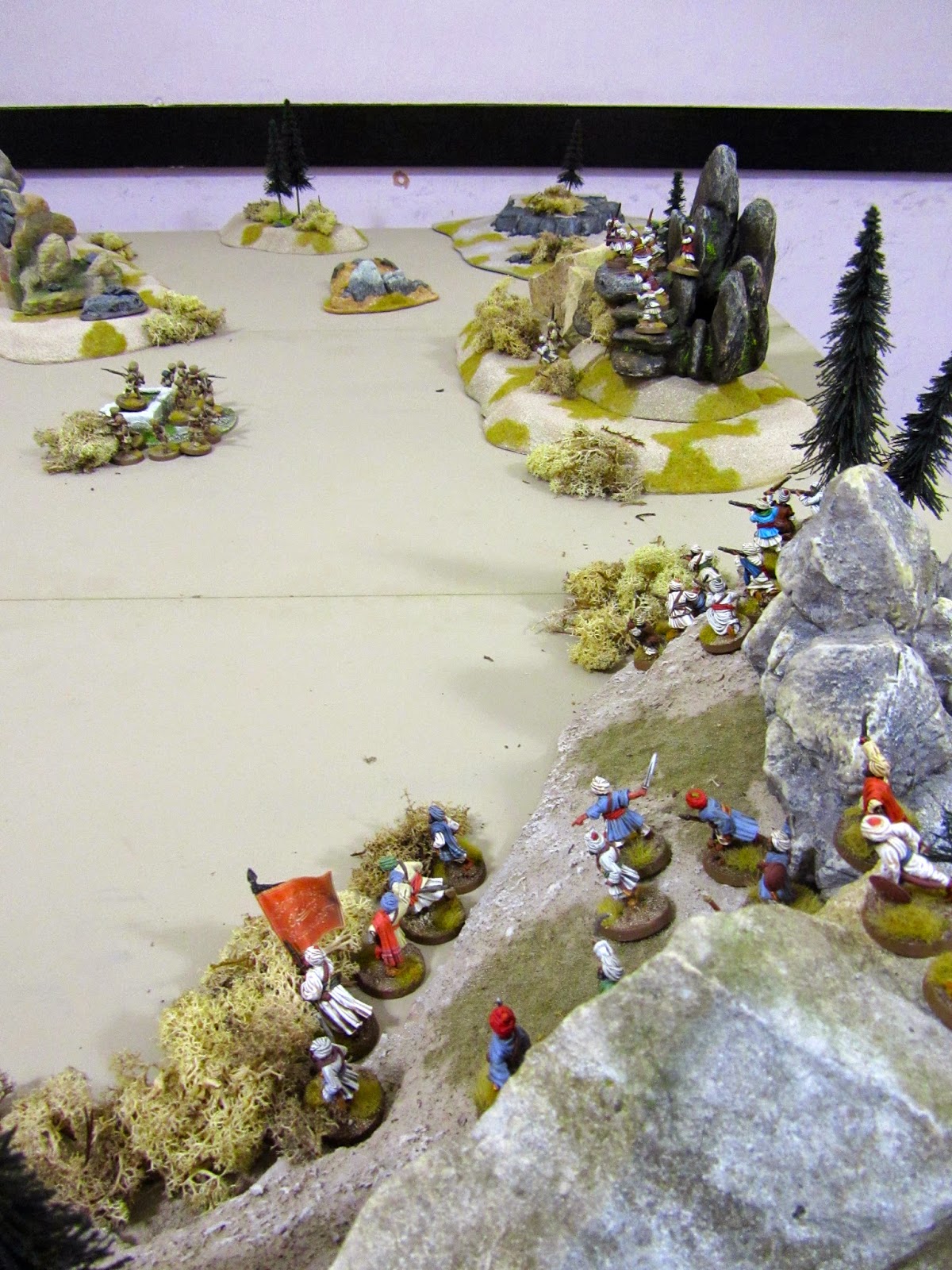 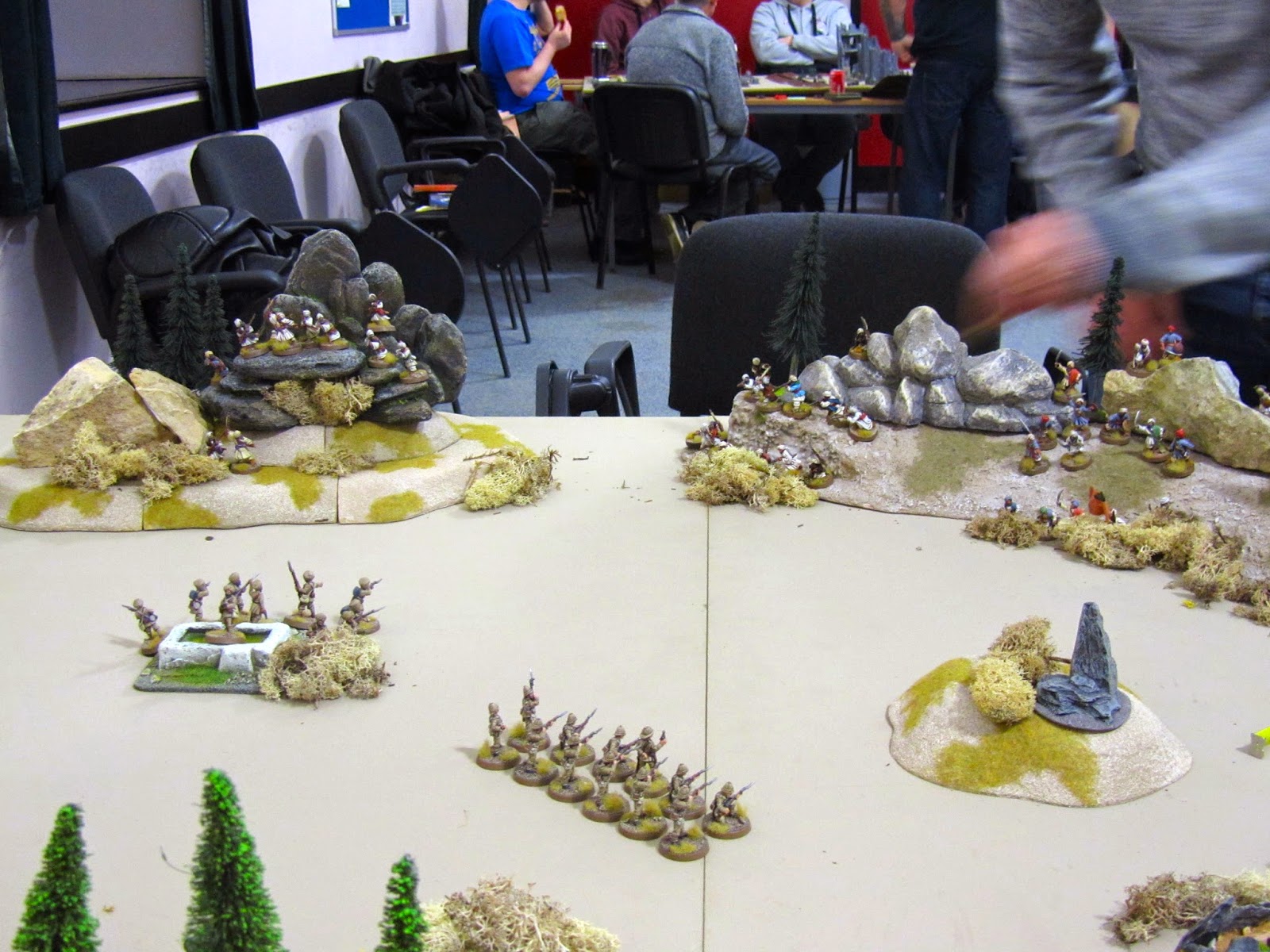 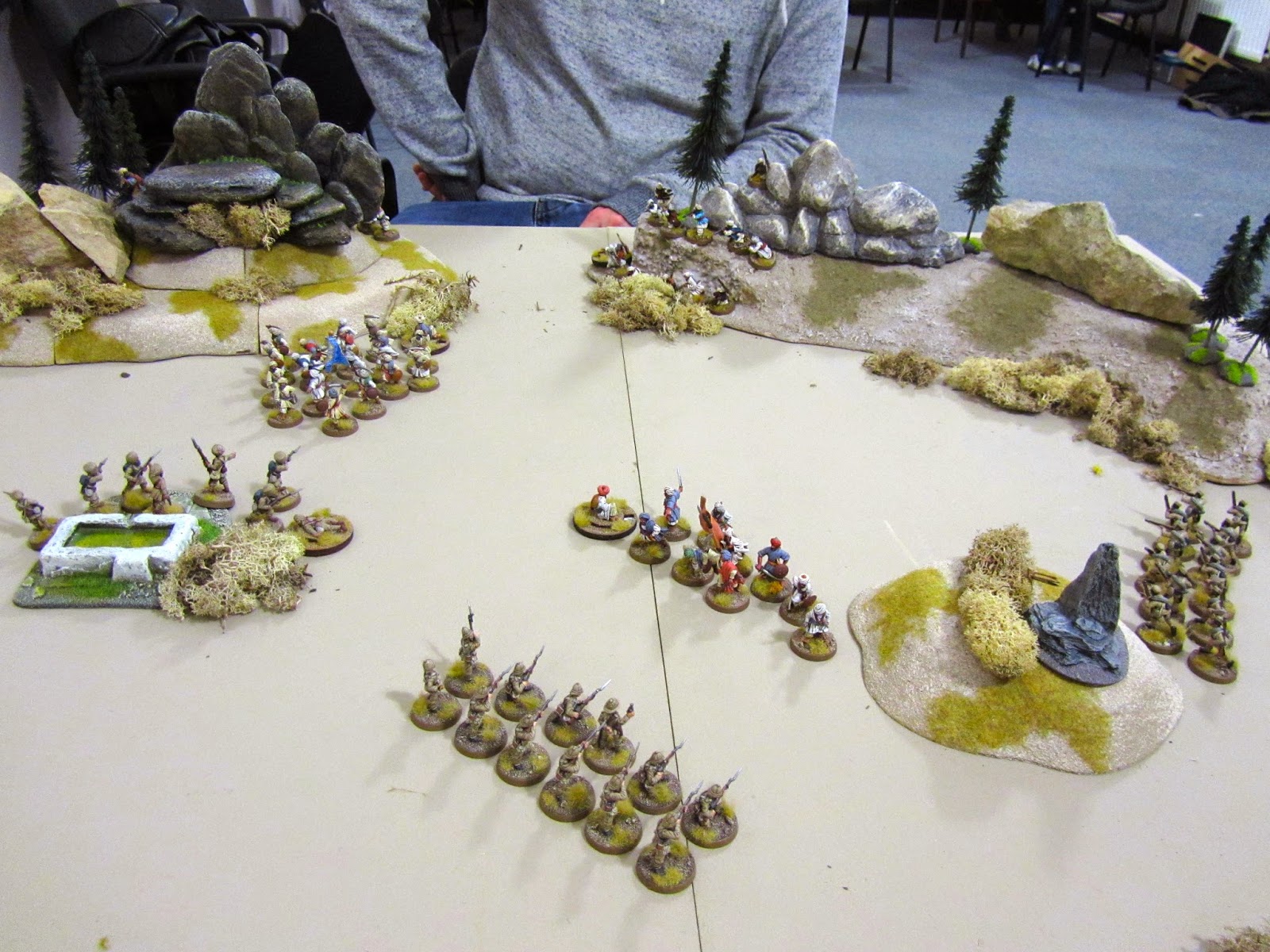 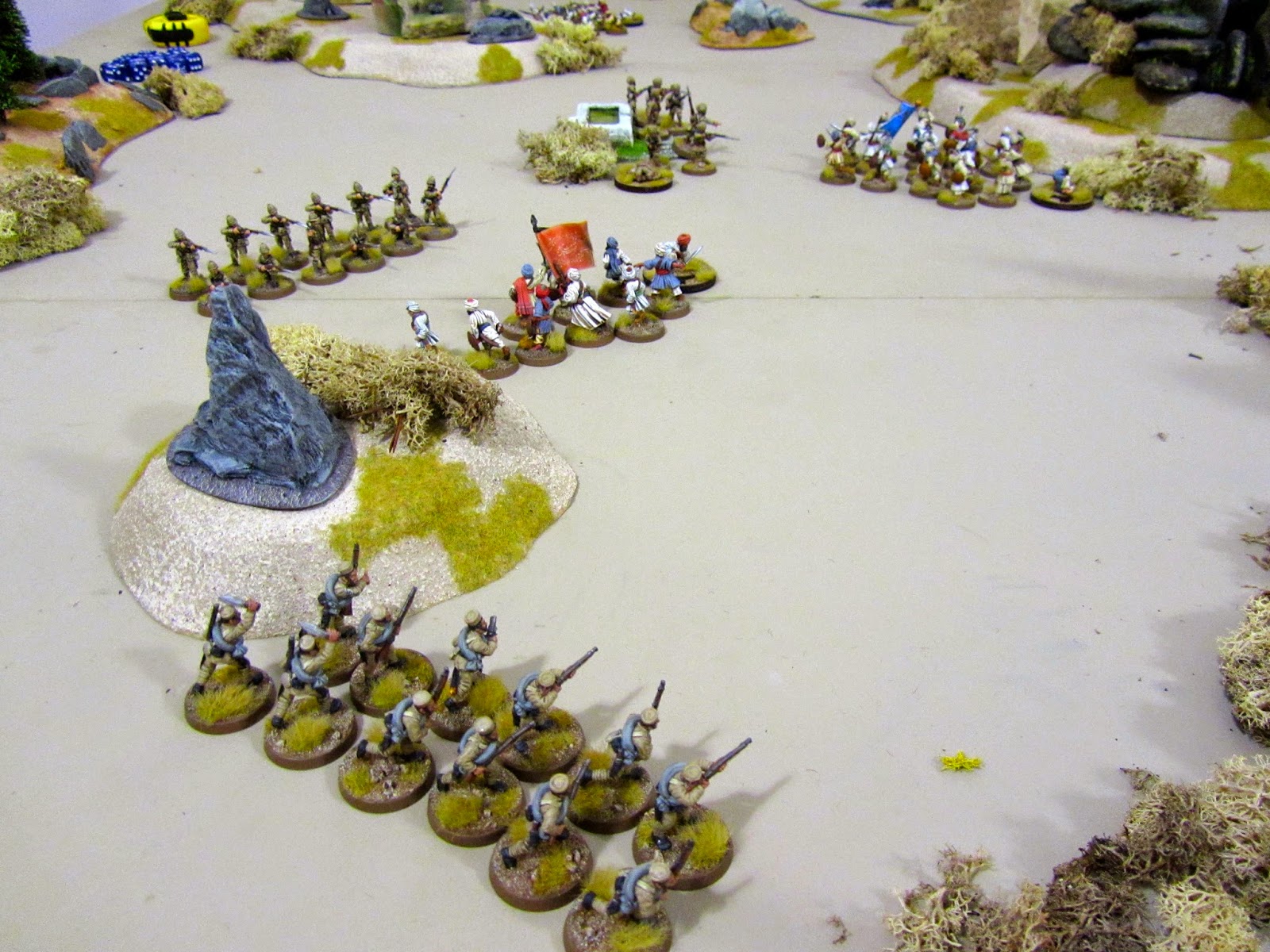 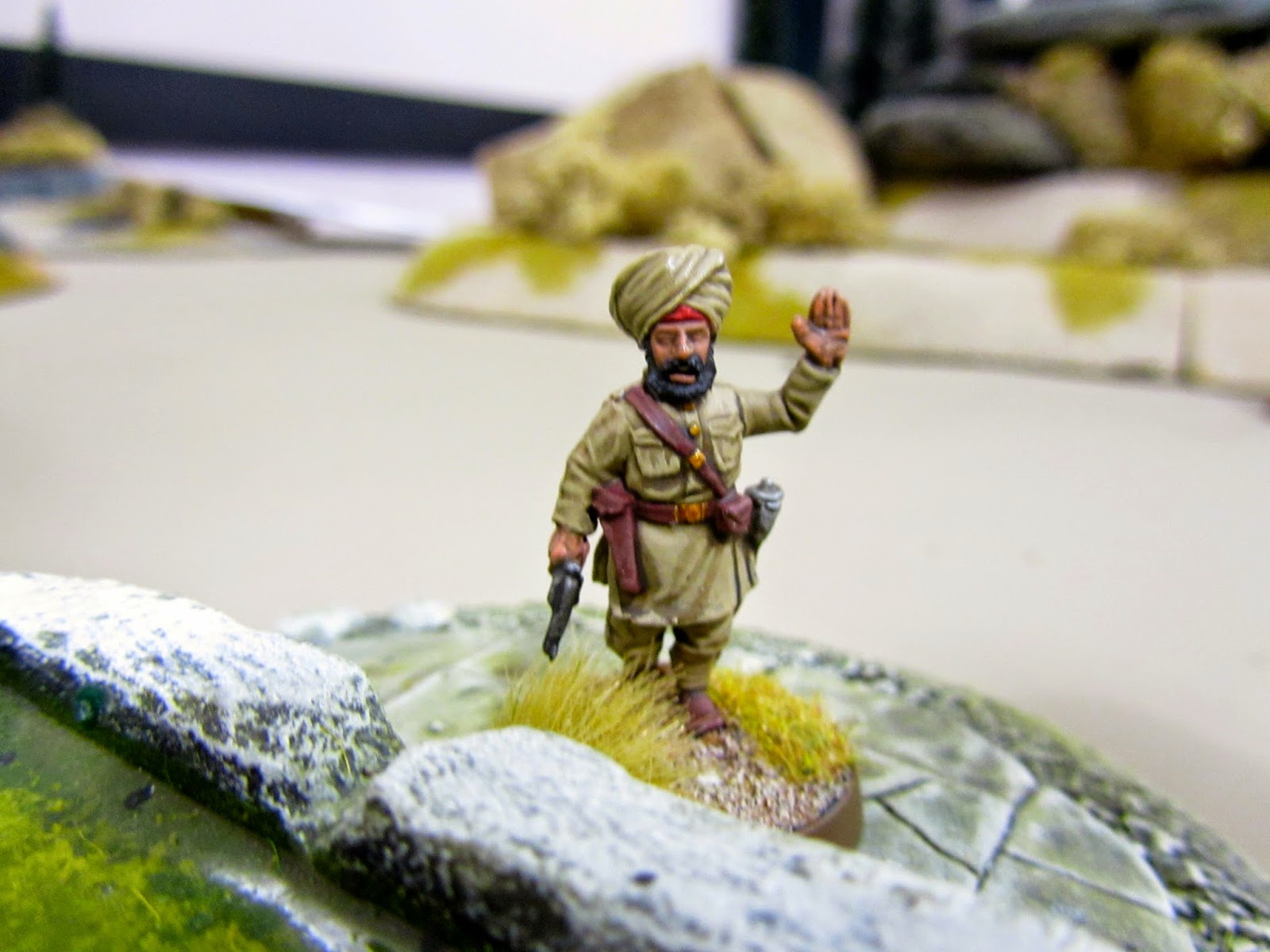 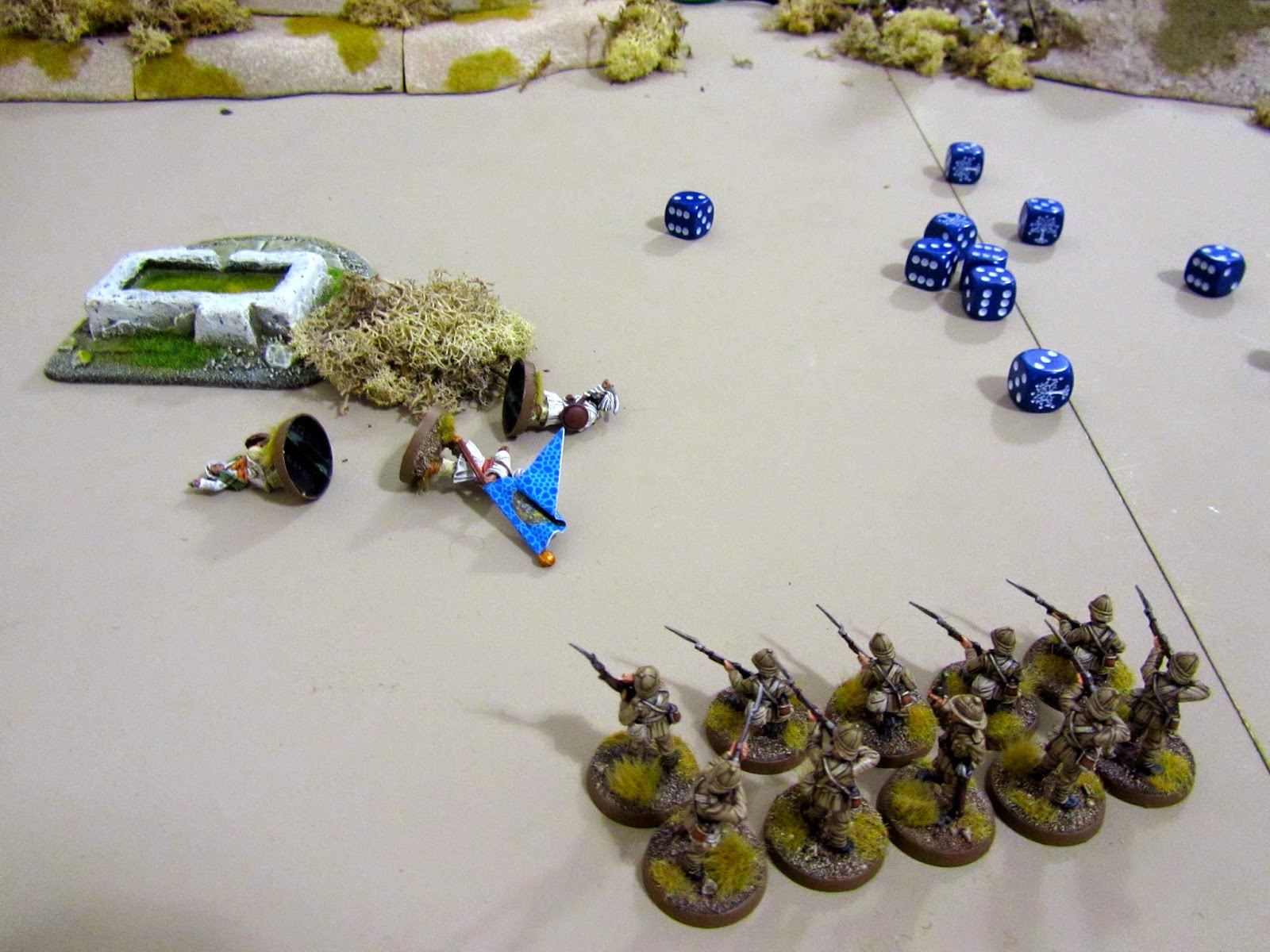 Retreat from Maiwand. (Full report here.) In this game, the Pathans out-generalled the Brits, by slowing them down with relentless sniping, finally over-running the remnants with swordsmen, although the Gurkhas stubbornly held out and inflicted heavy casualties. 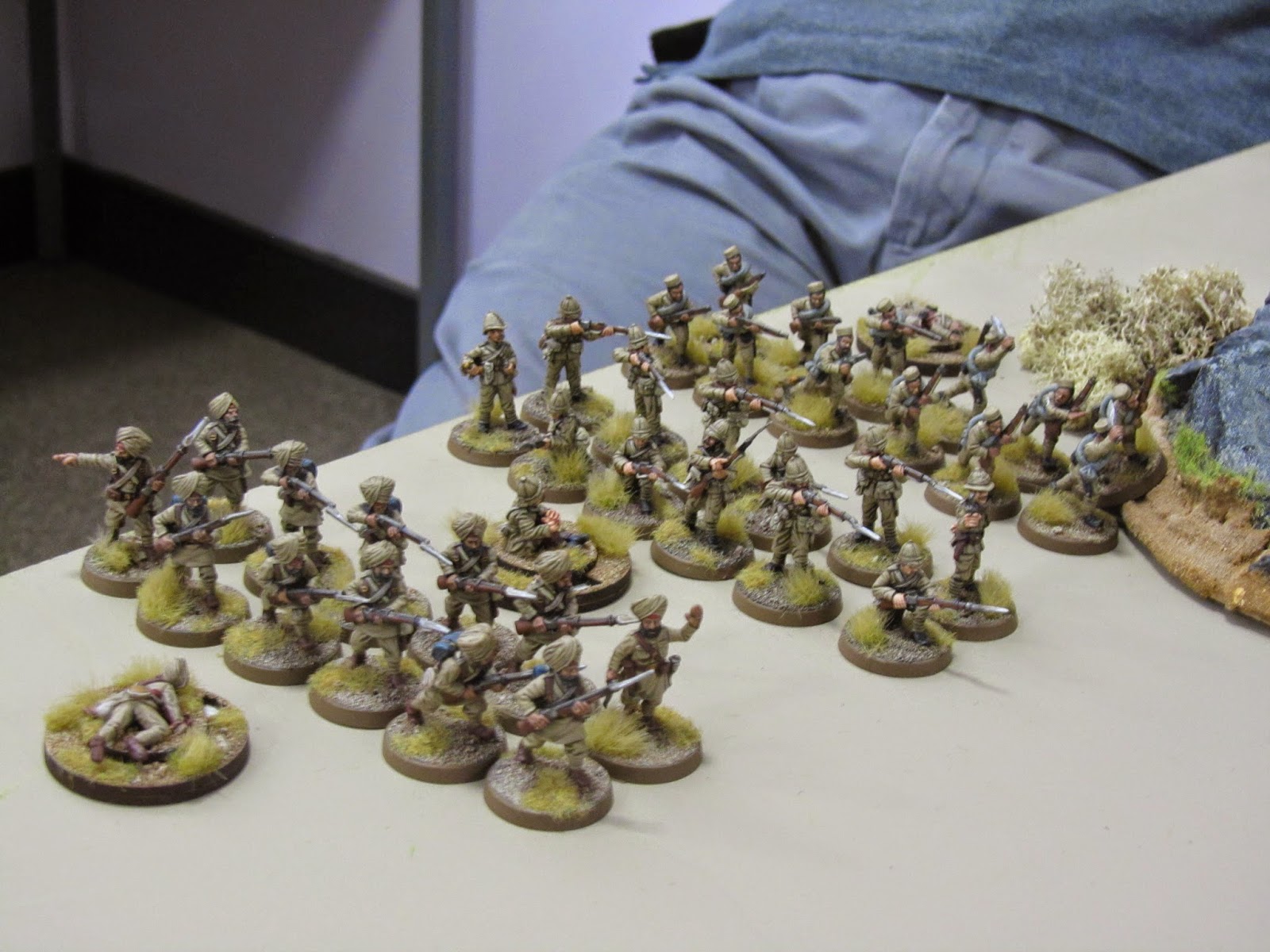 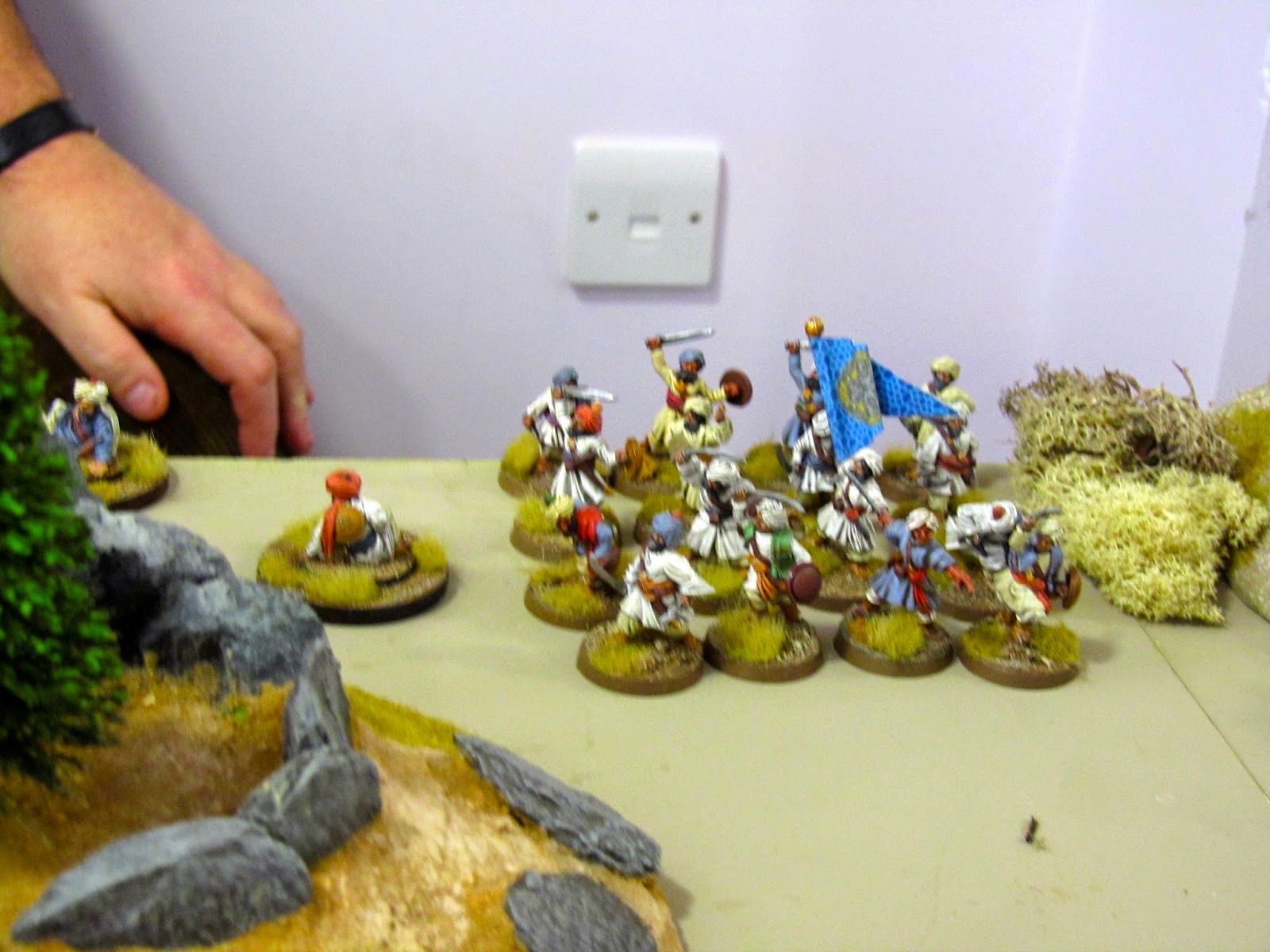 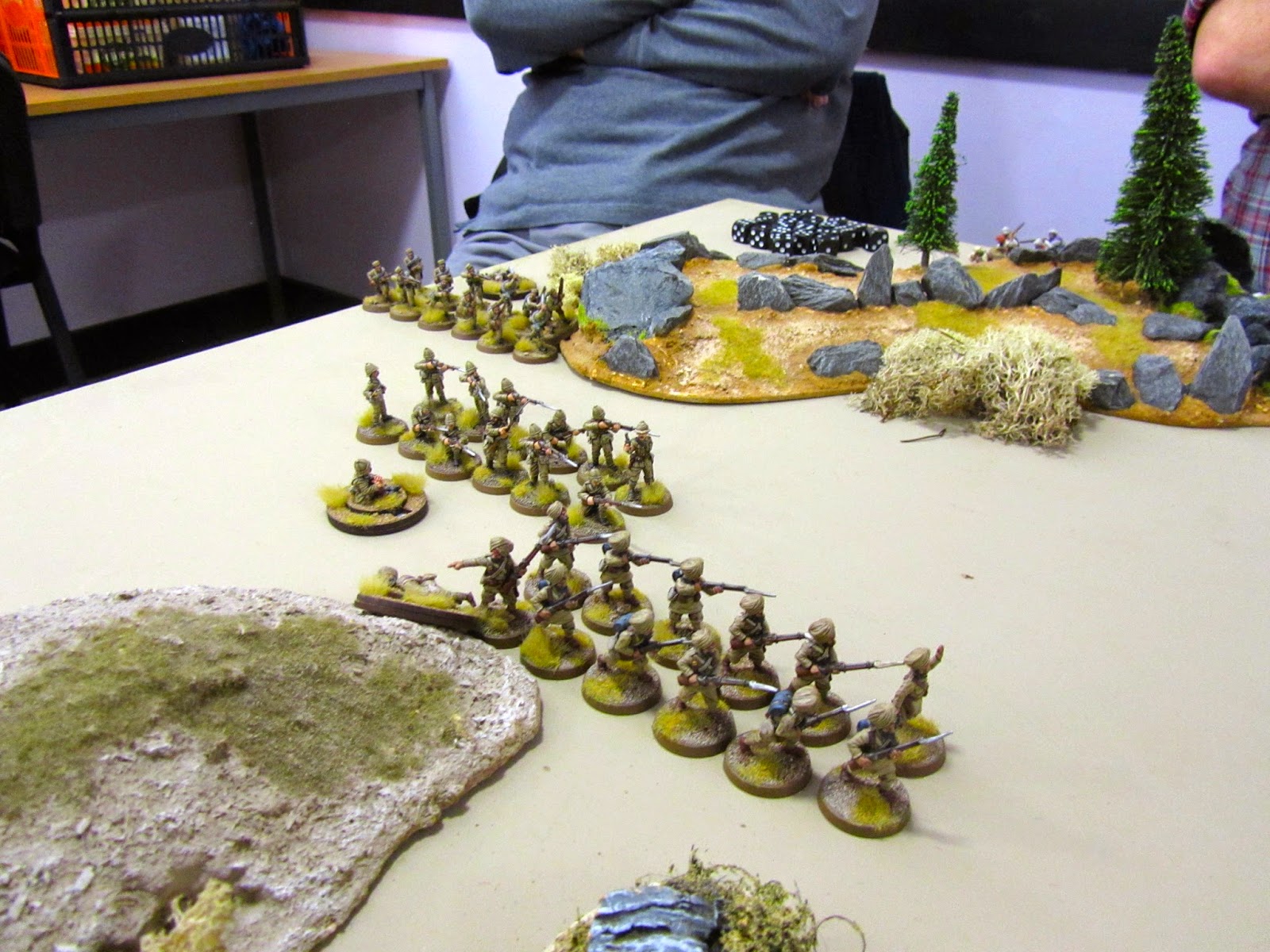 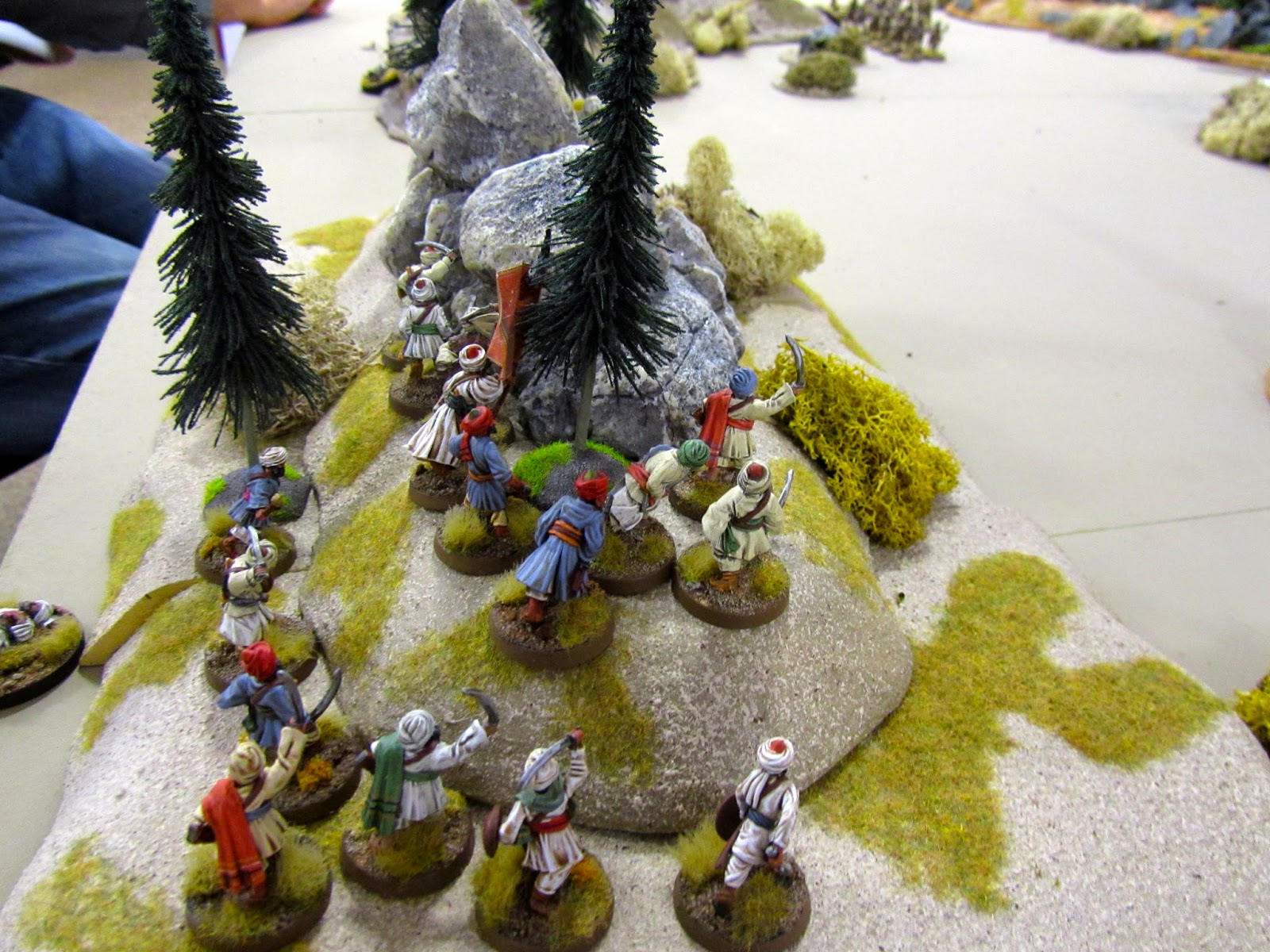 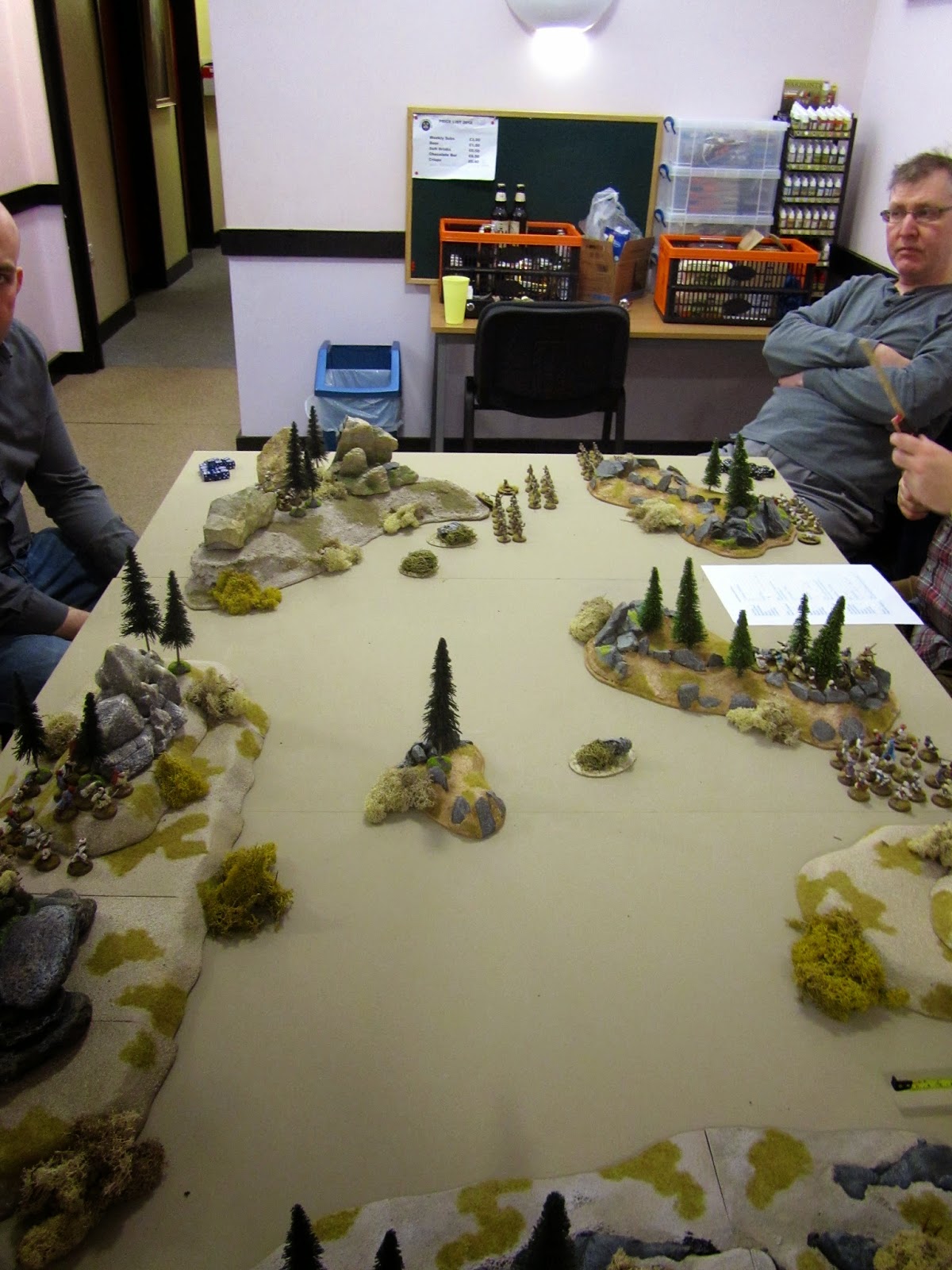 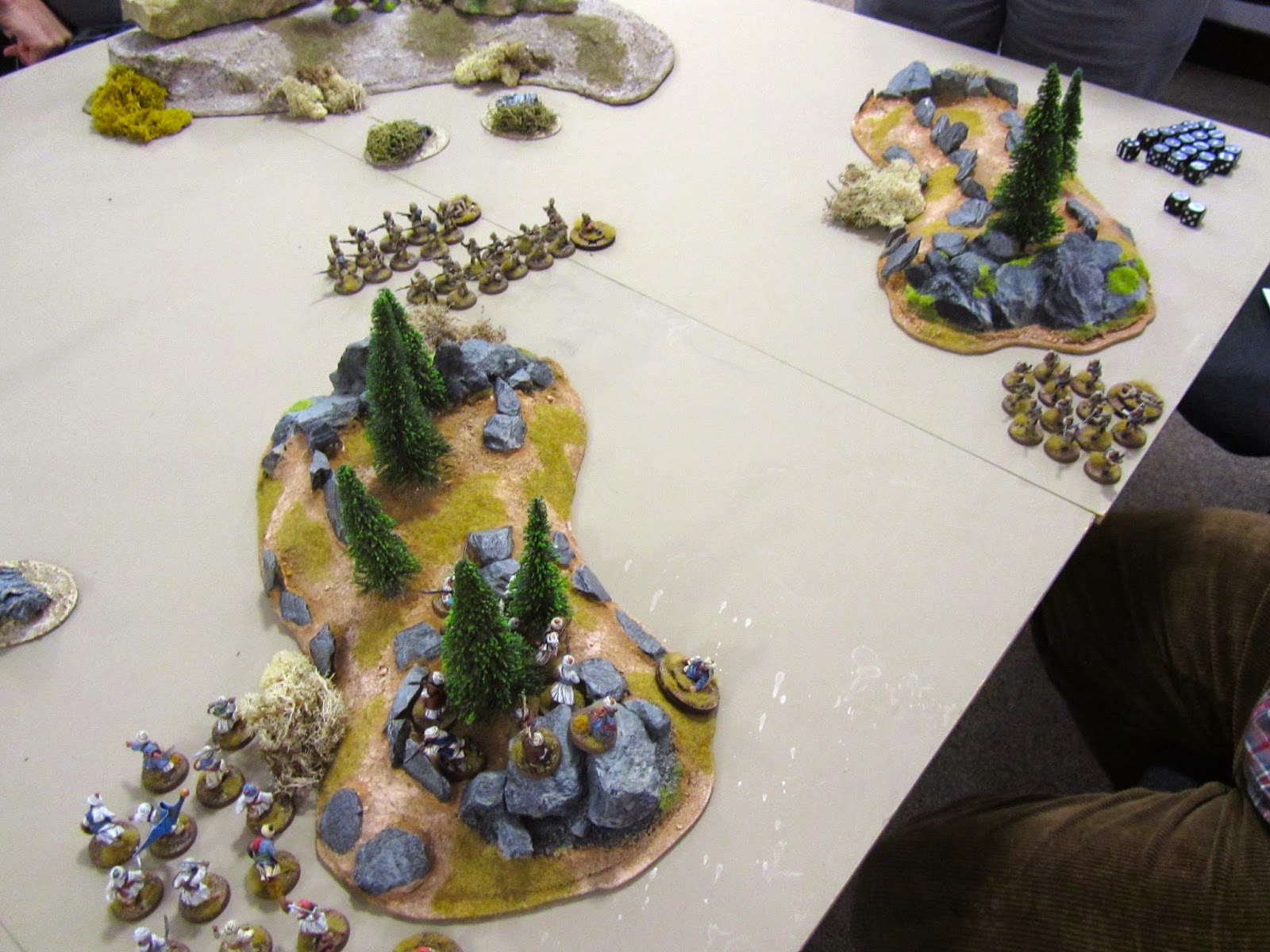 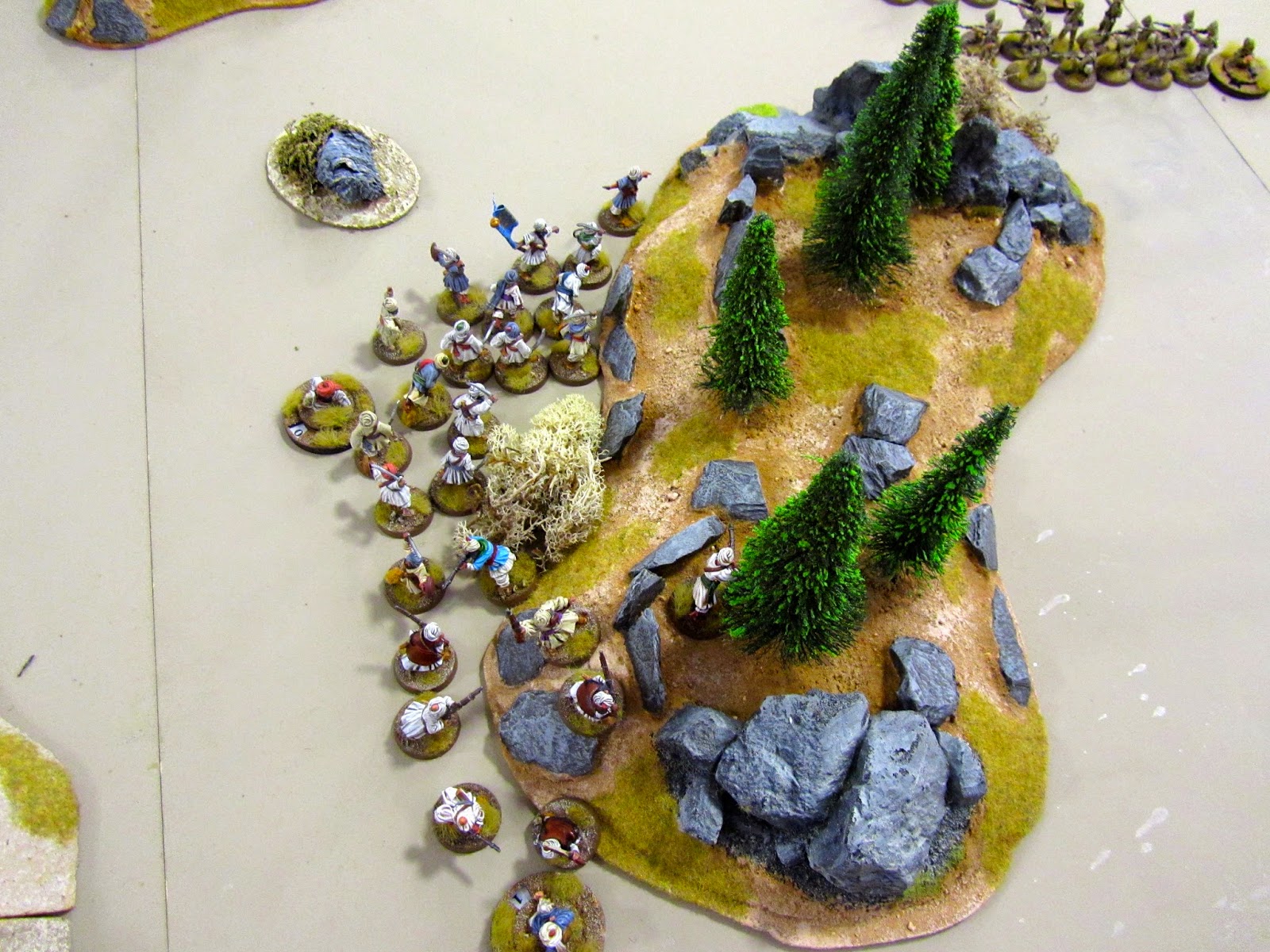 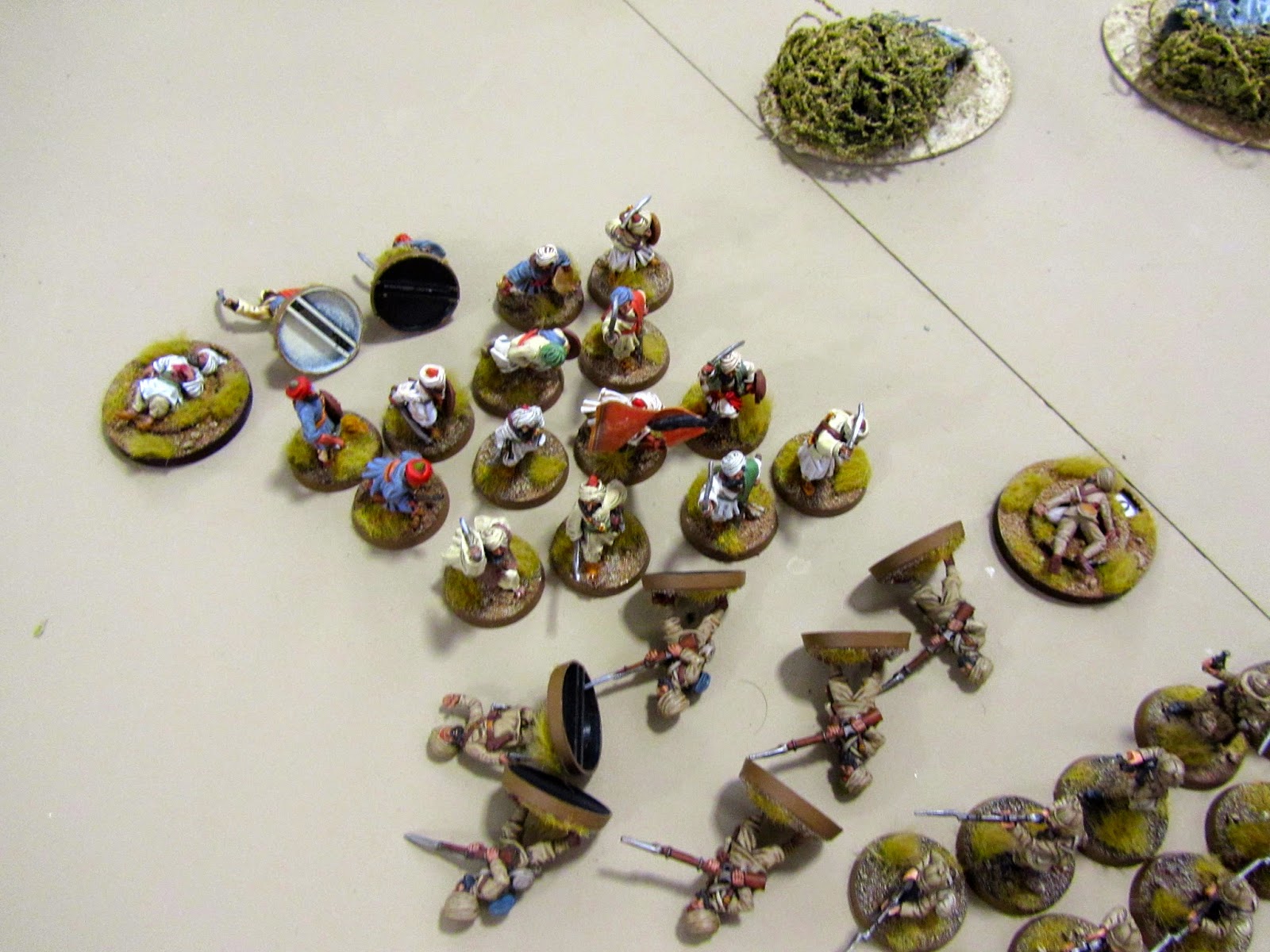 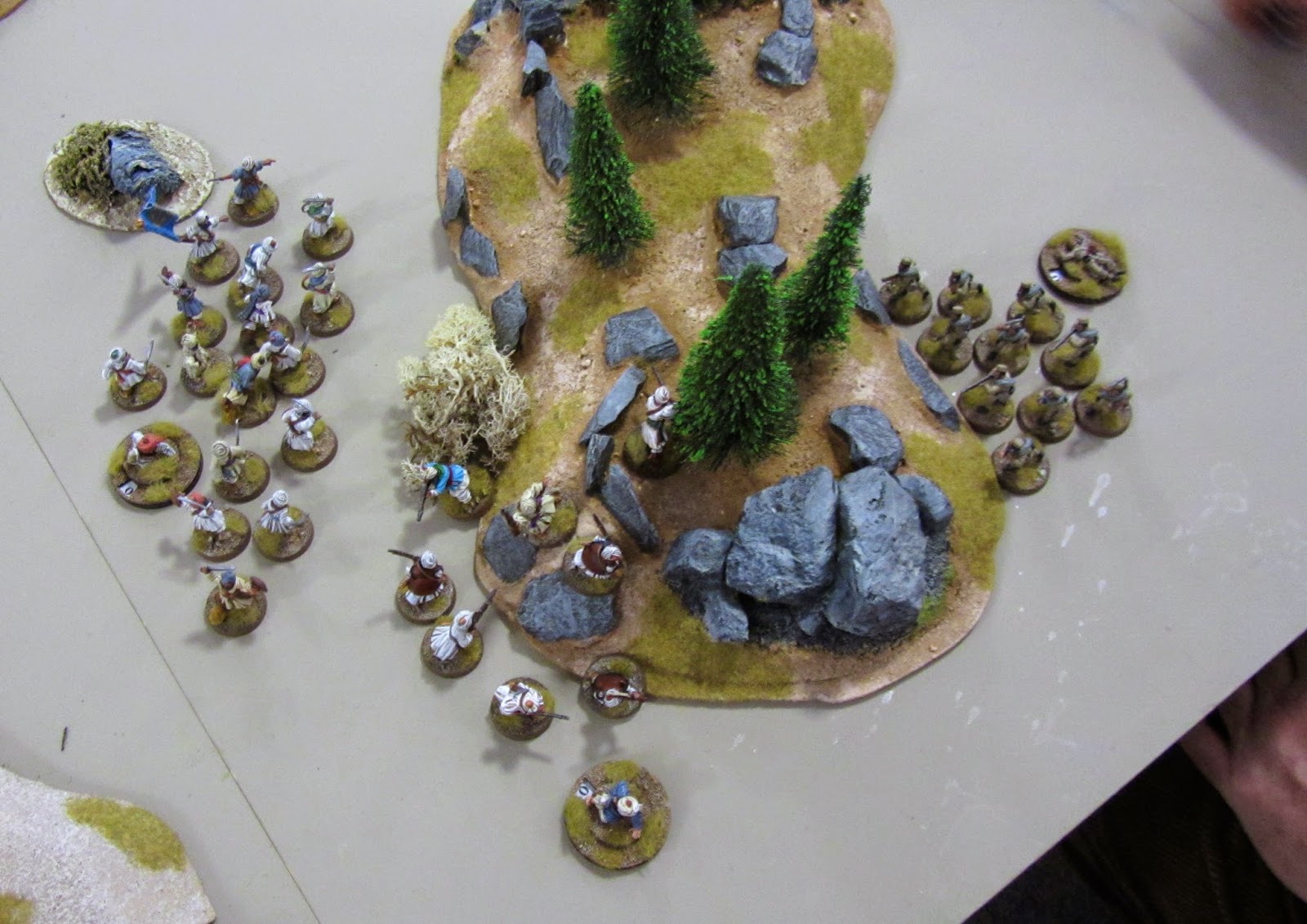 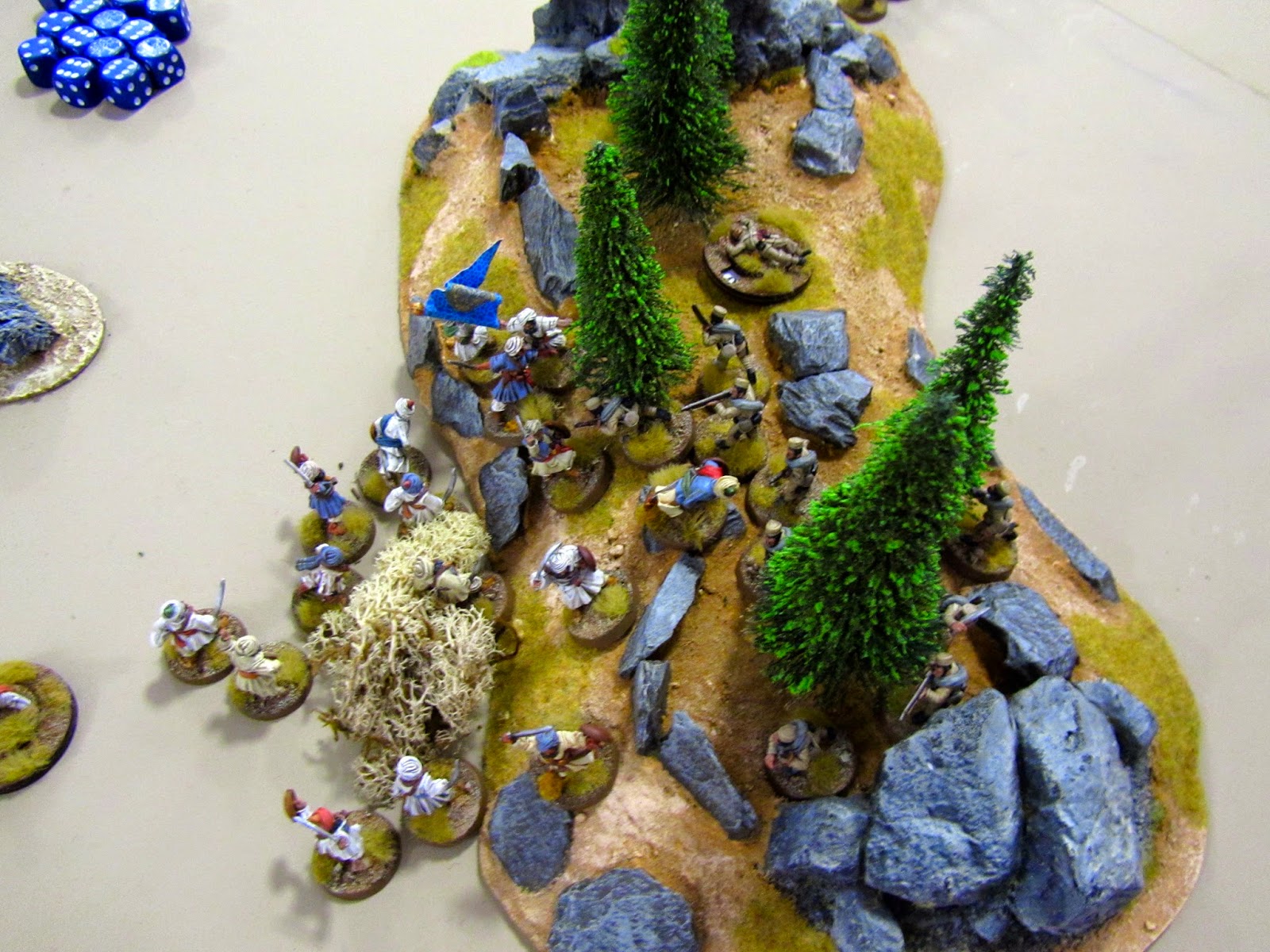 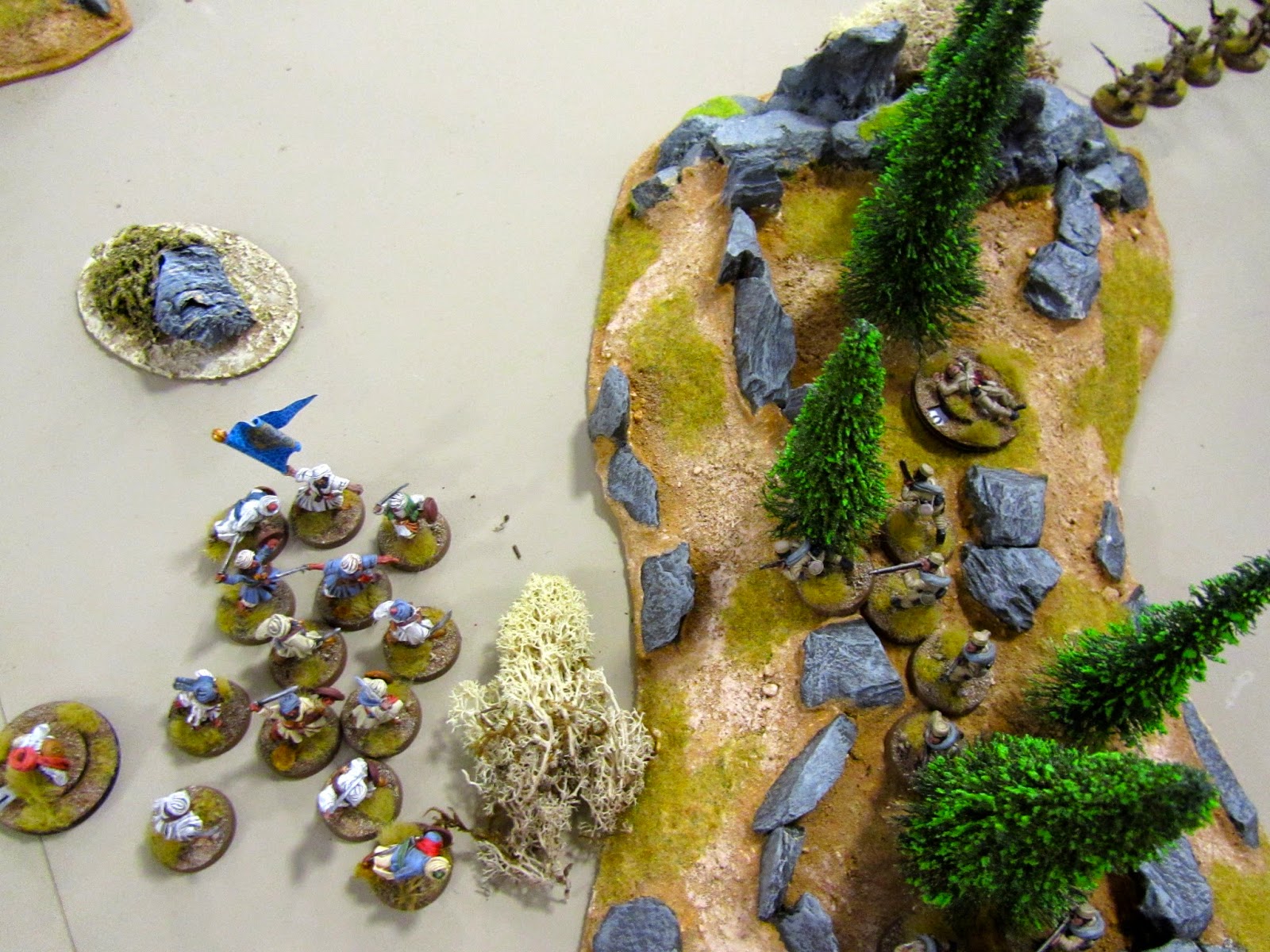 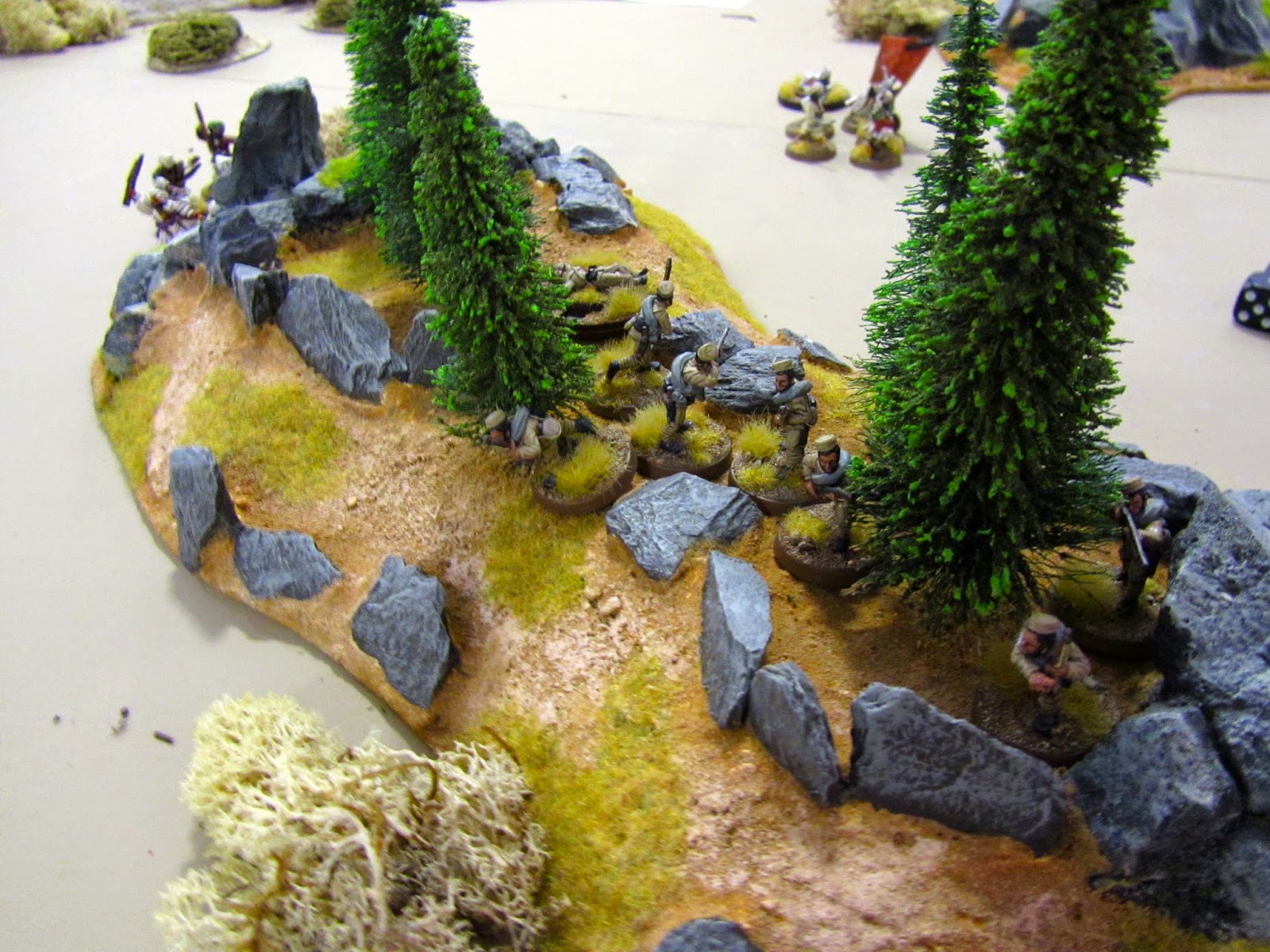 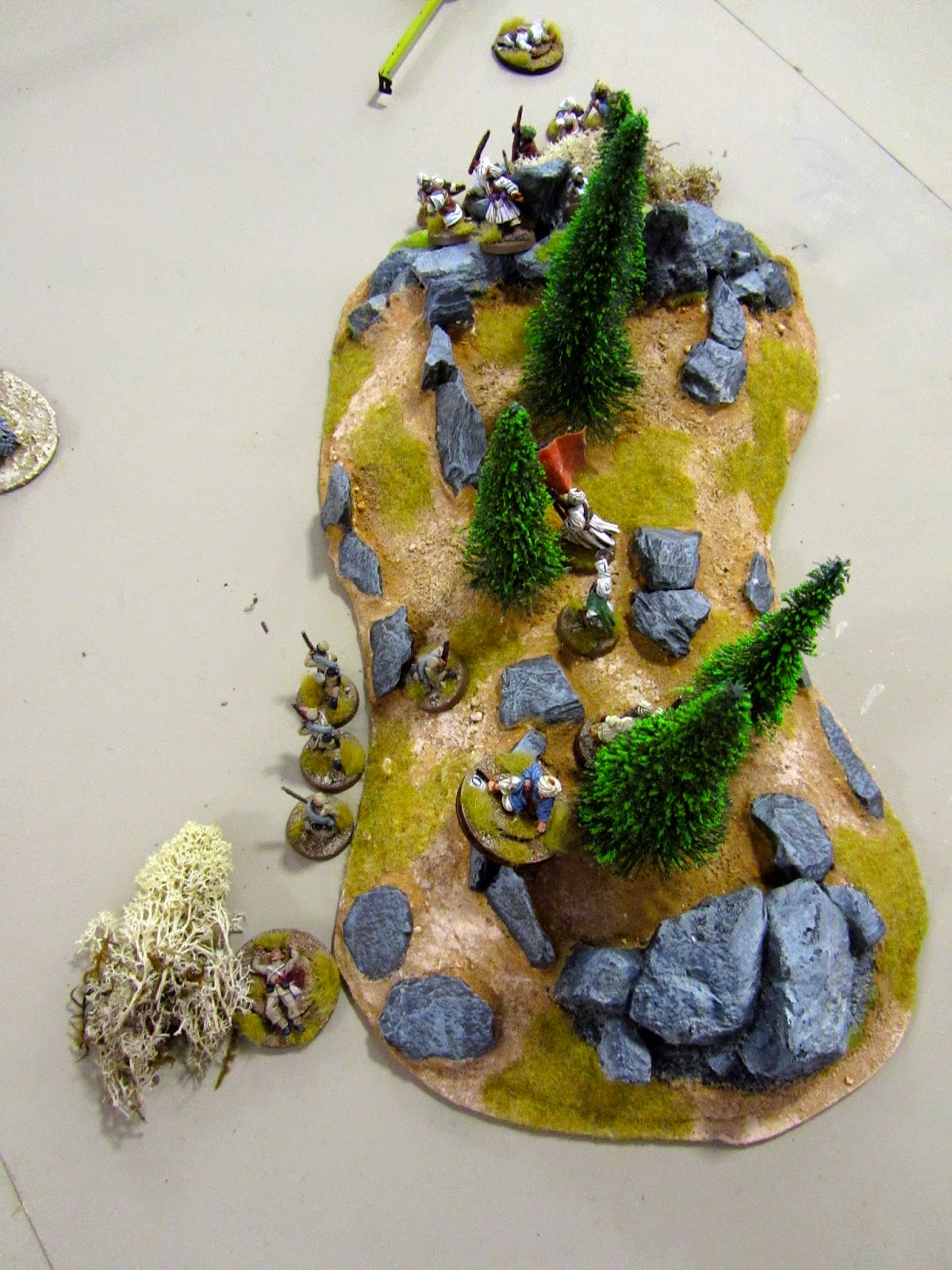 More Pathan reinforcements and a British mountain Gun are almost painted and will be in the next game...
Posted by GuitarheroAndy at 03:05 6 comments: