The Annals of Linnius Chapter 8: The City Has Fallen!

It is now Spring in the 474th year after the birth of our Lord and Blessed Saviour Jesus Christ. I, Publicus Librarius, scribe to his Royal Majesty King Mascuidius of Linnius do chronicle the days of kingdom and the coming of the dread Saex.

"Truly, the days of woe never end! After months of siege, the great city of Linnius has fallen to the savage barbarians from across the Saxon Sea! Even now, their warriors despoil and ravage the once great city, gateway to the North of the land of Britannia.

How can such a thing have come to pass? Truly, our God has deserted us...we must be sinners beyond belief to bear such tragedy and misery as this!

Our King, his most Royal Majesty, Mascuidius, did depart the city on the day before the fall, for the Saex did not closely invest the city to the South. I remained behind, for I knew that on the morrow, the Praefectus Lord Andrucius would lead our brave forces out to attempt the impossible and break the siege. Even though the city was not closely besieged, the Saex have kept close eye on what comes and goes. Nothing that could help our beleaguered city has been allowed in, so no food has reached us for months. The city granaries have been emptied and all animals slaughtered and we have been hungry. The soldiers did depart to fight without the comfort of hot food in their bellies and this is no way to fight a battle.

The Praefectus did visit me on the night before the battle. His Majesty King Mascuidius had given him orders to take to the field in one last effort to repel the heathen, but had informed the Praefectus that he expected no foolish heroics. "Better to live to fight another day if all seems lost," were his words to the noble Patrician. Lord Andrucius confessed his surprise at these words - mayhap His Majesty has had a change of heart about this whole sorry affair!

The battle plan was sound and the mood of the men was good, but it was not enough! The levy under Maximus Minimus won great accolade for holding the right flank of the line and denying it to superior Saex forces throughout the day. This was a feat of extreme bravery and great significance and the Praefectus has recommended the boy for honours. In the centre, the Praefectus did form the shieldwall on high ground outside the city and it did look for some time as though this would win the day, but by some miracle, no doubt inspired by their guttural and inhuman wailings to their pagan gods, the Saex Lord led his men in an assault that was beyond anything we have yet seen. Our men fell in droves and the noble bodyguard of Lord Andrucius, Bedwyr of the Swift Sword, did meet a noble death protecting his lord from the fury of the heathen.

Beaten in the fight, spirit broken, the warriors withdrew from the field of battle and the Saex allowed them to go. Clearly, the heathen brutes were already relishing the loot to be gained from the city.

So now, we stand at a crossroads. Defeat stares us in the face from every angle. We have lost a province from our small kingdom and now the Saex Lord is truly a Lord in his own right. We withdraw South to set up our capital anew and to rebuild our forces. There remain those amongst us who urge withdrawal across the Seas to Lesser Britain, but even there, Franks and Saex threaten the borders. What the next few months will bring, only our Lord and Blessed Saviour knows...

It's been ages sincethis game, so some things are a bit hazy...my apologies....but anyway, let's have a go!

Yup...beaten again!!! To be fair, at least this time, I played well! I was beaten by he fact that the pre-battle phase saw me attempt to give mead to my men and then throw 'interesting' dice for the effect. It meant we got the Bibamus cards in there, which are handy, but it also meant that my fate hand was reduced by one all battle. Mike gained a card in his pre-battle phase and his leader was also granted an extra level for the game, which was important. As it turned out, Mike was able to play the waiting game until he had amassed the best card hand I had ever seen. He attacked with aggressive charge, used the throwing missiles card with all his attacking groups (loads of dice...shock a go-go on my troops) and in the combat, despite having shieldwall on a hill allowing me to allocate hits where I wanted, the number of casualties he caused was so huge that the game was effectively over there and then. I threw five 6's when taking casualties on my elite unit, so that was them slaughtered and had to sacrifice my champion to keep Andrucius alive!! Luckily, I was able to effect a good withdrawal. Also, I had managed to cause a fair few casualties on the Saxons attacking my levy, while suffering very few. This meant that I only lost the game by 2 points. When you see the pics that'll amaze you, but there you go...that's Dux Brit!!!!

So I have lost a province. I now retire to a new capital and Mike will probably return to raiding to build up his warband and resources. That suits me, as I like raids better! However, I do think that the Saex are now well on the road to full victory in the campaign. It's just a matter of time - how long can I hold out? Watch this space! We play again on Monday evening...

Here are some pics from the game...they are in order so you can see how it progressed. 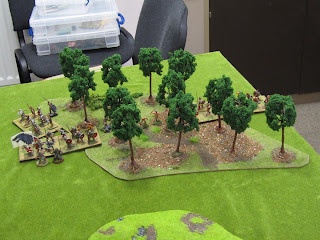 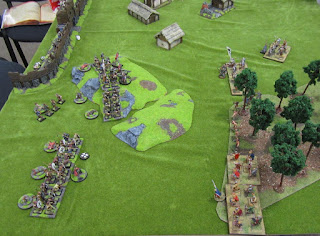 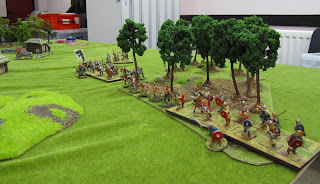 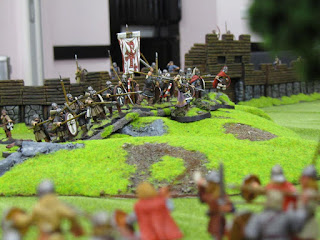 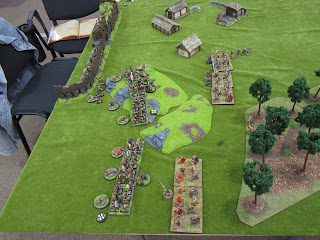 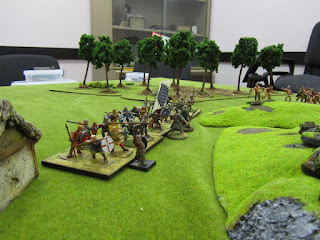 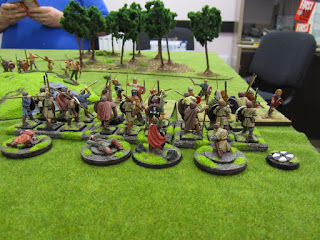 great battle report, I am going to be getting into a campaign with these rules this winter after I have bought and painted a force.
Peace James

My sympathies on your loss of the city. Hope the rest of the campaign goes well. You might want to remind your opponent what happened when he tried to regain some lost cows ;)