Working on a command base for my Silmarillion project evil army at the moment and decided I needed a banner to match that of the Elves.

Then I had a brainwave! What would be the one thing that'd p*ss off the Elves more than anything else (especially if facing the sons of Feanor)? A banner featuring the Silmarils themselves!! So the idea was born - Morgoth's Iron Crown, with the Silmarils floating above it in all their radiance!

Clearly the Orc Chieftain who fights under this banner has many Elven slaves who have worked on this affront to their race.

Working on the Chieftain and his banner bearer as we speak - hope to have them done just after Christmas... 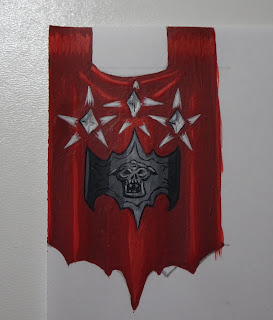